Rain or Shine took care of business Thursday night as they managed to squeak out a 108-106 win over the Globalport Batang Pier. It was an offensively oriented game for both teams, but it wasn’t the usual suspects for the Elasto Painters as Ryan Arana, Jervy Cruz and Chris Tiu all put in double digit scoring outputs.

The Batang Pier came out of the gates strong in this one, building and sustaining a double digit lead over a lethargic Elasto Painters team who repeatedly let Sol Mercado get into the lane and score on drives to the basket. At the half, In the 2nd quarter, Rain or Shine was able to come back and tie the game only to see Globalport once again build another huge lead in the 3rd. Digging deep, ROS clawed back once again and managed to play toe to toe basketball against a Globalport team who lost Coach Baculi to an ejection into the dying seconds of the game.

Clinging to a one point, 104-103 lead with less than 20 seconds left, Gabe Norwood launched his sixth three pointer (he was 1/5 at this point), which found the bottom of the basket and sealed Rain or Shine’s trip to the semi-finals.

Let’s see how Coach Yeng and his crew did in terms of our keys to the game:

Washington was clearly still feeling it coming from his explosive performance in their last game. In this game, he finished with 18 points on 47% shooting (40% from deep, 60% from inside the arc). The Rain or Shine defense allowed Washington to get his and I’m actually fine with that. What I’m not fine with is the lack of defense in this game from ROS. More on that below.

This key was originally supposed to be about stopping Mercado, but it seemed that the Elasto Painters were perfectly content with allowing both Mercado (22 points, 47% from the field) and Cummings (29 points, 50% from the field) to routinely take apart the ROS defense both inside and outside. Mercado was allowed to waltz into the lane early and often as he finished with 11 points in only the first quarter while Cummings drew foul after foul after foul on the slow-footed ROS defenders as he was able to get to the line 20 times, making 16 of them. Add Washington’s 18 points on 47% shooting to that and Rain or Shine was very, very lucky to come out with a victory here.

Good thing Ryan Arana, Jervy Cruz and Chris Tiu stepped up to the plate for the Elasto Painters as the team was able to buckle another poor shooting night from Jeff Chan (Six points, 3/11 from the field, 0/6 from beyond the arc). 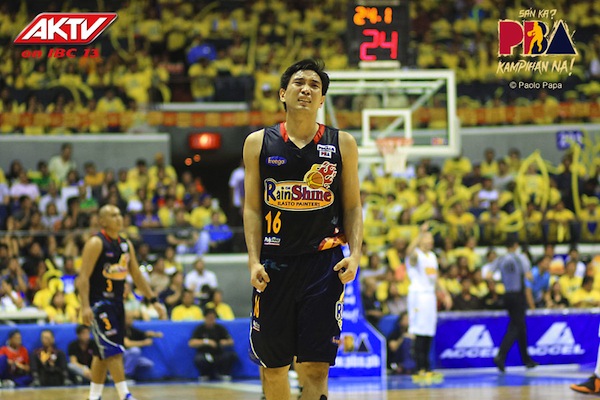 It definitely wasn’t pretty, but for Rain or Shine, a win’s a win. Up next for them would be the top-seeded Petron Blaze Boosters in a best of five semi-final series. I won’t pre-empt my series preview, but if the defending champs continue to play like this, then we’ll be done by October 3, after three games.

Not if the team continues this level of play (Photo Credit: http://instagram.com/nikkorms)