The Barangay Ginebra San Miguel experienced yet another disappointing, early exit in this season’s Commissioner’s Cup. After struggling through an elimination round that featured three imports, the Gin Kings were eliminated by Talk N’ Text in the quarterfinals, sending the team into yet another off-season full of reshuffling and questions. 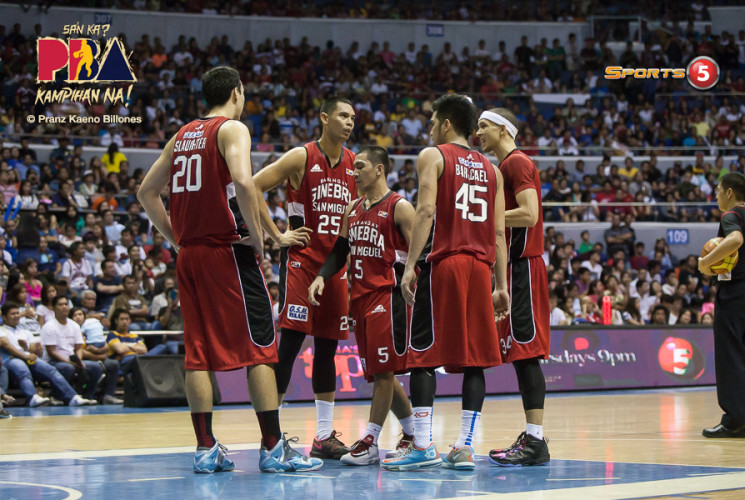 There is no denying the talent of Ginebra’s roster, but just how bad was the team’s performance this conference? In this first part of a two part series, we take a look at how the Barangay fared in some key statistics vs. other teams in the league this conference.

Note: The statistics used for this post will be totals and averages of the league in the elimination round of the 2013-2014 Commissioner’s Cup.

To get a team’s efficiency differential one would take the team’s offensive rating (ORTG) and subtract it from their defensive rating (DRTG). It’s a simple concept really, the more you score and the less your opponent scores, then the better your differential will be.

Well… Ginebra had the 3rd worst differential (-3.5) in the conference, with the teams that missed the playoffs, Barako and Globalport rounding out the bottom two teams. In the NBA, Efficiency Differential is a strong indicator of how good a team really is. The relationship hasn’t yet been established in the PBA, but it does paint a clear picture of the team’s rankings in this case.

Ginebra gave up the 2nd most points in the league this conference, giving up 97.8 points per game, while also ranking 9th in opponent FG% at 44.3% and worst in opponent 3PT% at 37.6%.In addition to this, the Gin Kings also allowed their opponents to shoot the most free throws per game, giving up 29.2 charities a game. Lastly, opposing teams had the easiest time moving the ball around against the Barangay, with their opponents averaging a league high 20.9 dimes against them.

Ginebra is known for their run-and-gun style of play — a style of play that they don’t necessarily follow (more on that later). Which is why it’s weird to see Ginebra, despite not being a fastbreaking team, being eaten alive in transition. Gin King opponents averaged the 3rd most transition attempts and the 2nd most transition points this conference. They were lazy at running back to defend the leakouts because they were too busy waiting for the kickout (that might never happen) or fighting for rebounds (which they weren’t particularly good at, ranking 4th worst).

Run-and-gun, The fast and the furious – that’s what most fans associate with Ginebra. However, in this (and in previous) conferences, that style of play has largely been absent from the Barangay’s arsenal. They ranked dead last in fast break attempts and points per game and 6.4 and 7.2 respectively. Maybe that’s something to be expected since players who made up a big part of their offense like Slaughter and Rogers don’t necessarily have the fleetest of feet on the court.

In terms of shot attempts, Ginebra was right around the league average at 80.3 shots a game, with a shot distribution ratio of 70:30 between 2pt field and 3pt field goals. Sadly, we still don’t have the ability to map out where a team takes their shots, but looking at the available statistics, we see that it might have benefitted Ginebra to have focused their offense more inside the arc since they were the 3rd worst 3pt shooting team at 28.1%, but had the best clip inside the arc at 47.2%. Their success from inside the arc also translated to their free throw attempts, averaging the 2nd most attempts per game at 29.3, but only converting 68.2% of the charities.

Note: The PBA averaged 68.8% from the free throw line this conference as compared to the NBA’s 76% average this season. The sample sizes are really far apart, but this may be seen as an evidence of the disparity in skill between the PBA and NBA, since free throw success is a direct result of a player’s skillset. For more on averages, check out Nico Baguio’s post about averages and the PBA.

In this post, we took a look at how Ginebra performed as a team. In part two of this post next week, we will marry the statistics seen here with individual player statistics to hopefully come to some conclusions about Ginebra’s struggles this conference.