Last year the Soaring Falcons had two sets of brothers, the “Splash Brothers” in Jerrick Ahanmisi and Robbie Manalang, and the “Bounce Brothers” in Sean Manganti and Tyrus Hill. Half of each set have left the team, one by graduating, the other by slithering away to a US-NCAA D-1 team (or did he?).

Robbie Manalang provided not just a huge source of firepower for the Falcons, but also more than capable ball handling, using the second most possessions of the Falcons last season at a 23.6% usage rate. His departure means point guard duties now fall on Jerie Pingoy’s shoulders who unlike Manalang, is not known as a points-maker, but for his playmaking ability.

On the other hand, the Falcons suffered a blow to their prospective chances when Tyrus Hill announced his departure from the team in order to play for a NCAA D-1 team Stateside. Coach Franz Pumaren had long praised the athletic ability and the overall potential of Hill who gave fans a taste of what he could do last season by putting up a slew of highlight plays.

But all is not lost. His departure meant no longer having the third biggest turnover liability among the second stringers, who had a 24.1% turnover rate last season. Both players that had higher turnover rates than Hill will NOT be returning to the roster either. 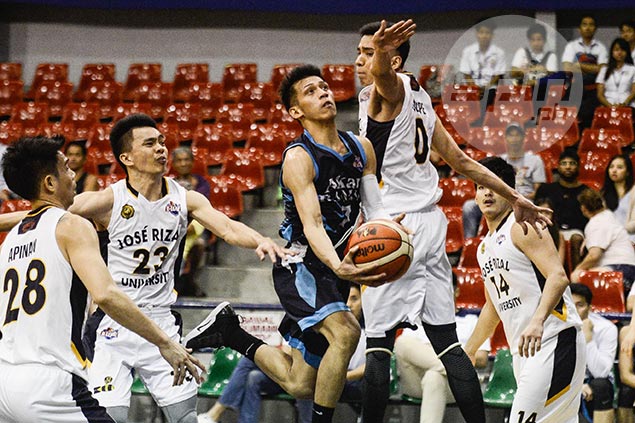 Over the summer tournaments, the Soaring Falcons found a diamond in the rough in Jerome Lastimosa. They’ve wasted no time in polishing this soon-to-be-gem. Though a rookie standing a few inches shy of 6-feet, Jerome has shown that he is not one to shrink in the spotlight. Earlier in the year he dropped 13 points in the PBA D-League tournament. The D-League, where he was up against professional athletes. To add to his growing list of shining moments, he bagged the UAAP skills tournament championship before the start of Season 81.

Look for Lastimosa to provide more ball control for the Falcons on offense while whipping out his own brand of chaos on defense.

While Pumaren and his staff were busy polishing off their prized rookie, Sean Manganti, the remaining  Bounce Brother was busy polishing his jump shot. Throughout preseason tournaments it was evident that the Falcons were looking for Manganti to shoot from outside more often. Expect Manganti to take more than the 2.1 three-point shots he took last season. Adding this facet to his game creates space not only for himself but more importantly for his teammates. All eyes are now on the sharpshooting Jerrick Ahanmisi who has proven that he’s not one to back away from the challenge of leading his team. In previous years the Falcons have been content to just let Ahanmisi find himself within the offense. Ahanmisi finished Season 80 with a team high 103.3 offensive rating which many felt was not maximized because of his 18.4% usage rating. But with the absence of fellow gunner Robbie Manalang, Ahanmisi will be forced to take on more of the scoring load.

Jerie Pingoy came up big for the Falcons last year, making his mark as a creative ball distributor and potentially becoming the fuel that will ignite the Falcons’ offense. The former juniors MVP used his outstanding ballhandling ability to get his teammates easy touches to the tune of a 47.6% assist rate at 5.1 assists per game.

Basketball is won by scoring more points than the opponent (“No shit sherlock!” – Angry commenter). How teams achieve this is what sets them apart from other squads.

Last season the Soaring Falcons solidified their identity as the premier defensive team of the UAAP. Holding opponents to an average 62.4 points per game, the Falcons were stingy when it came to allowing opponents to score. The patented Pumaren fullcourt press resulted in the most turnovers forced with 23.9% of opponent possessions ending in turnovers. The problem they faced all season long was getting consistent offensive production.

While able to keep even the best of their opponents to below 90 points, the Falcons’ own scoring ability was not as steady. While maintaining the ability to score 95 points in a game, but going as low as 65. Any game they failed to score 80 points, they lost, except against UP.

With this in mind, the key objective of the Falcons is to raise their offensive consistency because we all know that they’re already an incredible defensive team.

Fortunately for the Falcons, only two teams really had the ability to stifle their offense, the Green Archers through their mayhem defense and the tight grip of the Blue Eagles, and with mayhem starting over at the home of the Growling Tigers, that number is down to one.

KEY QUESTION: How much fuel is in the tank?

Admittedly the Falcons offense relies on sheer firepower. Their fullcourt trap challenges opponents to burn fuel while limiting possessions. With the Falcons, games are a battle of attrition as they try to smother their opponents while exploding on the other end. Unfortunately, this means that those explosions consume a ton of fuel. While they’ve shown that their outbursts have been more than enough to blaze past lesser teams, will they have enough fuel in the tank to hit those afterburners against the top-ranked ones? 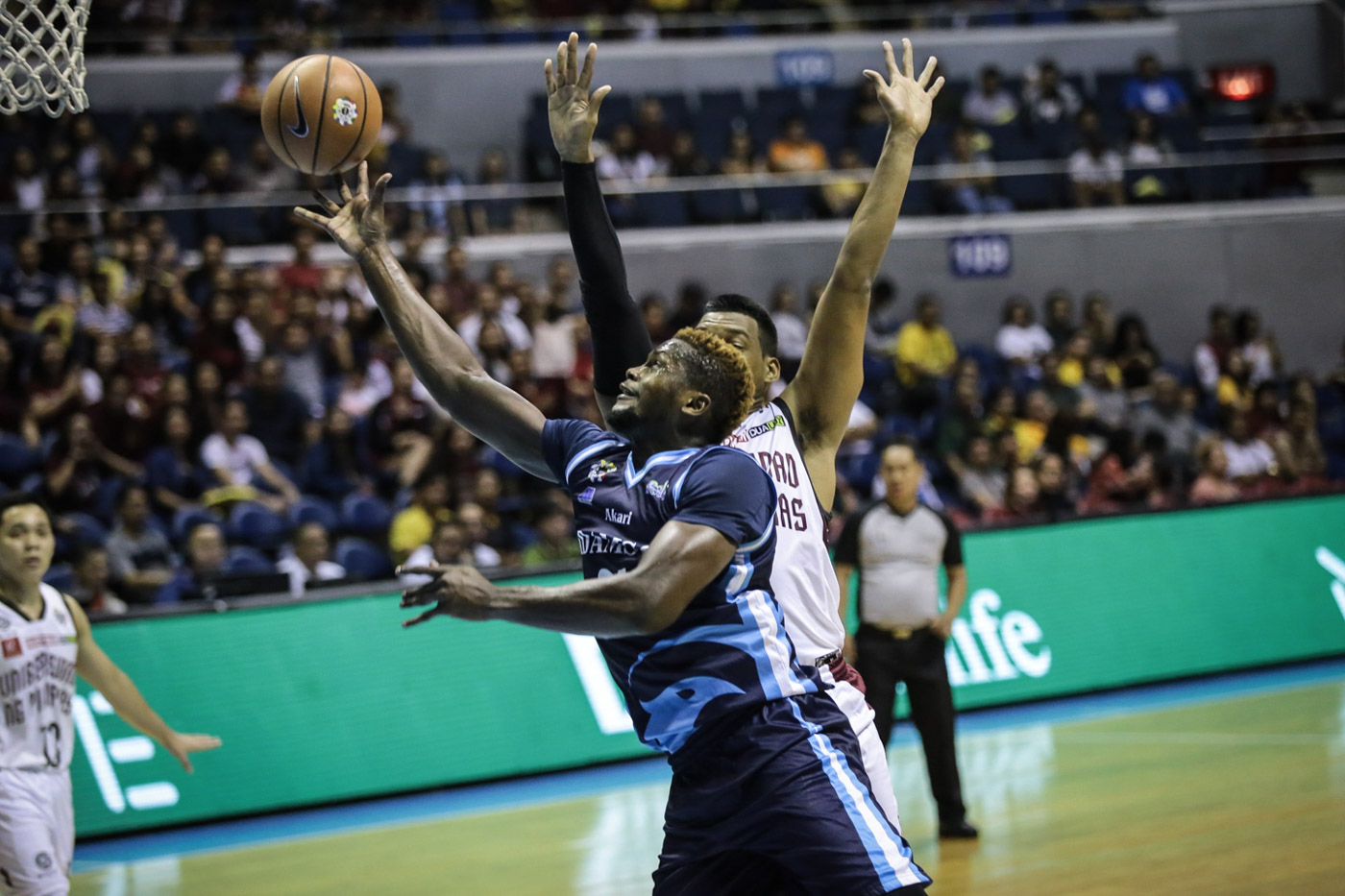 Starting from Season 78 when Coach Mike Fermin took over the coaching duties from Kenneth Duremndes, Papi Sarr was immediately the focal point of their offense. The first half of that season was spent learning ways to and means to get Sarr the ball in the post.

When Pumaren took over, things changed. The Falcons grew wings and so Papi was no longer the be-all and end-all of their offense. Don’t mistake that for his contributions becoming any less significant.

All championship caliber teams know that a balanced offense is one of the keys to winning. Using the post to open up the arc and vice versa has spelled success for teams in the NBA and even the PBA.

With all the shooters at the disposal of the Falcons, Papi Sarr will play a literal pivotal role in managing their offense. He may no longer be the focal point, but being a force in the post will help the Falcons consistently generate points off high percentage shots down low, and eventually open up the game for everyone else.

Recapturing his Season 79 form when he averaged 14.4 points and 14.9 rebounds a game would cement the Falcons’ status as Finals contenders.

PREDICTION: 10-4 after the elimination round, champion over the Ateneo Blue Eagles after overcoming stepladder

When Coach Franz Pumaren first signed with the Soaring Falcons after Season 78 he promised to bring a winning culture and a championship. From day-one, Franz has delivered on that first promise. His players no longer eat themselves up in self-doubt, all of them confident of the direction being given to them by the seven-time (seven-time!) UAAP champion.

The Soaring Falcons started as a team that was among the worst in the league (second-worst offense, worst defense in Season 78, then they improved into having the second-best offense in Season 79 (91.3 ORTG), while following it up by turning into the best defensive team in Season 80 (84.8 DRTG). The team has consistently improved and the numbers show it.

From a net rating of -11, Adamson improved to +5 and +7.6 in a span of two years. Couple this with the retooling of old weapons and the maintaining of their defensive prowess, it becomes a recipe for contention.

Trimming down the fat and creating a more focused offense around clearly defined roles is expected to raise their already high offensive production. Pingoy was already having a field day chopping up the defense last season, so he’s going to wreak havoc using the minutes Manalang left behind. Not to mention his targets Ahanmisi and Manganti, the former already a tough assignment because of his smart off-ball movement and the latter becoming a pick-your-poison type player after adding a polished jump shot to his arsenal of offensive weapons.

The time is right for a serious championship push. Ahanmisi, Manganti, Pingoy, and Sarr all have enough experience and confidence to see this through. With La Salle crumbling in the offseason, the defending champs Ateneo stands as the biggest roadblock to the championship.

Last year Adamson was already able to match the net rating of DLSU which knocked them out. With their key players leaving, DLSU’s offensive ability is expected to take a dip. This leaves Ateneo as the last remaining roadblock.

While Ateneo may still have its core players in Thirdy Ravena and the Nietos, Adamson has the firepower to match their output. Ravena is a matchup nightmare (for any team, really), but this is where Papi Sarr’s experience will come into play. Underneath the basket, Papi will likely be met by Ateneo’s Kouame, who despite his impressive Jones Cup run is still a raw rookie. Using Pingoy’s playmaking, Sarr should be able to gain some form of advantage down low. Manganti, on the other hand, has to brace for impact against Thirdy.

It’s highly likely that Ateneo will sweep the elimination rounds given the unparalleled talent of their coach as evidenced by their Jones Cup stint, but lucky for Adamson and the Soaring Falcons hopefuls, nobody knows more about beating Ateneo and winning a championship after climbing the step ladder than Coach Franz Pumaren. This is admittedly a bold take. But I’m willing to take my chances on a group that’s looking to fulfill the promise of a championship.