UAAP Season 81 Preview: A Bright light at the end of the tunnel for the UP Fighting Maroons?

UP has long been a premier institution in our country. Producing a long line of industry pioneers and movers, UP has excelled in most (if not all) of the things one can think of.

UP? Magaling ‘yan. ‘Hindi nga lang sa basketball. It’s been a long running joke but to tell you honestly, it’s not fake news – This is backed up by facts.

But taking into consideration what has happened with the Maroons in the past (i.e. multiple coaching changes), it’s not that bad. They were bad relative to their counterparts, but the situation really wasn’t. Based on the upward trajectory of their number of wins, UP was improving; as the namesake of UP’s solid fanbase says, there’s “Nowhere to go but UP”.

And “UP” they went last season. With Coach Bo in tow for his 2nd season, it was somewhat a more stable year for the Maroons. If not for a few breaks of the game here and there, they would’ve finished in the Final Four last year.

Another losing season, but it was THE breakthrough season for UP. It was kind of frustrating because they were just one Adamson win away from making it to the Elite Four.

But that fact says a lot about the program – It wasn’t there yet. If we play our favorite game of ‘what if’, they could’ve finished last season 10-4 at best (good for 3rd in the standings) had they won those games they barely just lost.

Ouattara was a huge surprise last season for the Fighting Maroons. After two years of waiting and serving his residency as per the league’s rules, and to almost not being able to play a few days before the season started, it was such a great sight to see Ouattara contribute for the Fighting Maroons.  He was the inside force UP’s needed for the longest time, wounding up as among the top players in rebounds and blocks beside the likes of Ben Mbala, Steve Akomo and Papi Sarr. Although he wasn’t that polished compared to his counterparts, Ouattara’s work ethic was what made him very special. He was the inside presence UP needed after struggling season after season inside with Andrew Harris holding the fort down low.

Another player that will be missed by the Fighting Maroons is Noah Webb. His effort on the defensive end was what made him a regular in Coach Bo’s rotation. He reminded me of a young Cliff Hodge – a rugged, grit and grind type of player that will do whatever it takes for his team to win. Last season, he ranked 2nd in the team in terms of the hustle stats (3.9 BLK% and 2.9% STL%), the kind of effort that will not be easy to duplicate.

Bright Akhuetie. No question, he’s the biggest (literally and figuratively) addition to the UP Fighting Maroons Program since (the disappointing) Mike Silungan (that was a loooooong time ago – ed). He was a two-time Mythical Five member in the NCAA and will be treated as an instant double-double machine in the UAAP. Bright’s presence gives Coach Bo a different dimension with regards to his offense, with his size, heft and craftiness under the hoop complimenting the guard play of UP. It would be no surprise if he replicates the USG% of his supposed to be rival, Ben Mbala at 33.7% (league-high).

Will Gozum. He’s back home. The former NCAA Juniors MVP (13.8 PPG, 9.9 RPG, 1.3 APG, and 2.6 BPG) is a solid big man that can play a key role as back-up to Javi Gomez de Liaño at the four (4) spot while learning the ropes in his first season in the Senior’s Division. Rookie of the Year? It could very well happen.

David Murell.  Based on his performances in pre-season tournaments, this guy can score and take flight for highlight-reel plays. He will be an integral piece in Coach Bo’s secondary unit. Much like how Tyrus Hill surprised the league when he first came in, this guy could very well do the same, if not better.

Jaydee Tungcab. A shot maker off the bench. This former Adamson Falcon has the skills to penetrate the shaded area with ease. His stint with Adamson was not that impressive, only able to produce 6.9 PPG, 2.9 PPG, and 1.4 APG. But there is no denying his pure talent which made him such a highly recruited prospect out of High School. Maybe he can turn things around and take over as primary scorer/facilitator when Paul Desiderio is on the bench. Coming into this season, Paul Desiderio has a lot more help and (hopefully) won’t resort to creating his own shots anymore (resulting into a dismal 12.3 PER despite a 25.1 USG%, sixth in the league). His talent alone last season propelled him to the MVP conversation finishing as the 4th best scorer (13.4 PPG).  Flaws and all, his back-court tandem with fellow Cebuano Jun Manzo was a joy to watch. It seemed that they were in sync all the time. There’s no question about Manzo’s playmaking ability. (finishing Top 10 in terms of assists last season). With continued training with Skills Coach Alex Cabagnot, his game can only get better.

Joining Desiderio and Manzo as the team’s key players are the Gomez de Liaño brothers. These two were always side by side at the top with the Cebuano Duo in terms of PER (Juan 18. 1, Javi 18.1), PPG (10.8, 8.3), RPG (6.2, 5.9), APG (2.5, 1.3), and SPG (1.1, 0.8). Last year’s Rookie of the Year can only get better, as he’ll gain more space to attack off the attention given to his surrounding teammates. Despite not receiving as much attention compared to his highly touted brother, Javi continued to work hard in the offseason to improve his game. It will be exciting to see the things he was able to pick up from his D-League stint with Marinerong Pilipino-TIP (he had the chance to play as a guard compared to his usual stretch 4-spot).

Although UP won six games last season, most of those wins were because of pure talent plays – isolations, bail-outs long range bombs, heat checks, among others. UP had the luxury of having players who were good at creating their own shots but this was not a sustainable way to play all season long. They could have made it to the Final Four, but this way of play hindered them from reaching that dream.

Although UP was the 2nd best team in terms of taking care of the ball (17.9 TOV% next to ADMU), it was quite evident that their offense was not that fluid with an assist to turnover ratio of 0.77 (2nd to the last in the league with UST at the bottom recording a league-worst 0.68). They weren’t turning the ball over, but that was also because most of their baskets didn’t come off ball movement. Aside from this, they ranked 7th in terms of field goal shooting (42.7 eFG%) and 6th in terms of offense (85.1 ORTG).

Coming into this season, with Bright at the center of the offense along with added pieces such as Jaydee Tungcab, a more potent offense is expected from the Fighting Maroons. With the defense collapsing at the middle, it will be key for Bright to locate the other guys and for these other guys to swing the ball and locate the best available shot.  Ball movement is key.

There’s no doubt regarding the skills Bright has, his numbers in the NCAA speak for themselves. But the question remains: “Can he bring this type of play in the UAAP?”. Aside from the weight and conditioning issues, there’s buzz about the big guy’s on-court behavior/attitude. Will he be like Mbala and deliver a title to the land of green and maroon? Or will we see yet another disaster in Diliman?

Read more: Are there Brighter things to come for the Fighting Maroons?  http://humblebola.com/the-rewind-a-bright-future-ahead-or-a-trojan-horse/ 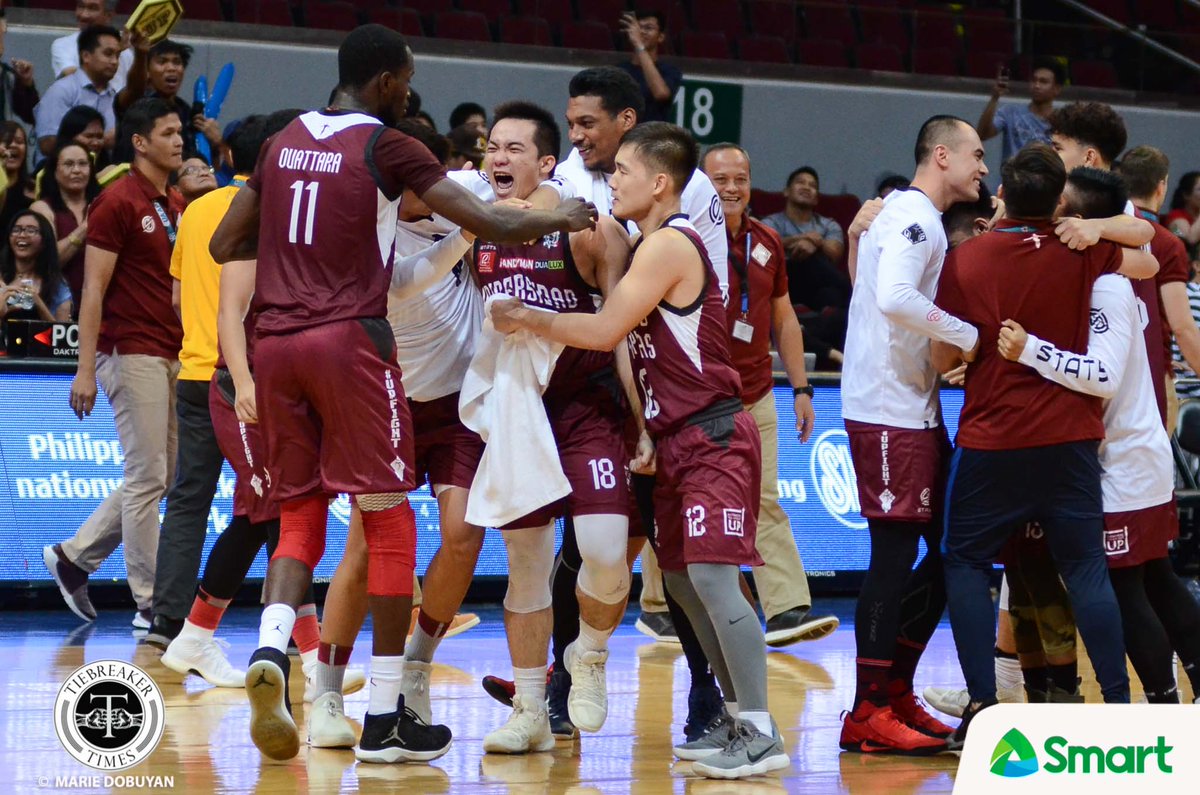 Looking at UP’s line-up, one can argue that they have one of the best starting five’s in the league coming into S81.

That’s why it’s very critical that guys off the bench produce quality minutes for the team. But good news for them, Coach Bo has a solid 2nd an 3rd unit that can maintain or even change the momentum in favor of the Maroons – The likes of Dario (I really wish he goes bonkers this year), Tungcab, Murrell, Jaboneta, and Gozum could very well provide that spark off the bench.

If all things go according to plan, UP will finally see the (Bright) light at the end of the tunnel. After years of searching, I guess this will be the year that UP will finally achieve their goal and take a spot in the Final Four.

My bold prediction would be a 9-5 season (at the very least) good for 3rd place in the standings and they should face FEU (2nd) in the semi-finals. They would be able to will their way to a Finals appearance against the tournament favorites, the Ateneo Blue Eagles. Although a tough task, I believe (gut feel) they can beat FEU; Dennison is gone, they now have a counter for Orizu, and a 1-1 split last year means UP can beat FEU.

However, the Blue Eagles (especially Coach Tab Baldwin) would be too much too handle for the Fighting Maroons (for the time being) as they would eventually lose via a sweep.

It won’t hurt that much for them as UP knows they’ve got one more shot at the crown in S82 with their big guns ready to roll, Ricci Rivero and Kobe Paras. No way to go but UP right?