Welcome to the Preseason edition of the MVP Race!

This will be a generally straightforward column that aims to rank Humblebola’s projected MVP candidates as the season moves forward. This edition is a Preseason list, which is based off what happened last season, and whatever games were held during the course of the offseason.

Before we start, some things to consider as we rank the players:

1. We will follow the UAAP format of having just one foreign student-athlete (FSA) within the Mythical 5. Case in point: The last two seasons have featured Papi Sarr in the Top 5 of the MVP Race, but he was excluded in the Mythical 5 since Ben Mbala had a higher statistical point output than him. This isn’t meant to discriminate: we just want to be uniform with the way we handle these rankings. So it’s a simple idea: Only 1 FSA within the Top 5.

2. We won’t be following any formula for this MVP Race (Just like how it is with the NBA!), but take note of this frame of thought this column will aim to follow over the season:

Individual stats are given due consideration since over the past years, the MVP has been decided largely by the stats of a player. 1/4 of the computation is allotted to actual impact on the court. These are the “little things” such as how one moves within the system, his activity on the defensive end, so on so forth. Intangibles, in one word, #PUSO. Team record should be self-explanatory.

We won’t be doing any concrete computations using this frame of thought. It’s just something to keep in mind when it comes to how the rankings are done.

3. This is a MOST VALUABLE list, not a BEST PLAYER list. Those are two completely different topics altogether.

With that, here is your Preseason MVP Race as we inch closer to the UAAP season.

The UE Red Warriors finished with the second-worst record last year, yet Alvin Pasaol still found a way to sneak his way into the Mythical Five. That in itself should be enough reason for us to consider him a candidate in the MVP Race.

More than just past history, however, is how Pasaol has improved over the course of the offseason. The most important thing he’s done is having lost weight so he can further better his game. It’s shown into actual production, as he scored 30+ points in multiple games in the Ballaholic tournament the Red Warriors joined during the offseason, and he’s been moving so much better on the court. The fewer fats are moving, the more efficient Pasaol has been.

Lost in his ability to score are the little things he brings to his team. As early as last year, he was already one of the most vocal players on the Red Warriors roster. But what is truly infectious with Pasaol is his positive attitude. His team can be down by as much as 20, but he will continue to fight and scratch his way to a victory. That kind of positivity matters, especially with a team like UE that’s starting anew.

A large part of Tolentino’s inclusion here is the potential of the FEU Tamaraws to finish within the Top 2, but in reality, he could potentially rank even higher in this race. The primary reason for that: untapped potential.

Tolentino has been potential personified ever since he came into the UAAP. With the Ateneo Blue Eagles, he showcased flashes of this, most notably versus the NU Bulldogs in Round 1 of Season 77, and versus the UST Growling Tigers in Round 2 of Season 78. But that’s all that they were: flashes. To do so in a consistent basis was close to impossible with Arvin, which resulted in frustration for plenty of fans.

But last season in Season 80, Arvin turned these flashes into longer previews. Over the year, his playing time increased, and it led to production for the Tamaraws. With his last year on the horizon, he’s finally adjusted in playing within the system of Coach Olsen Racela. It wouldn’t surprise any of us if he finally plays with more deadly consistency. If he’s finally able to completely grasp this? Winning the MVP shouldn’t be that ridiculous of a goal for the man who’s Born to Score. 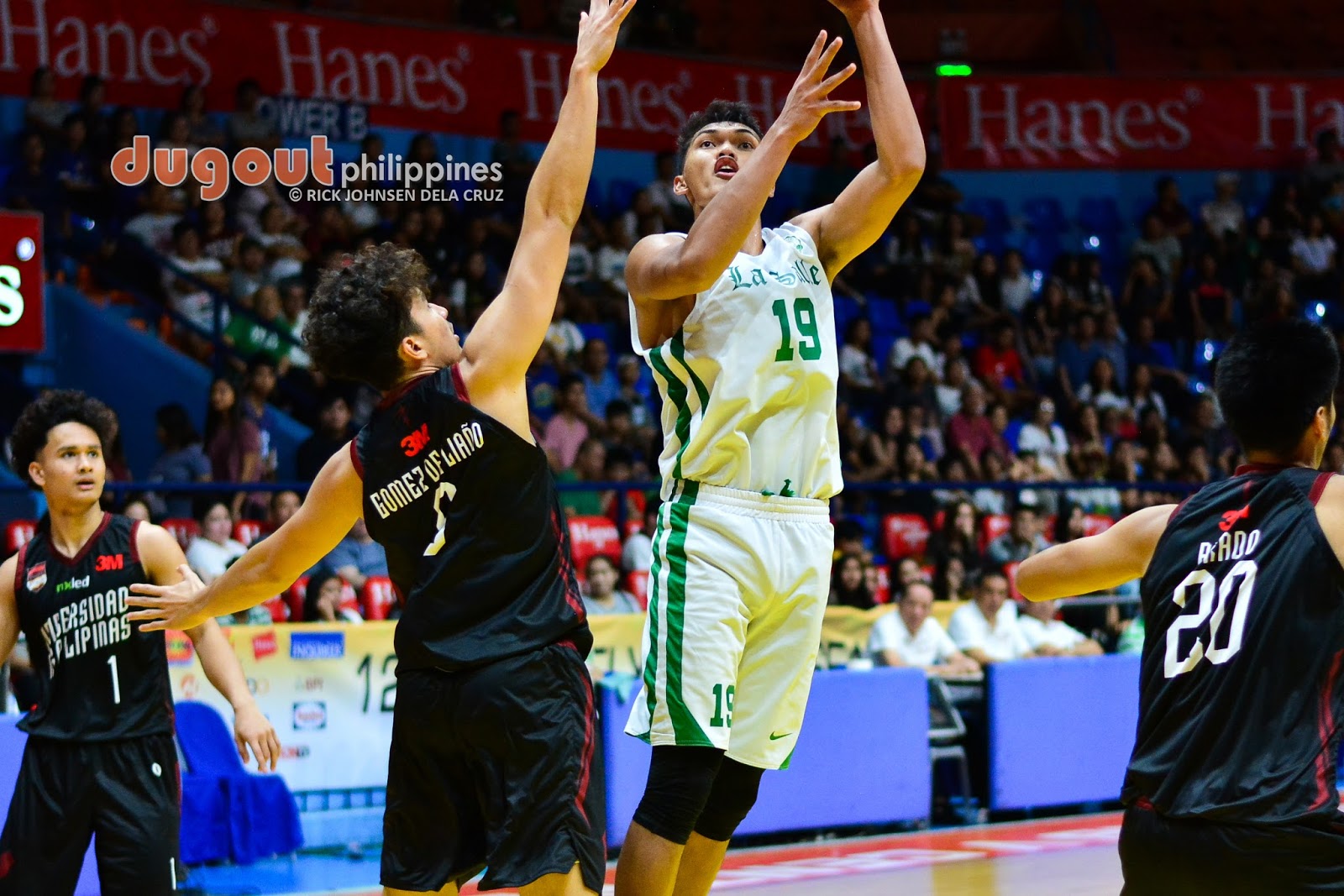 The De La Salle Green Archers were projected by many to be doomed after the massive exodus that occurred after the end of Season 80. Not only did they lose their champion coach in Aldin Ayo, but they also lost two franchise cornerstones in Ben Mbala and Ricci Rivero. It wasn’t looking pretty, but by the end of the preseason, things looked to be a lot brighter than projected.

A big part of that was the breakout of big man Justine Baltazar, who from a seldom-used bench player has evolved into a legitimate big man option. It wasn’t like Baltazar magically gained a ton of muscle and learned how to dunk over players. He’s still the same, lanky force who came out of the NU Bullpups three years ago, but this time, with a far more polished game.

His game is basic and fundamental, but you can’t deny how effective he is. Baltazar is a surefire nightly double-double threat, and mix in his shotblocking ability, you have someone who will surely garner MVP attention. La Salle isn’t screwed, doomed, or whatever adjsective you’d want to use. These kids will be alright, and a big part of that will be Justine Baltazar. Since these two players are teammates, and the order in which they are ranked will likely be discussed to the brim, I’ll place these two into one section instead. At the same time, we’ll be dividing this into the frame of thought we established at the start of this piece.

Team record will obviously no longer be considered in this direct comparison, since Ravena and Kouame play on the same team. Ateneo is projected by many to have the best record by the end of the elimination round, so that was a huge boost when they were compared to other players.

In terms of intangibles, this is where Ravena takes the cake. Kouame has shown to have an elite motor as well as energy, but the leadership and maturity that Ravena brings to the table is something else. As imposing of a physical force that Thirdy is, even more impressive with his development over the course of his career has been his intellect for the game. This is where Ravena’s experience comes into play.

When talking about impact on the court, it’s a tricky rope to go through. On one hand, both players play different positions. Kouame’s a center, while Ravena’s a forward who moonlights as a guard in spurts. The beauty with Ravena is his sheer versatility. His strength allows him to play with the giants down low, while his quickness and skill gives him leeway to play in the perimeter. With Kouame, he largely plays on one side of the court (inside), but his impact there is tremendous. He’s Ateneo’s primary shotblocker, and is their best rebounder on the team.

Thirdy may cover more ground, but in terms of overall impact, Kouame slightly takes the cake. There’s plenty of other wings to help out Thirdy, while Kouame is THE guy for Ateneo down low.

Finally, individual stats. This is a little bit more concrete, so let’s break it down bit by bit. In terms of points, Thirdy will likely score more. He showed over the course of the preseason that he’s Ateneo’s best scorer, now possessing of a jumpshot from midrange. That changes things. With rebounding, as dominant as Thirdy is, Kouame is a completely different animal. In distributing the ball, Kouame has shown some promise, but Thirdy’s evolution into someone who can create off the dribble just changes things. On the defensive end of the floor, steals are neck and neck with a slight edge to Thirdy, while Kouame takes a commanding lead in terms of blocked shots per game.

So who takes the cake? I had to give it to Kouame who had a very small lead to Thirdy. It came down to the edge Kouame had in terms of rebounding and blocked shots with individual stats, while his key role as a big man cannot be ignored.

But really, if you’re Ateneo, this is such a first world problem. Both of these guys are on the same team. We currently hail them as the top two players for this MVP Race. Once again, both of these players are Blue Eagles. A terrifying sight to behold for the rest of the league.