UAAP Season 78 MVP Watch: There Is A Race

The MVP race last year was pretty much the “feature every week which rubbed in people’s faces that Ateneo has Kiefer Ravena and other schools don’t” Let’s face it. The Phenom owned it last year. Wait, there was an MVP race? If you ask me, there was none. There was only a Second Place to The Phenom race. That’s how good Kiefer’s season was last year. So good that there was pretty much no race at all.

However, this season, there is a race, and it’s a very tight one at that.

Last year, the primary contenders for the MVP title were Ravena, Jeron Teng and Mac Belo. Let’s say that there was indeed a race for the MVP award last year. Given that, then yes, those three were the frontrunners. Sure, Karim Abdul was there and Chris Newsome had his moments, but if anything, Kiefer, Jeron and Mac were the only legitimate contenders for the award. The same can’t be said this season.

Of course, Kiefer, Jeron and Mac are still in the thick of the race. But unlike before, they’re not the only legitimate contenders. Add into the mix Kevin Ferrer and Ed Daquioag. Alfred Aroga makes quite an interesting case. Of course, you can’t forget about Mike Tolomia who has been very important when it has come to the success of the FEU Tamaraws. Edison Batiller also made a case for the MVP award early during the season. Papi Sarr has kept the Adamson Falcons competitive to some extent. And the list goes on.

So, yes, there indeed is a race. Who are those who are in for this week’s MVP Watch?

He deserves it. ‘Nuff said.

Just when the UST Growling Tigers were seemingly headed to their second loss in eight games, Kevin Ferrer came in and saved his team from losing. Ferrer struggled during the first three quarters of their game against La Salle. The jumpers which he would usually make were missing, plus he was having trouble handling the heft and power of Teng, Prince Rivero and Jason Perkins. In the fourth quarter, however, KFer showed them who’s the king. He scored 11 of his 15 points in that quarter alone, scoring off a variety of jumpers and from free throw makes. It was a masterful performance from the graduating Tiger. He got the win. He performed well. No doubt about it, Kevin deserves the top spot in this week’s MVP Watch. 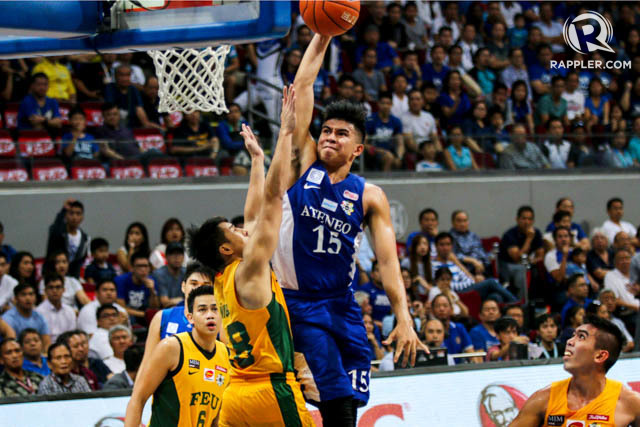 You’ll have to soar even higher if you want the top spot back Kief. // Rappler.com

It’s been a frustrating season for Kiefer Ravena. For a guy who can easily produce 20-5-5 on any given night, his current stat line is pretty frustrating. But… hey, 17-6-4-1 isn’t that shabby right? Not at all. No one in the league has a stat line that matches that. This week surely didn’t help lift Kiefer’s averages. In their game against the FEU Tamaraws, Kief played off ball during the early going, thus limiting his production. He only got his time to produce during the fourth quarter, where he pretty much lifted his team from a blowout. I would’ve placed him at #2 and not #2a, but the thing is, you also have to win. His win shares are bad compared to the guy he’s tied with. Speaking of which… 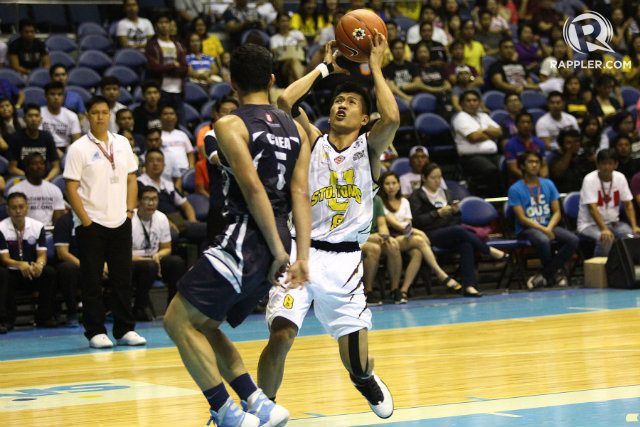 Daquioag has been the Russell Westbrook to Ferrer’s Kevin Durant. They’re both alpha dogs, and they’re both really really good at basketball. But, just like the Oklahoma City Thunder duo, one is often better than the other. For this case, Ferrer is better than Ed. But that does not take away anything with what he has done this year. What he has done thus far has been amazing to say the least. For this week, he was the one who carried the scoring cudgels when KFer was off against La Salle. The way he did it was pretty silent, if you think about it. But as always, the point is that he got the work done. If it weren’t for his 1.6 WS stat and his performance against La Salle, he would be #3 instead of #2b for the rankings. But hey, he managed to pull it all off right?

Jeron has been one of the few steady players in the league. Plus he’s been elite. Dang.

Undoubtedly, Jeron is the leader of this young La Salle squad. This past week saw them lose against the UST Growling Tigers, then bounce back against the scrappy UE Red Warriors. In those games, La Salle remained consistent with its system. Everyone got to contribute but despite that, Jeron was still the center of their offense. It’s been like that with the King Archer. Consistency. Crazy consistency. He’s been so consistent this year that it’s starting to really creep me out. It will be even more interesting to see if he can elevate his level of play to even greater heights, not only for his case for MVP, but also for his team.

The FEU Tamaraws have been so good and so balanced when it has come to their contributions, Mac Belo hasn’t been able to put up his typical dominant numbers. You know what, that’s fine. He doesn’t have to be his usual dominant self. The production can come from many places when it comes to the Tamaraws that Mac can just pretty much relax. The Tamaraws were able to win both of their games this week, and he was able to put up respectable numbers for both their games. The FEU Tamaraws have been winning, and Mac Belo is a huge reason for that. He definitely deserves to be part of the top five for the MVP Watch.