The tides of the UAAP are turning. The mighty have fallen and new teams have risen to the top. The race to the final four is nearing its conclusion while some teams have already dropped out.

A blow out, another double-overtime, more suspensions and a post-game scuffle, need there be any more reason to follow the UAAP?

Let’s see how our Power Rankings stack up:

After ten games the State U cagers have yet to make it to the win column. Despite the change in coaching staff, there seems to be little change to the winning ways of UP. Even if the Falcons were a feather short, they couldn’t take advantage of it as their own scorers were shut down, leaving Soyud to try and keep them alive from the line.

They finally snap their losing streak but it may have come a bit too late. Their only hope right now is a 6th place finish if they can win against both FEU and UE in their coming games. There might be some good to come out of the win, however, as they learned to do it without their main gunner Jericho Cruz.

Suspension plagued, the Warriors are limping toward the final stretch of eliminations. With Mammie and Casajeros tagged with two game suspensions each, Olivares joins the list for another two games. Roi Sumang might be a great player, but even great players need their teammates to win it. The Warriors will have to rely on sheer determination to fuel their play as they try to make a bid for the Final Four.

Win one, lose one. In less than two weeks, the Tamaraws are involved in yet another double-overtime game. As they are dethroned from the number one spot in the standings, it seems their first round sweep has caught too much attention and teams have figured out how to beat them. If they can make it into the Final Four in one piece, the Tamaraws will still be a force to be feared as they have played the most game minutes of any team so far with all the overtime games they’ve had this season.

Has the league figured the Tamaraws out? (Photo Credit: Jun Mendoza, Phil Star)

Bucking a slow season start, the defending champions are right back into the running with a six game winning streak. Ravena’s recovery has done wonders for his team, but his free throw shooting has started taking a plunge. Their loss to La Salle means the weight of their remaining games become heavier as pressure mounts on the race to the Final Four.

Wounded but not dead. The Growling Tigers are keeping their season alive despite the numerous injuries the team has received this season. After grinding out a win against a struggling Falcons, the Tigers pull off an epic double-overtime upset against the FEU Tamaraws by hitting two crucial three pointers to force both extra periods. Captain Jeric Teng is has suited up for his team but has not been able to play yet due to his recent hamstring injury.

Wins all around for the Tigers, both for players and fans! :) (Photo Credit: Czeasar Dancel, NPPA Images)

TengInNa! The Archers continue to ride their winning streak as they inch out a win against their rival Ateneo. Head coach Juno Sauler’s level-headedness stood out that game as the opposing coach lost his cool at the other end, giving up an unsportsmanlike foul, allowing La Salle to sink in two free throws and gain the possession. He also had the confidence in his players to draw up a final play that had a then struggling Jeron Teng take the ball on the isolation only to hit the game winner.

After giving the mighty Tams a taste of defeat, the Bulldogs now assume the throne on top of the league standings. With Bobby Ray Parks no longer the focal point of their offense and players like Roño able to step up, the Bulldogs are starting to match expectations. They continue to be deadly from inside and out as Mbe dominates the post all while shooters line up from outside, swinging the ball to find the open man until BANG! 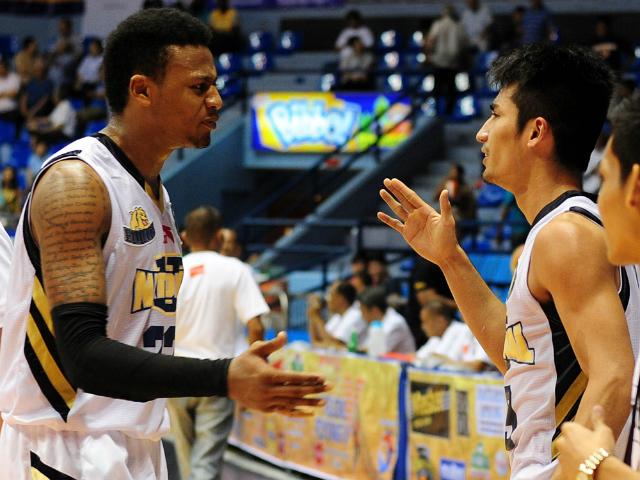 These two have been making sweet music together lately. (Photo Credit: gmanews.tv)