UAAP Season 81 Preview: Can the UST Growling Tigers be golden once again?

TEAM RECORD LAST SEASON: 1-13, last place, did not qualify for the Final Four

Losing Jordan Sta. Ana is a big blow to the Growling Tigers as they approach Season 81’s opening day. He was one of the consistent sources of points for a God-awful UST team that played rudderless throughout Season 80. Not that we’re being mean here, but it seemed like the entire squad was in shambles and directionless. Sta. Ana would’ve fit perfectly in Aldin Ayo’s guard-oriented offensive attack, for he likes his guards to have that scoring ability and Sta. Ana is not short on those. Basibas on the other hand, is a big body that they utilized as a tweener in the sense that he can play both forward spots ably. To be fair to the man, he shot 42.5% from the floor to provide some blip but in the end, he can only do so much as make a terribly genius decision of getting in the way of an airborne Thirdy Ravena (we’re not going to let that rest, I’m terribly sorry). Thomasians can probably smile quite a bit with the return of two familiar faces. Embons Bonleon is a legit baller that just needs proper attention, and probably to an extent, discipline. He was highly touted coming out of high school for being one of the few big bodies that can handle both forward duties and have that scorer’s mentality. Sadly, it hasn’t panned out in the seniors but all that is probably set to change under UST’s new leadership. For Renzo Subido, it was quite puzzling that he decided to sit out last year when it could’ve been an opportunity to show fans what made him such a sought-after recruit in high school. It’s already his fourth year and he has yet to play elite consistently. He had a lackluster rookie year, could not get going during his sophomore run. His third go-round had some semblance of promise but that’s about it.

Amidst the pressure of time that Subido and Bonleon face, there are bright spots that look to stay in UST for quite some time. For a school to keep its homegrown UAAP Juniors MVP in CJ Cansino, that’s already a successful offseason. Cansino offers versatility at the forward spots and should see his game translate under his new coach, and that in itself can give any fan positivity for the coming hardcourt wars. However, the biggest addition to the Growling Tigers this year is the arrival of Aldin Ayo, NCAA and UAAP champion coach. If there’s anyone who can turn a team of seeming misfits, it’s the man who towed a ragtag undersized Letran squad to a title against NCAA perennial powerhouse San Beda. 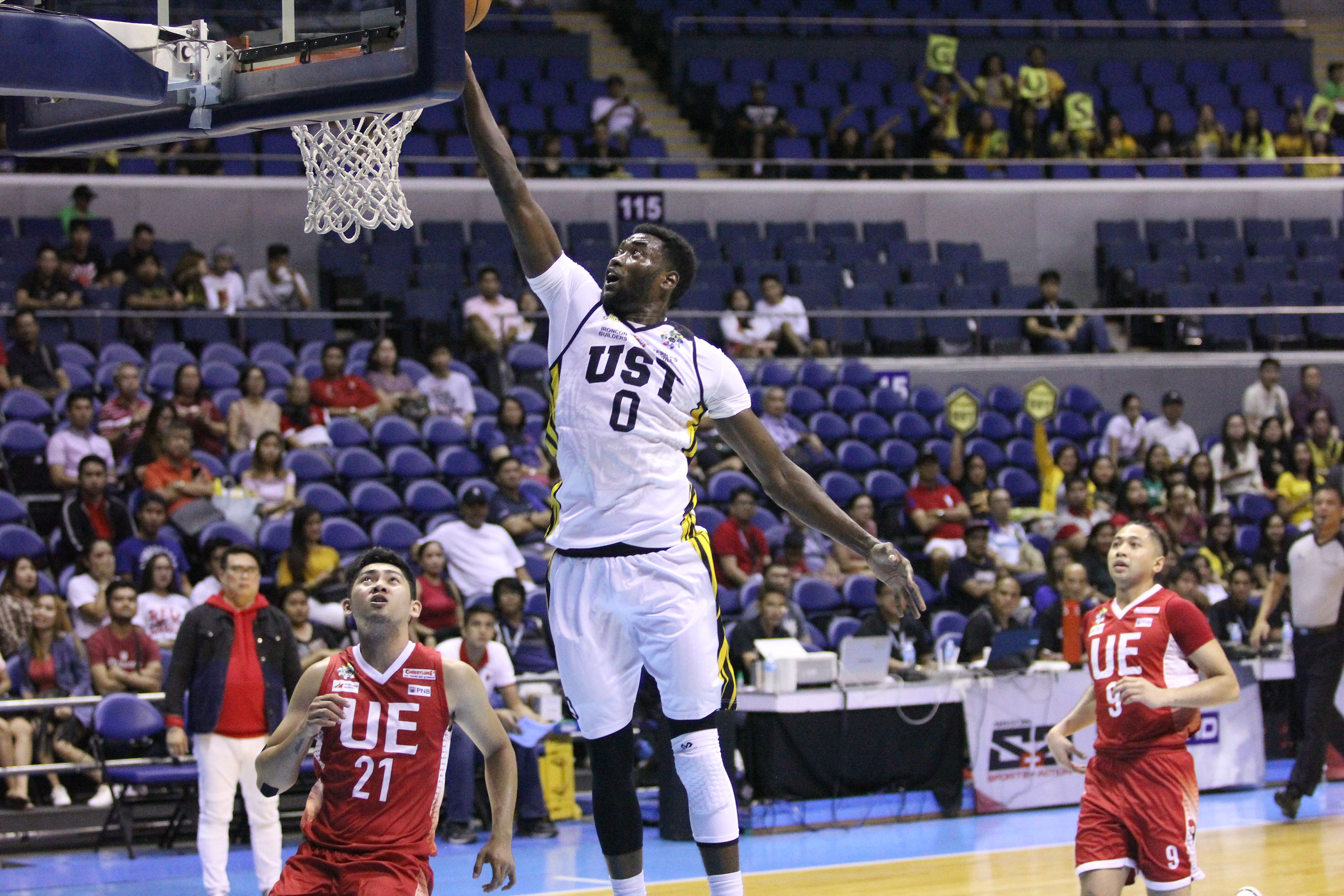 Basibas and Sta. Ana may have left, but Akomo is still there and UST needs him more than ever in his last tour of duty, unless he goes Karim Abdul (Hey, that man was playing since 1611! I kid). Akomo will play a large part in Ayo’s schemes especially in pick and rolls where the big has shown quite the aptitude in diving for easy inside buckets (50% from the floor all tournament). With attention going to be focused on the returnees and the rookie, Akomo may as well be feasting on open looks. Aside from that, he’ll be doing quarterback on D as the team’s main rim protector (and practically, the only choice as the Tigers totally lack the size to match with other teams). Will he surpass his Season 80 averages or will Akomo find another gear under Ayo?

The team was the worst in the league at taking care of their possessions. Throwing the ball 24 times a game will definitely not get you a win. Let’s say your opponents score at least two points every time you turn it over, especially on fast breaks, and that’s already 48 on the board against you. Winning teams take care of the basketball as if their lives depended on it. If UST wants to go back to their golden days, they needed to start with one simple thing: TAKING CARE OF THE BASKETBALL.

KEY QUESTION: How will Aldin Ayo turn this thing around? Aldin Ayo is a brilliant young coach who clearly knows what he’s doing. His Letran team displayed that coaching acumen in adapting to the tools he had at hand. He lacked size? He turned to a three-headed monster of Mark Cruz, Kevin Racal, and Rey Nambatac with a sprinkling of Bong Quinto. He lacked the bigs to dominate in the paint so everyone had to chip in on defense and it resulted in a hyperkinetic switching scheme that negated corner turns and forced the ball handler to give up the ball. Suck it with the Mayhem, that’s just a cute thing, oversimplifying the complexity of his defensive philosophy.

When he was given big guns at La Salle, it clearly showed that Ayo loves and appreciates players who knew their role and stuck to the plan. While Ben Mbala dominated individually, it was as if Ayo knew that it was be teamwork that was going to make the dream work. It’s refreshing that Ayo is given a team that is practically littered with rough gems because this is the same challenge he faced at Letran. The Growling Tigers sure are top-heavy, but for me, Ayo’s magic touch remains with the role players and how he will utilize them. Lee is touted as the King Tiger by many. Take that away and he’s just Clark Bautista 2.0. No other shot than the three, and he’s someone offenses attack to the brim. I’d like Ayo to utilize Lee as a bench guy since he clearly has shown that he will be better in that role as opposed to starting and getting straight up abused by the UAAP’s cadre of quality starting shooting guards. Put him in the second unit so he can jack up all the shots he wants, whether on the court or off it, as long as the other four alongside him can cover his defensive inadequacies.

This is quite huge especially for a young team that is parading a new coach. But it’s Papa Guns. You don’t mess with Papa Guns and say you won’t follow him. Subido, Embons, Akomo, and Cansino will not exactly be giving Ateneo-level scares but at least they’ll be a decent core to work with for Ayo and his staff.

More than anything, I think it’s the chase for the respectability they lost last year that will serve as the fuel to a resurgence.

It’ll be fun to see Akomo feasting on the defensive switches Ayo will commandeer his team to while squeezing all that he can out of Subido and Embons offensively. It’ll be trying against the top tier teams like defending champs Ateneo, La Salle, and FEU. They can go toe-to-toe against UP and probably challenge Adamson in some games, but they won’t make the Final Four for the meantime. But that shouldn’t be the goal for this season. Coach Aldin said it best, “Hindi kami nag-iisip ng resulta.” The results won’t show up now, but it will sooner or later. Step by step.