Hungover Champions: Analyzing the woes of the San Miguel Beermen

“Why do people drink beer?”

It’s such an innocent question that would make adults laugh, yet, it’s a question that baffles kids. Well, for the kids out there reading this article, I have one answer to this question of yours.

In the commercial above, they drank beer to celebrate various, mundane, events. But more often, people drink beers to celebrate the big events: graduations, promotions or because someone finally got out of the hell called the friend zone.

For the San Miguel Beermen, they drank beer because they won a championship that has long been overdue for the legendary franchise.

The team faced so much controversy and drama the past few seasons mostly because of the expectations fans placed on the star-studded cast they have assembled through () trades and acquisitions. The cry of doubters and haters filled the ears of the flagship franchise of the San Miguel Corporation because of the mediocrity they showed despite the resources which they had.

Finally, after capturing the 2014 – 2015 Philippine Cup Championship, the doubters and haters were silenced.

Everything was finally well. Controversy and drama were no more.

Or so they thought. 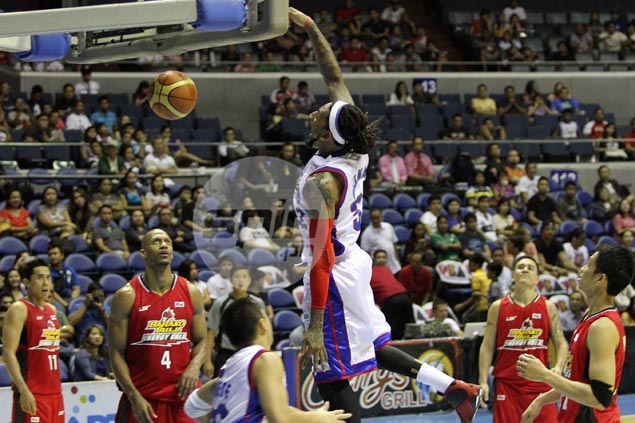 An image of what could have been for the Beermen. (Photo Credit: Spin.ph)

Here’s the thing with the San Miguel Beermen; historically, they haven’t performed well in the Commissioner’s Cup. Sure there have been times where they performed exceptionally during the eliminations. But, come the playoffs, it hasn’t been as pretty. With the league leading 19 championships which the Beermen have, only 2 have come from Commissioner’s Cup victories. Let’s see how they’ve performed these past few years;

7 2 .778 2nd Place Swept in the Quarterfinals despite a twice to beat advantage

#Clearly, the Commissioner’s Cup hasn’t been the strongest conference for the most recent Philippine Cup champions. For the past 4 iterations of this conference, they didn’t win a championship, plus they posted a winning percentage (at least based on the eliminations) of less than 50 percent.

There have been various factors as to why they didn’t perform well. For one, there were import changes which affected the chemistry of the team. The most obvious case was during the 2012 – 2013 Commissioner’s Cup. The Blaze Boosters were initially performing well with NBA veteran Renaldo Balkman. Sadly,  Petron had to replace him because.. well.. you know the rest.

Entering the 2015 Commissioner’s Cup, expectations were sky high for the Beermen. After all, they just proved that their star studded cast could indeed win a championship. Add to that the dominance of reigning MVP and Philippine Cup Best Player of the Conference Junemar Fajardo, the new found confidence of Arwind Santos and the amazing coaching of Leo Austria, the dream of back-to-back seemed clear as water for the Beermen.

Question was, would that dream turn into reality?

Junemar Fajardo likened the taste of winning his first PBA championship to that of beer. Lots of people like the taste of beer, and more often than not, people often drink too much of this.

Drinking too much beer often leads to hangovers.

“Good morning,” PJ Ramos and the Kia Carnival must have shouted to the hungover Beermen. The recently crowned champions let out a groan, not wanting to rise from their slumber. What was about to commence, well, it wasn’t pretty.

The San Miguel Beermen were TRASHED in their first game back from the Philippine Cup. Kia controlled the game with an effective defensive game plan, and by taking advantage of the poor defense that the Beermen showed. In that game, Arwind Santos shot POORLY from the field (0 of 10 from the three, 7 of 23 overall), while Ronald Roberts proved to be a bad fit with him hogging the inside despite the presence of Junemar Fajardo.

Most people thought that game was simply a rude awakening. It was only a matter of the time before the team recovers from some championship hangover. Having tired legs after enduring a TIRING (to say the least) 7-game series against the vaunted Alaska Aces defense, plus their lack of chemistry with their import given that they only had a couple of days of practice with him didn’t help but it was a valid excuse.

Now may I ask, where the hell is that aspirin?

Diving into the Numbers

Before we go into the Commissioner’s Cup statistics, let’s take a look at the Four Factors of the Beermen during the 2014 – 2015 Philippine Cup.

Last conference, the Beermen had the best Net Rating in the league. They had the second best ORTG, plus the best DRTG along with Alaska. Stats don’t lie. SMB was indeed the best team in the Philippine Cup.

The same can’t be said for the Commissioner’s Cup, however;

The ORTG and the DRTG of the Beermen are bad, but they aren’t so bad that your eyes will burn once you see them. What’s alarming, however, is their eFG%. They’re ranked dead last in the league when it came to their eFG%, and that isn’t even the worst part.

The Beermen average 87.3 Field Goal Attempts per game. That’s 4.7 attempts more than the second placers in that department, Talk ‘N Text, who also happen to be the top team in the PBA as of this writing.

56 percent of their field goal attempts have come from mid range or from rainbow country. It would have helped if the team was shooting exceptionally from those areas, but the thing is, they aren’t. In fact, they’re shooting horribly from those areas, posting a number of 14 percent. They’re taking horrible shots, plus, they aren’t making them. I could easily say that these guys are hungover like hell. But, why else could this be?

1. Relying too much on the import

Naturally, imports tend to shoulder most of the workload of a team’s offense. However, considering the amount of talent that the Beermen have, they don’t need their import to hog all the possessions. Sadly, the Beermen have followed the norm, looking like a hungover team who needs help from their friend(s).

In the 4 games that Arizona Reid has played, he has posted a USG% of 34.4 percent, good for 6th in the league. It’s a statistic that isn’t as bad considering that Denzel Bowles has a USG% of 40.1%. But, considering the depth that SMB has, plus having two MVP caliber players in Junemar Fajardo and Arwind Santos? I don’t think Reid has to attempt that much shots every time he’s on the floor. Speaking of Arwind…

People went CRAZY over Arwind Santos after his rebirth during the Philippine Cup Finals. He became the 3&D guy everyone envisioned him to be. He was efficient as well, making most of his shots despite only having a USG% of 21.7 (since SMB does have that Fajardo guy). The same can’t be said for his performance this Commissioner’s Cup, however.

Junemar is the MVP for a reason. It’s not just because he’s 6’10”. It’s not just because he’s in a team backed up the the San Miguel Corporation. There are so much reasons as to why he’s considered as the Most VALUABLE Player. For one, he gives defenses fits with his ability to create his own baskets through various post moves, mid range jumpers, and that vaunted #KrakenStep of his. Second, he’s able to create baskets for his teammates by attracting double teams and passing it out for the open three.

I don’t think the team realizes that he is indeed the MVP.

Junemar has been under utilized this conference. Definitely, the fatigue factor is starting to set in. He’s been playing non stop after all, enduring stints with Gilas Pilipinas in FIBA Asia, the FIBA World Cup and the Asian Games, plus the grind of going through the PBA.

However, we can’t deny that the man has been under utilized. He has a USG% of 19.4 percent. That’s good (or bad?) for 5th in the team, and that’s a number lower than that of the league average.  Despite the lack of touches, Junemar has been pretty effective for the team, especially considering how the other Beermen have been performing. He’s top in the team when it comes to Win Shares, plus his eFG% is good for second in the team. Junemar is tired, yes, but we can’t deny that he’s still of utmost importance when it comes to the success of the team.

Most Beermen fans in Twitter have been clamoring for their team to simply shut it down this conference considering how much they went through during the Philippine Cup. Part of me says yes to this, while part of me says no.

A part of me says no because, well, I respect the game too much. I’m sure the Beermen respect the game too much. Tanking is considered as a show of disrespect for the game of basketball. You’re supposed to play your best, night in and night out no matter what happens. However, a part of me says yes well, it is the most logical thing to do. This team is tired. I’m pretty sure if the PBA had those SportVU cameras which the NBA has, it would show that SMB has ran the most miles along with Alaska (just remember the press which they implemented, my goodness).

So, where should the Beermen go from here? How do they plan to cure this hangover that they’ve been experiencing? 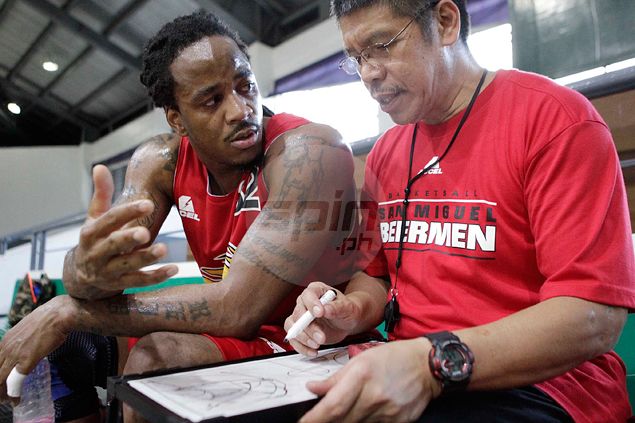 Arizona Reid will have more time to gel with Coach Leo and the Beermen just in time for the Governors’ Cup. (Photo Credit: Spin.ph)

Maybe come the Governors’ Cup, this hangover that SMB is experiencing will no longer be there. Maybe the coaches are just there, formulating the cure for the Beermen while people continue to doubt them.

They’ll be back to how they were; dominant, focused and effective. In the end, opponents will shiver and simply,