Let’s start this Stat Session off by revisiting the recently concluded Philippine Cup.

Before we go into our coverage of the Commissioner’s Cup, we thought of sharing with you guys some interesting statistics we saw from the elimination round games of the Philippine Cup. This post does not go too deep into the stats, but we hope you guys enjoy it nevertheless.

*Note that the stats used below are from the elimination round games only and have been filtered to reflect only players that played at least eight games and averaged 24 minutes.

Sorting through the stats, I found a very surprising name atop the Effective Field Goal (eFG%) and True Shooting (TS%) percentage table. Despite only averaging eight points per game in the elimination round, Mac Baracael shot an impressive 61.2% eFG% and 62.1% TS%, good for top and 2nd overall in the league respectively.

Clearly, the addition of Greg Slaughter and Ginebra’s pick and roll heavy offense benefited Baracael greatly. With defenses sucked into the paint and / or chasing Tenorio around screens, Baracael spent a lot of time spotting up and shooting jumpers with barely any resistance around him.

Baracael did a lot of this in the Philippine Cup. (Photo Credit: Paul Ryan Tan, AKTV)

Let’s look at his numbers:

Wait, how come Baracael’s offensive rating (ORTG) slipped all the way to 11th if his eFG% and TS% were in the top two? Well, to answer that, we have to remember that ORTG is defined as points produced per 100 possessions. And by “points” here, are not limited to the points that the particular player scores. Other things like assists, offensive rebounds and freethrows are factored into ORTG. With that, let’s take a look at Mac’s assist rate (AST%) and offensive rebounding rate (ORB%).

Baracael’s pedestrian ORB% and AST% is what brought his ORTG “down” to 11th. Let’s be clear though, to finish just outside of the top 10 in ORTG without being one of the main fulcrums of a team’s offense is a pretty amazing feat in itself and it points to both Baracael’s scoring prowess and the efficiency of the Barangay’s offense, which topped the league with an 47.4 eFG% and was a tick below TNT with a team ORTG of 100. With the high scoring Leon Rodgers reinforcing Ginebra in the Commissioner’s Cup, expect Baracael to possibly find himself even more open, with the question now being whether he even gets an opportunity to touch the ball.

Mark Barroca may lead the league in total thefts (37) and thefts per game (2.6), but when it comes to STL% (an estimate of the percentage of opponent possessions that end with a steal by the player while he was on the floor), the duo of Chris Ross and Chico Lanete top the table with 4.9% and 4.7% respectively of opponents possessions ending with the ball in their hands.

Ross and Lanete: “5% of your balls belong to us”

One would not be surprised to find Ross on the list, as he is arguably one of the best defensive guards in the PBA. But Lanete? He hasn’t averaged a steal per game since the 2010-2011 season, so how in the world did he end up almost matching Ross’ STL%? There could be a couple of hypothesis to answer this, but the most probable explanation would have to be the effect of San Miguel’s shot-blocking duo of June Mar Fajardo and Arwind Santos. With a combined four blocks per game between Fajardo and Santos, Lanete knew that they could pressure the ball and gamble more on defense, because any player that got passed him on the perimeter had to deal with Fajardo’s size and Santos’ length.

Did it work though? The team did lead the league in defensive rating (DRTG) with a 92.3 mark, but as we all witnessed, they just faced a streaking Rain or Shine team that was just too physical for them to handle.

After years of languishing in the San Miguel bench, Joseph Yeo’s PBA career was given a 2nd chance when he was reunited with his college coach Franz Pumaren in Air 21. Despite the wealth of talent that the team had in Yeo, Cardona, Canaleta (at that time) and Taulava, the Express did not have a point guard capable of running the team effectively (sorry Atkins fans), often choosing to run sets out of the post with Taulava as the distributor.

Enter Joseph Yeo, who’s career high in assist averages came during the 2011-2012 season wherein he normed 3.4 helpers a game over 26 minutes of play for the Boosters. With Coach Franz coming to grips late in the conference that his team needed a more “traditional” point guard as opposed to a point center, he gave the keys to the offense to Yeo, who responded by averaging 9.2 assists over their last five games as compared to only 4.7 in their initial nine outings. 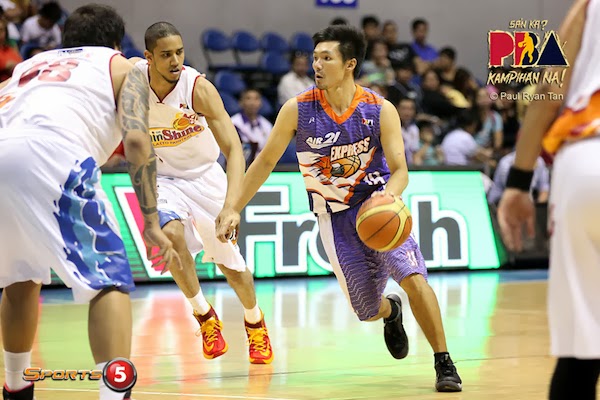 Joseph Yeo showed us that he is way more than a scorer. (Photo Credit: Paul Ryan Tan, AKTV)

This late outburst bumped Yeo’s assist average for the conference up to a career-best 6.4 per game, proving to the league that he is truly more than a one dimensional scorer. Sadly though, it looks like this trend probably won’t continue since the Express have brought it point guards Jonas Villanueva and Eluid Poligrates into the fold. But, if Coach Franz could somehow quickly put together an offense that still allows Yeo to facilitate along with the experienced Villanueva and explosive Poligrates, then we could be looking at an Air 21 team that could surprise this conference.

There you have it, we hope you guys enjoyed this quick-hitter of a post. Let us know what you think about this and other posts through our shiny new comment box below! :)