Credits to Isyan Sandoval (@isyansandoval) for the witty article name.

The Beermen are back.

Back in Boracay, that is.

When people go to Boracay, the things that they often do are, well, pretty wild. They drink, party hard, get hungover, sleep, wake up and drink again until it comes to a point where they have to stop because they’re about to go home and they have work the next day. When you think about it, the only wildest thing in that sequence of events is the sleeping.

For the case of the Beermen, they can’t do any of those wild things, because they already did it about 2 months ago, when they won the AFC Championship. After that, well, the rest is pretty much history.

Now that the Beermen are back in Boracay after 3 years of controversy and angst from the San Miguel fan base (despite being in the playoffs during that 3 year run), there is a lot of work to be done.

Do these changes have to be drastic?

Well, let’s get is started!

1. Getting LOTS of rest This is something that #Clearly plagued the San Miguel Beermen before the start of the Commissioner’s Cup.

They could barely make a shot, scoring a total of 237 points (79 points a game) for their first three games in the import-laden conference. Plus, they were quite inefficient when it came to scoring the ball, as they registered a True Shooting Percentage of 40.6, which would have been good (or bad?) for DEAD LAST in the league right now.

They couldn’t defend for their life either, posting a DRTG of 102.5 for their first four games, a far cry from their defense during the Philippine Cup, which led the league allowing just 90.4 points per 100 possessions.  Their Net Rating of -9.1 for those four games would be second to the last in the league right now, with only the Blackwater Elite trailing them.

In short, the Beermen were really bad to start the conference, no thanks to the amount of injuries, the lack of rest and the lack of time they got to establish chemistry with their import.

The Beermen don’t have to worry too much about the latter concern, since they have had Arizona Reid for quite some time. Now, what the Philippine Cup Champions have to do is to rest up, just in time for their revenge tour during the Governors’ Cup.

2. Looking for a good Asian Import

Before we look at prospective imports, what exactly do the Beermen need? Well..

Obviously, getting a back up big for June Mar would be impossible at this point, since there is a height limit for SMB (by virtue of winning the AFC title), plus, what import would like to play back up to a local?

So at this point, only needs 1 and 2 can be provided. Who among our Asian rivals can give SMB these needs?

Kamrani was Jayson Castro‘s rival for the Best PG in Asia award during the FIBA Asia tournament last August 2013. He’s a steady point guard who provides solid play making, outside shooting and defense. He’s not exactly athletic or quick, but he’s effective nonetheless.

Most probably don’t remember Kim Min Goo from South Korea, since he doesn’t exactly possess the looks of Eric Sandrin (or Lee Seung Jun.) Well, Kim Min Goo was this guy who torched Gilas Pilipinas for 27 points, on 9 of 15 shooting (5 of 11 from three). He is a proven outside shooter, plus, he’s pretty consistent in doing it.

3. Working on their shot distribution and pace

As I mentioned before, the Beermen have been particularly inefficient this conference, and one of the reasons for that is because of their poor shot distribution.

As you can see above, majority of the shots that SMB attempted this conference were from outside (56.8 percent as a matter of fact. KADIRI.) To make matters worse, among the 56.8 percent which they attempted, they only made 28.8 percent of those shots. In short, what the damn hell was SMB doing this conference?

Now, take a look at their shot distribution during the conference where they (temporarily) silenced their doubters;

Believe it or not, (in terms of percentages at least) they attempted more outside shots during the Philippine Cup. But what was the difference? They played at a better pace (in terms of their context at least) during the AFC (86.4 to be exact), thus they also averaged less attempts (which in turn, resulted to less attempts for the opposing team.) During the Commissioner’s Cup? Their pace was a whopping 93.3. That doesn’t bode well for a team whose offense circles around a 6’10” monster.

Their shot distribution during the AFC was by no means perfect, but, their pace was very apt for a team of their caliber. Other than trying to pound the ball inside more, they should also work on trying to slow the game down to a pace which is good for them. Remember, they do have June Mar Fajardo and Arwind Santos, two MVPs who can wreak havoc through half court sets.

4. Going back to basics 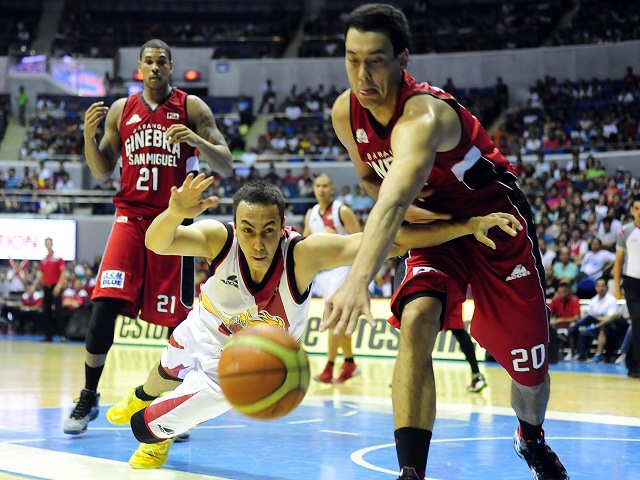 If there’s one thing that was a common criticism for the Beermen before the Philippine Cup, it was this; masyado larong mayaman ang SMB.

Coach Leo was not going to have any of that.

SMB was AMAZING during the first conference, grinding teams down and making them go through hell every time they tried to score against them.

Arwind Santos, one of the supposed main culprits for SMB’s struggles during the past seasons, transformed into the 3 & D guy most people imagined him to be, and my goodness, the work which he put up in the Philippine Cup was something else.

Sadly, for the Commissioner’s Cup, the Beermen went back to the pa-star methods that made fans doubt the capabilities of the SMC backed squad. Well #CLEARLY, those pa-star methods have no place in a team that aims for no less than a championship.

SMB’s road to a Governors’ Cup championship has started as early as now.

Fans expect no less than a championship, especially after import Arizona Reid stated following according to an article by Levi Verora Jr. of Tiebreaker Times;

I am looking forward to the third conference. I want to be stronger and work on my game. We will have more time to prepare. I am thankful for the SMB family for having me and I am blessed to be in this situation. Everybody will be fresh and ready. There will be no excuses.

Nothing else has to be said.

To the fans, get ready to cheer your hearts out once more. The Beermen will be fresh and hungry to regain lost glory.

To everyone else, well, #FearTheBeer.