This was supposed to be a conference of retribution for the Rain or Shine Elasto Painters.

After being swept by the Talk ‘N Text Tropang Texters in the Philippine Cup finals, Rain or Shine went into the Commissioner’s Cup intact and healthy, with the only addition to their roster being their 7’3 import, Bruno Sundov.

After the elimination round, the team secured the 2nd overall seed with a 9-5 record. This gave them a twice to beat advantage in their quarterfinal match-up against Ginebra. Going back to the eliminations, Rain or Shine definitely had a successful one. They didn’t look as dominant as in previous conferences, but they still managed to best eight other teams after fourteen games.

Let’s take a look at the numbers and see how Coach Yeng Guiao steered his ship this conference.

Without a doubt, Rain or Shine’s primary weapon during the Commissioner’s Cup was their offense. At the end of the elimination stage, they led the league in Pace at 94.4, which is almost 3 more possessions above the league average of 91.6. This, coupled by a league leading Effective Field Goal Percentage (eFG%) of 46.4% led to ROS being the highest scoring team (at 95.5 points per game) and also the team with the highest Offensive Rating (ORTG) of 101.1 (vs. the league average of 96.07). 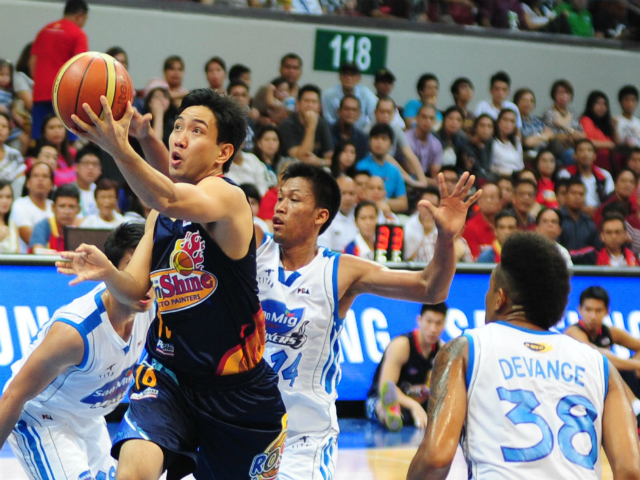 Their rebounding and assist numbers also clearly supported their offensive game. The team was not only the best rebounding team in the league, but they also were able to limit opponent offensive rebounds (only 26.2% of possible offensive boards were given up). This became a key element in fueling their high pace because it assured them of more possessions. Lastly, they also made the most of their personnel on the floor, leading the league in assists at 21 dimes per contest.

What then, led to Rain or Shine’s demise this conference?  Well, the fact is, the Elasto Painters just faced a Ginebra team that was playing their best basketball of the conference. However, taking the play of Ginebra out of the equation, we are left with a surprising statistic that seems to have sealed Rain or Shine’s fate.

Who could have thought, that a team with the offensive firepower of Rain or Shine actually ranked dead last in the league at three-point shooting, connecting on only 27.4% of their shots from beyond the arc. Of course, being without Jeff Chan for a big part of the elimination round affected them here, but the struggles from the arc were really seen team wide, with only Bruno Sundov, Paul Lee and the aforementioned Jeff Chan making more than 30% of their threes.

In my opinion though, Rain or Shine would have made it past the quarter finals If they had just beat the Meralco Bolts in the last game of the eliminations. Beating them would have given the Elasto Painters that same team in the quarterfinals instead of a streaking Ginebra. But, this is not the time and place to rant about things that have already passed. Instead, let’s move on to the next part of this post; where we reveal the team’s most and least valuable players.

While his performance this year dropped off a bit from a strong rookie season, Paul Lee was Rain or Shine’s most effective local player this conference that saw more than 20 minutes of action. In 26 minutes per game, the Angas ng Tondo averaged 10.8 points, 4.4 rebounds, 4.1 assists and 1.1 steals per game. Now, these numbers are not overly impressive, but it’s in how Lee put this together within the flow of the Rain or Shine system that made it so important to the team’s success. His 4.1 dimes meant he assisted on 28.2% of his teammates field goals while he was on the floor. Besides keeping the offense flowing by getting his teammates involved, Lee also carried the local scoring punch efficiently, scoring his local-leading 10.8 points per game on a true shooting percentage (TS%) of 50.9%.

Paul Lee may not have looked dominant this conference, but it was his ability to fit into the offense and still contribute heavily to it that makes him an invaluable member of this team.

Going by an eye-test, there is no way Beau Belga deserves to be Rain or Shine’s LVP this conference. He plays physical defense, grabs rebounds, gets put-backs, gets the crowd going (both for and against him), fires air pistols and just does everything he can for the Elasto Painters.

However, there was one big part of Belga’s game that was missing this conference, 3-point shooting. One of the pillars of Rain or Shine’s offense is the fact that most of their bigs have the ability to stretch the floor by being threats from beyond the arc. This conference saw Big Beau continue his anemic shooting from three that started in the Philippine Cup finals. In 14 games played, he made just 6 out of 40 threes, resulting to a 15% clip from downtown, a full 10 percentage points off his career average of 25%.

Bruno Sundov’s ability to hit the three somewhat negated Big Beau’s struggles from beyond the arc this past conference, but moving forward to the Governor’s Cup, Rain or Shine will surely need Belga’s shooting touch to come back as his ability to spread the floor will be critical to their offensive game plan.

After appearing in two straight conference finals, this quarter-final exit surely hurt Rain or Shine. But, this was still a good season for them and this is a team that could surely use the extra rest that an early vacation presents. Without a doubt, the Elasto Painters look to once again compete for the championship in the Governor’s Cup. But, what would they need to do in order to hoist the trophy once again? We end this Rain or Shine conference review with three things we think the team should think about moving forward.

Rain or Shine’s plan for retribution got swallowed up by the Barangay in the Commissioner’s Cup. This team has tasted success in the past and has recently swallowed the bitter pill of failure. Rain or Shine won’t be who they are if they didn’t bounce back strong. There’s only one goal in the Governor’s Cup for this team, defending their championship.

See more posts from this series