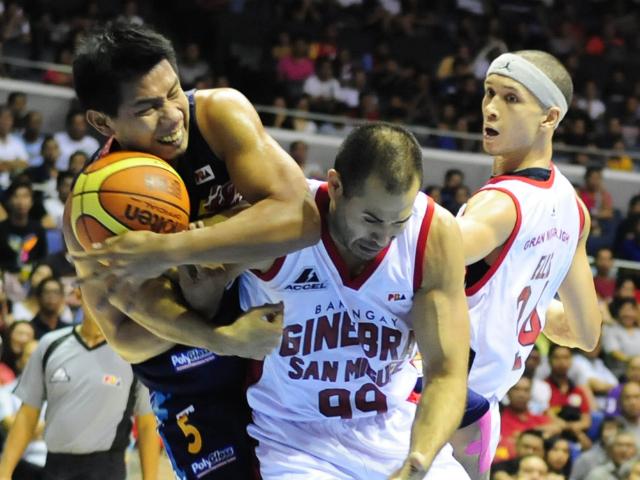 With Bruno Sundov joining the team, Larry Rodriguez saw his minutes dwindle in the Commissioner’s Cup. Although, in the Rain or Shine system, Rodriguez’s dwindling minutes still meant that he got around 11 minutes of court time per game. Larry Rodriguez is often the forgotten big man in the Rain or Shine rotation, as he is not an imposing physical presence as the Extra Rice tandem or as polished offensively as Jervy Cruz but he is in no way less effective as his more “popular” teammates.  As far as expectations go, Rodriguez is always about the little things… screens, box outs, tip-ins, help defense, basically all the behind the scenes stuff that makes the Rain or Shine engine click.

Larry Rodriguez definitely made his mark on the defensive end this past conference. With the rest of the bigs mostly handling the PF and C duties, Rodriguez at times found himself playing as the team’s SF, creating an imposing front line that can better defend against opposing imports. In his time on the floor, he excelled in two things: offensive rebounding and blocking shots. While he was on the court, Rodriguez grabbed 6.9% of available offensive rebounds (ORB%), that’s third on the team behind Sundov and Cruz. Looking at blocks, he was able to turn away a team leading 2.2% of their opponent’s shots (BLK%). For perspective, the highest BLK% in the Commissioner’s Cup was by former GlobalPort import, Justin Williams at 9.6%, which makes Larry’s numbers very, very respectable.

For somebody who plies his trade inside the paint, Rodriguez was only able to convert 39.6% of his shot attempts – a far cry from his career average of 52%. This was probably because he was taking too many jumpers outside the paint due to both the presence of imposing imports and spending quite a bit of time as the team’s small forward.

Larry Rodriguez is an effective player. However, in conferences with imports clogging the paint, the value he brings to the team diminishes greatly. Kudos to Coach Yeng for still giving him minutes, but in the last conference, those minutes may have been better suited given to other players like Jervy Cruz.