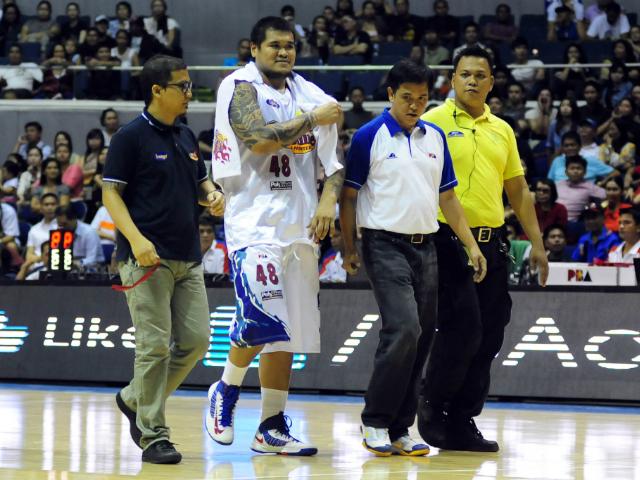 JR Quinahan had a difficult time staying out of (foul) trouble in the last conference. (Photo Credit: GMA News)

Known as the second serving of the Extra Rice duo, JR Quinahan was expected to bring much of the same as Beau Belga into the Commissioner’s Cup: provide a defensive presence, rebound, score inside and outside. Mostly coming off the bench, Quinahan was supposed to ensure that Rain or Shine’s physical brand of ball didn’t take a step back when Sundov or Belga took a breather.

In some ways, Quinahan actually had a better conference than Belga. With fewer minutes, he scored more points (5.1) and shot better from both the two point area (45.2%) and from beyond the arc (25.9%). He matched up mostly against local big men – Quinahan was able to use his size and bulk to get into good position inside where he was able to receive good passes or be in perfect position to put missed shots back. Out in the perimeter, opposing defenses usually chose to leave Quinahan with the open shot from the arc, choosing instead to focus on Bruno Sundov down low or containing the off-ball action created by the other players.

Quinahan definitely had the potential to contribute more to the team, but for some reason, he was just not able to. Since he was not tasked to guard opposing imports for most of the conference, I really don’t understand why he still averaged four fouls per game. With Coach Yeng unable to bring Sundov and Quinahan in for long stretches, the burden on Belga’s shoulders just got heavier and heavier.

Relative to expectations, JR Quinahan actually turned in an okay conference. His knack for getting into foul trouble definitely limited him, but it opened up minutes for other players like Jervy Cruz and Larry Rodriguez, so it’s actually somewhat of a blessing in disguise. The truth is, I know that management believes in keeping this group of players intact as long as possible, but, I really feel that JR Quinahan is a redundant piece in this team. Yes, he does bring that toughness that the Rain or Shine front line is known for, but he also takes away minutes from Jervy Cruz, a player that clearly deserves more playing time.