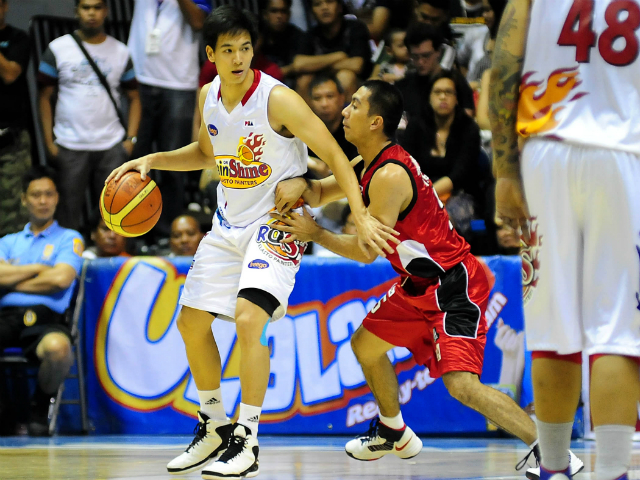 Chris Tiu in the post. Something we’d like to see more of. (Photo Credit: GMA News Online)

Entering the Commissioner’s Cup, nobody was really sure of what to expect from Chris Tiu. As the seventh pick in last year’s draft, many doubted whether his game will translate to the PBA or not. After the Philippine Cup, Rain or Shine fans weren’t really sure if what they saw was the best version of Tiu since he sat out most of the first conference with an injury. However, one thing clearly stood out after seeing Tiu play in the Philippine Cup… he can play with the big boys of the PBA. However, despite the good initial showing, expectations were not really heightened for the second conference. Yes, he was expected to contribute, but Rain or Shine would be happy with whatever Tiu gave them.

After the elimination round of the Commissioner’s Cup, Tiu averaged seven points, 2.8 rebounds and 2.3 assists. Those numbers don’t show it, but Chris Tiu was a revelation for Rain or Shine in the last conference. Coming in and playing almost exclusively as a point guard, Tiu ran the show efficiently for the Elasto Painters, assisting on 25.3% of made field goals when he was on the floor. When presented with an opportunity to score, Tiu was also able to make the most of the few chances he got (since most of the offense ran thru Sundov), finishing with an effective field goal rate of 51.3% and a 54.7% true shooting percentage, which all added up to a very impressive 105 offensive rating.

Defensively, Tiu did much to shed his angelic image as he drew from his years of experience in college and in Smart Gilas to play a very tough and physical brand of defense that clearly bothered opposing guards. At the end of it all, Tiu’s combined contributions translated to a PER of 15.7 (fifth highest on the team behind Sundov, Cruz, Norwood and Lee). And oh, I forgot to mention that he did get the loudest cheers from the crowd whenever he was introduced.

It’s really hard to find a fault in Tiu’s game in the Commissioner’s Cup. While his three-point shooting (25.7%) and turnover percentage (16.7%) can be improved, those numbers are actually within the acceptable range for guards. If ever there was something that I wish Tiu would have done more of though, it’s posting up. To some extent, he did take smaller point guards like LA Tenorio and Jimmy Alapag into the post, but the Elasto Painter offense can unlock an entirely new dimension if Tiu was utilized more in the post as compared to Norwood or Chan (let’s save that discussion for another time).

Considering the doubts that surrounded Tiu as he entered the league, the fact he has played this well comes as a very pleasant surprise for Rain or Shine. In fact, aside from the top two picks Fajardo and Abueva, we can say that Tiu has been at par or even better than Mallari, Hodge, Ramos and Ellis. With Coach Yeng employing a system that relies a lot on heavy decision-making and physical play, Chris Tiu certainly looks like a perfect fit for Rain or Shine… both on and off the court.