The staple cheer of the guys in maroon and white were louder than the usual that day. As I entered the MOA Arena on September 10, 2017, the place was electric.

My friend and I walked in during the 4th quarter of the first game of the season. It was the UP Fighting Maroons vs. the UST Growling Tigers. What’s interesting was, we didn’t really come for that game. We were supposed to watch the next game between the DLSU Green Archers and the FEU Tamaraws as my friend was a die-hard La Salle fan. Little did we know that we were in for a treat.

It was back to square one at the start of the 4th with the score tied at 57. After a furious exchange of clutch baskets, missed free-throws, and a useless foul by Gelo Vito, UP found itself down by 2 with 5.3 seconds left.

Prayers were up in the air during that last UP timeout. All the UP faithful was hoping for was one basket to tie or win the game.

The final play started with the ball in the hands of Jun Manzo. UP’s main guy, Paul Desiderio curled from the right side of the court using two down screens, got the ball, squared up, and took the long range bomb. Swish! People clad in maroon and white were in a frenzy after that shot as UP held on to win the game, 74-73. No one could deny, it was a magical moment. It was so magical that I barely even remember what happened to that DLSU-FEU game we watched.

Everything is better live, they say. But as I checked on the replay that night, this was one of the rare times that the said statement isn’t true. What we didn’t see and hear live was the huddle before that shot.

As Coach Ricky Dandan mapped out the final play, the players listened intently to every detail. There was silence and focus. And then out of nowhere, Andres Paul Desiderio blurted out the most famous phrase in Diliman in recent years: “Atin ‘to. Papasok ‘to.”

That was a bold move by Desiderio. Aside from the gravity of the situation, before that game winner, he was 1/10 from the outside! – Crazy guts to call thay play. “Matapang talaga ‘tong batang ‘to”.

But his bravest move yet in his career was what he did not on the court, but off of it.

Paul Desiderio hailed from Liloan, Cebu. He was a champion for the UV Baby Lancers and had the choice to continue playing there for College. He had the choice to stay home, with his family and friends, at his comfort zone. But instead, he chose the tougher path. He decided to brave a new land and lived independently as a student- athlete in Diliman.

However difficult it may have been for the kid, he and his family made the smart move. He got the rare opportunity of studying in the country’s premiere state university. Not all student-athletes can get quality education like that and Paul knew this. In an interview last year, he expressed that he was very much honored to be studying in a prestigious university like UP.

In terms of basketball, Paul also knew what he was getting into back in 2013. He knew that he had to anchor the rebuilding program of the Fighting Maroons. In the 3 seasons before he came in, UP was only able to muster 3 wins in total.

Other recruits may see this as something negative. As Coach Ronnie Magsanoc mentioned in an interview, you can’t blame recruits when they want to play for winners. Lucky for UP, Desiderio was wired differently. He wanted a challenge. He wasn’t scared. There was no fear in his heart. He embraced the tough task of bringing UP back in the Final 4 and bringing back that winning culture in Diliman.

And boy, Desiderio had a rude taste of reality in his freshman year. Bannered by former green archer Sam Marata, the Fighting Maroons wound up with a miserable 0-14 record – definitely not the way you want to start your UAAP career. 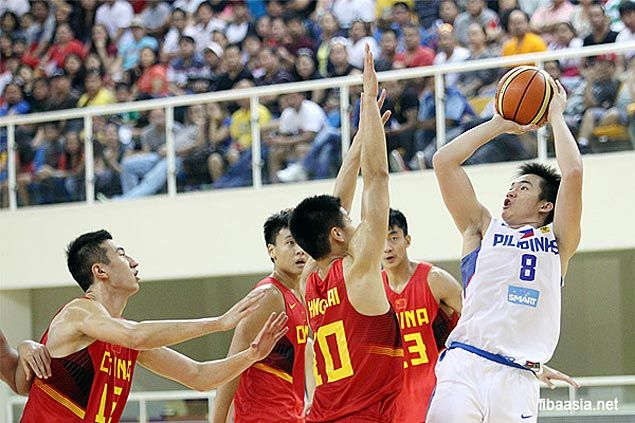 In season 77, Paul was chosen to represent Batang Gilas in the FIBA U17 World Cup. He had to skip the year to battle with the giants in other parts of the world. It was also the year wherein the bonfire game happened, a lone win against the Adamson Falcons that halted a 27-game losing streak for UP.

After a year of absence, he donned the green and maroon once again. This time, he’s partnered with another born scorer in Jett Manuel but with a new head coach – Their 3rd in three years. It was a difficult situation for Desiderio and the Fighting Maroons. They had no choice but to play the hand that was dealt to them. With an improved Desiderio, fresh from his international stint, it was a relatively successful season for UP as they finished with a 3-11 win-loss card.

His no fear attitude propelled UP to their best finish in recent years in Season 79 at 5-9. This was also the first year of Coach Bo Perasol in UP. It was then known that Jett was the leader of the squad but it was evident that Paul was the heart and soul of the team moving forward. With his effort on the court, Desiderio was rewarded with a Mythical Five Selection, a first for a player from UP in nearly 10 years.

His partnership with Coach Bo slowly brought the winning culture back in Diliman. The community felt it as Season 80 was filled with lofty expectations. It was the year UP would be back in the Final 4. They were off to a fiery start, that “Atin ‘to, Papasok ‘to” moment was something out of a movie. “Ang ganda ng script!” However, a 6-8 record was not enough. They were a game or two from getting to that goal but it wasn’t their time yet. It was one of the reasons Paul decided to come back and play his last final year. The mission is not yet completed.

Season 81 was an up and down one for Paul. He’s had some awful stretch of games but he remained defiant. For most part of the season, he took the back seat with the improved play of Juan Gomez De Liano and the solid production of the MVP, Bright Akhuetie. Despite the setbacks, the Fighting Maroons’ Team Captain knew what he can do and was never afraid to pull that trigger. His stubbornness paid off bigtime as he was able to bring UP back in the Final 4. His stubbornness enabled him to achieve a career-high versus the FEU Tamaraws in the second round, and some clutch performances, resulting in all-important wins for them.

Against La Salle, he churned out a solid 10 points, 4 rebounds, 2 assists, and 2 steals to complete UP’s mastery of the green and white this season to seal their place in the Final 4 for the first time in 21 years. It was a win that set the stage for a tough series against the 2nd-seed Adamson Soaring Falcons.

That Adamson series was a classic one. One for the books. It can also be dubbed as the Paul Desiderio series as he was instrumental in bringing the Fighting Maroons back in the finals after back-to-back wins against the Soaring Falcons.

UP won in Game 1 through a well-executed ATO play by Coach Bo Perasol but that wouldn’t be possible if not for the big step-back jumper by Desiderio with 5.5 seconds left in the clock to put them ahead, 71-69. It’s important to note that he was scoreless in the first half and poured all of his 19 in the 2nd half. Classic Paul Desiderio.

In Game 2, in the last minute of OT, with UP trailing by 1, 85-84, It was Desiderio who came to the rescue once again. He hit a clutch trey and tough fade-away jumper against the out-stretched arms of Sean Manganti to seal the W for UP – To have the courage to wave off everybody and go for an isolation play after shooting 2 of 18 before those 2 big shots? Paul was just something else. “Walang takot talaga.”

Entering the Finals, UP rode on a 5-game winning streak buoyed by the resurgence of the UP faithful who came in droves to support the squad. But the Ateneo Blue Eagles were simply too much for the UP Fighting Maroons.

Despite the Finals loss, Paul Desiderio can say that he was not only able to reach his target – He was even able to surpass it. After starting his UAAP campaign with a 0-14 record, who would’ve thought that he will be able to lead his team to the Finals? Mission accomplished. The winning culture is back – not only in the court, but also in the stands.

He definitely made his last playing year count. Next up for Desiderio is the PBA. He’s confirmed that he’s joining this year’s draft adding in jest, “Sana may kumuha.”. But in all seriousness, as early as now, some analysts are already skeptic about him playing in the big league. At 5’11” he’s too small to be a wing and he’ll have trouble if he doesn’t adapt and switch to playing point.

It may be true to some degree. But for Paul, this is just another challenge waiting to be answered. An item in his list waiting to be crossed out. This is where he thrives. Will it be easy? For sure it won’t be. But just like every Isko and Iska, he will find a way. We always do.