On the Expansion, Yeng Guiao and Concessions

More than two weeks ago, the PBA office had their final say on the concessions given to the three new teams: no direct hires, but we’ll soften the ‘Protect 14’ stance to ‘Protect 12’.

That is to say instead of giving you practice players, we’ll instead include end-of-the-bench players to your pool. We’ll also give you the best of the worst picks (11th, 12th, 13th of the first round and 1st, 2nd and 3rd selection of the second round).

I don’t know if I speak for many but I for one am waiting patiently for next season. Due to the disruption of this season because of the upcoming FIBA competition, this season has been one large asterisk for me. This season feels more like an obligation, so the league can say we still had a 2013-14 season when in reality the focus of the entire basketball nation in the Philippines has been on the Smart Gilas National Team.

Which is why I’ve taken an interest at the expansion pool and the draft, the main sources of players for the three new teams. Thanks to the good guys over at GMA Network, my work of identifying who the probable ‘Protect 12’ candidates are was simplified (see here and here). Did they get the list right? 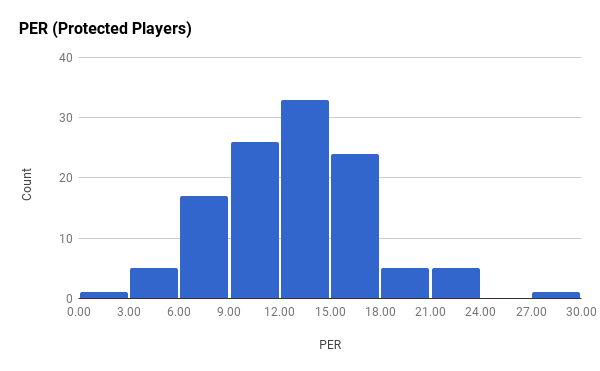 Although the histogram is skewed to the left, the bulk of the players fall somewhere around the 15 PER range 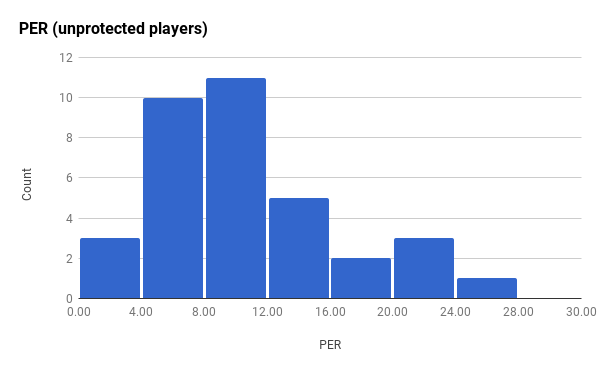 Looking at this chart, there isn’t much hope for the KIA/Blackwater/NLEX group. In fact, even if we took the best 10-man group in the expansion draft, it would still be barely enough to compete in the lower tier of the league. You think this lineup can win 5 games in approximately 20+ games?

It won’t. Even changing players here and there (Josh Urbiztondo, Don Allado, Nic Belasco, etc…) won’t be enough. And that’s taking all the best in the expansion draft … and putting them on one team. What more once we spread what little talent the expansion draft has among three teams? Doing a ‘Protect 10’ won’t be a game-changer although it will help, adding 2 or 3 more good contributors to a team. What about the other solution?

Yeng Guiao and ROS would have agreed to a Protect 10 policy (Photo Credit: Google Images)

The undrafted/3rd+ round pool (an additional “pool” that’s reserved for the three new teams) is barren as well with just two players over the past 5~6 years who have amounted to anything (Mark Yee and Josh Urbiztondo). Even considering other players still available for picking in the expansion pool (example, Ken Bono and Reil Cervantes, among others), all three teams will be looking at a losing season.As you can see, there is talent to be had in the 11-16 range. Not counting the 2013 draft (too early to tell, really), names like Emman Monfort (2012) and  RJ Jazul (2010) are players that I think can play 20+ minutes and contribute. Even the 2013 draft produced three already-contributing players (Melton, Fortuna and Camson) with two other players still waiting in the wings (Salva and Teng). All of this depends on the strength of the draft pool. The 2013 class might look strong but the 2009 draft certainly didn’t produce anyone outside the first ten picks.

Does this mean that all three teams have signed up to be in the PBA to be punching bags over the next 2+ years?

NBA fans will find this all too familiar (*ehem* Philadelphia 76ers *ehem*). But the PBA, a league that prides itself on being a 10 team-competitive league (whether it’s true or not is not the issue), will inevitably have 3 losing teams in their 2014-15 season. They’ll hope they can sign some players of the market, get lucky in some trades (which the PBA office has to approve) or get lucky in the draft. Whether the PBA will admit this or not (they won’t), the new expansion teams will not be competing for a spot in the semis (my personal beacon of “excellence” in the PBA) any time soon.

Is this fair? Maybe. Other PBA teams have the right to say “yes, it’s just fair” since most of them needed time to create a roster that resembles a PBA roster (somehow). Even with all that time and despite such a lax playoff bracketing (80% of the teams get into the playoffs, huge upset potential in the 1st round due to the short series), some teams never figure out how to compete year-in, year-out. (hello Barako! hello Globalport!).

The past instances of new teams (Globalport, Air21, Barako) are still building a playoff worthy () while the team before that (Rain or Shine) is just starting to come into its own as a powerhouse team. As noble as Yeng Guiao’s intentions are, becoming a competitive team in the PBA takes time. Sustainable success is never easy and quick. The key here for KIA, Blackwater and NLEX is to be patient and to have a game plan ().

One thing I do know is that the introduction of these teams will bring forth a new era in the PBA, an era that will hopefully spur the league to be better (as a competitive league and as an entertainment outlet).