Wasn’t that a drama-filled UAAP weekend? Well, it’s no surprise since it’s only a few weeks before the Final Four. That’s why it’s getting more dramatic, rougher and tougher for all the teams—including National University. This team, yet again, was included in another controversial game.

Questions still arise after the game. “Was it intentional?” “Was it an accident?” “Mukhang luto noh?” “Was the two-game suspension for Ralf Olivarez too much?”

The fact still remains though. The NU Bulldogs won, 81-73. They are now on top in the standings.

Although both FG shooting look almost the same, the main difference was in free throws. NU was sent to the line more and converted 22 out of 30 attempts. Like their last few games, the Bulldogs rotated the ball and assisted better, 17-7. On the flip side, UE was slightly better getting their missed attempts.

Review: Keys To The Game

Did the boys in Gold and Blue double their efforts to stay close to the Red Warriors? The Bulldogs definitely did so much better defending Roi Sumang from scoring baskets for his team. The starter for UE who averaged 20 ppg scored only 10 points, getting none of his eight 3pt attempts in. This is unusual for the guy who has been scoring triple after triple for the Warriors. National-U definitely did not give Sumang even one clear view from beyond the arc.

Take Advantage of no Mammie

The question in everyone’s mind is: who’s going to take over Charles Mammie’s absence? The answer, John Noble. But did he do justice in serving as Mammie’s replacement? In scoring probably, but rebound-wise no one stepped up and that was the department NU took advantage off. Bobby Ray Parks Jr. and Emmanuel Mbe snatched a combined 21 boards. 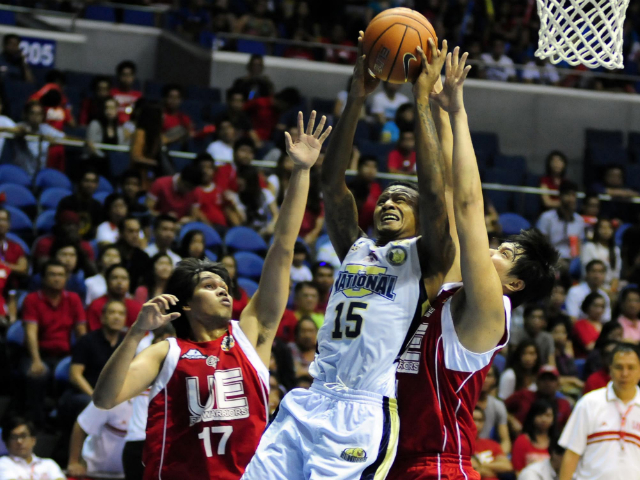 Keeping the pattern, NU yet again recorded a field goal percentage above 40% which is a good sign for the team that’s vying for the championship crown. Robin Roño unleashed his strengthening offense from the three-point line, converting three out of seven attempts. Dennice Villamor also contributed six points—all from rainbow country. We did not see much of Gelo Alolino but he did very well, handing out eight assists all throughout the game.

Coming into the game, we knew they (Mammie and Casajeros) will not play and UE will come out with a lot of emotions and use that. There were parts that we lost composure but the good thing is that we regained it.

The Bulldogs are not known for their strong end games but this time around, they are proving that a team can improve when they really want to.

It’s going to be tighter as we battle the UP Fighting Maroons, DLSU Green Archers and ADMU Blue Eagles consecutively. By the looks of it, the Bulldogs are out to get them all.