Every time I shoot around in our local barangay court, two 10-year-old kids who are at least two feet shorter than me, run up and challenge me:

The first time they did it, I was baffled. Not only were they a heckuva lot shorter, but they were also giving up a ton of experience. I was about eight years older, and around a hundred pounds heavier than them. I could have just easily stood there and blocked their shots, and on the offensive end, barrel my way inside for easy points.

Why were they challenging me to such an affair? It made no sense. They would surely lose. But then, I remembered a quote by best-selling author Richard Paul Evans that goes:

“The thing is, the only real sign of life is growth. And growth requires pain. So to choose life is to accept pain.”

Pain is something which Filipinos have long had trouble accepting, at whatever level they encounter it in life. From politics to sports, Filipinos hate the pain that losing brings. It’s just too tough to bear for some people. When it comes to hoops, this leads to Filipinos blaming multiple things for their losses.

Then of course, there’s the race issue: foreign student-athletes.

Those who are against the concept of “imports” say these towering titans bring unfair advantages in height and athleticism. They also argue that these foreigners hinder the development of local big men, such as how Karim Abdul kept Paolo Pe stapled to the UST bench, or how Ben Mbala is basically closing the door on fellow Green Archer Larry Muyang.

These arguments are so convincing that the two main collegiate leagues in the country are phasing out/limiting foreign student-athletes over the coming seasons. In the NCAA, teams are no longer allowed to recruit FSAs. Once the current crop has used up their years of eligibility, they’re gone. Things haven’t gotten that far in the UAAP, but squads are now only able to roster one FSA, as opposed to the past when they could have two (although only one could be on the court at a time).

But I believe that the arguments against FSAs are flawed. If you’re a legit student in your college or university, you should be able to play, PERIOD.

The San Beda Red Lions of Season 87 proved some of their doubters wrong with an All-Filipino win. // InterAksyon

There may have been foreigners before in Philippine college hoops, but the concept of getting a huge foreign center to reinforce your team was really brought to the forefront by the San Beda Red Lions.

With Sam Ekwe in the middle, the Red Lions ended a long title drought and catapulted themselves into the elite of the NCAA. After Ekwe’s eligibility played out, the Red Lions brought in Sudan Daniel.

Sudan “Superman” Daniel was known for his high-flying dunks and super-charged play. He was named Finals MVP during the Season 86 NCAA Finals, finishing off a dominant sweep for an all-worldly San Beda squad.

During the preseason, Daniel was diagnosed with an ACL tear, which essentially ruled him out for the whole season. Did this derail the title hopes of the usually Foreign Student Athlete led Red Lions team?

Not under Coach Frankie Lim’s watch.

Under some excellent coaching and excellent play by Garvo Lanete, Dave Marcelo and Baser Amer, the Red Lions finished the elimination round on top with a 16-2 record. They wound up in the Finals once again, matched up against the Calvin Abueva-led San Sebastian Golden Stags.

Did disaster strike for San Beda? That wasn’t the case at all, as they swept the Stags in the Finals, finishing with the championship once again. With enough hard work and smarts, San Beda proved that they’re not just a team that can win championships because of foreign help. They can do it “All-Filipino” if they have to.

The Ateneo Blue Eagles is a team known for having dominant centers…at least, that was the case when Coach Norman Black was at the helm.

When Coach Bo Perasol took charge, the team went 7-7 and out of the postseason in Season 76, then rebounded in Season 77 with the number one overall seed. However, they lost in the Final Four, despite having a twice-to-beat advantage to the NU Bulldogs.

Season 78 was supposed to be different. Why? The team hoped that foreign student athlete center Chibueze Ikeh was the long-awaited missing piece. 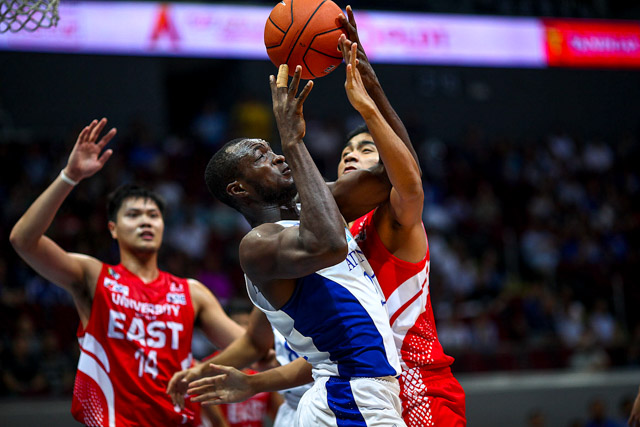 Did Ikeh impact Ateneo all that well when it mattered? // ABS-CBN Sports

Having Ikeh excited the Ateneo community. The hope was that he would be a throwback to when the team paraded guys like Ford Arao, Rabeh Al-Hussaini, Justin Chua, and Greg Slaughter.

Sadly, he wasn’t exactly that.

The table above shows Ikeh’s Advanced Statistics in Ateneo’s lone playoff clash against the FEU Tamaraws. The important statistic to take note of here is Ikeh’s ORTG and DRTG, which resulted to a negative Net Rating of -1.4. That meant Ateneo lost more when he was on the floor, than the other way around.

On the other hand, the table above shows another Ateneo big man’s advanced statistics in Ponso Gotladera. During the Season 78 Final Four, Ponso was notably impressive, especially when it came to his ORTG and DRTG. His Net Rating resulted in a positive 18.4, which meant that having him on the court paid plenty of dividends.

This isn’t to say that Ikeh isn’t a good basketball player. In fact, as shown by his performance in the recently-concluded FilOil tournament, he has improved leaps and bounds since last season. What this simply shows is his value during Season 78 was overrated. You don’t need an FSA to do well. You simply need a good big man who is willing to do the dirty work for you.

Troy Rosario has been a revelation in Philippine Basketball as of late. // FIBA

Let’s take a look at the physical tools of Troy. He’s 6’7″, weighing in at well over 200 pounds filled with muscle. He’s athletic, has decent moves in the low post, and has a ton of length as well. Filipino hoops logic would have immediately placed Troy at center. But during his tenure as an NU Bulldog, that couldn’t be the case.

For his first few years as a Bulldog, Troy was played as a back-up behind the ever-reliable FSA Emmanuel Mbe. Eventually, with enough work, Troy was able to learn new skills to play as a more versatile big man come his second season in the UAAP. Soon enough, as he eventually played alongside Alfred Aroga, he blossomed into one of the best young players in the country. Ranidel de Ocampo comparisons started to come up. From being a potential center, Troy turned into a more than ideal stretch-four for Gilas Pilipinas given his expanded skill set. Why was this the case?

He worked hard, and we can also say that he was forced to develop other aspects of his game, given Mbe and Aroga’s presence during his time in the UAAP. Rosario couldn’t be just a banger in the post because there were two guys who did that better. Mixed with hard work and excellent coaching, Rosario was eventually able to transformer into a player with highlights such as these:

The San Beda Red Lions continued to field foreign centers even after Daniel exited. Ola Adeogun helped them to three championships from NCAA Season 88 to 90. In Season 91, he was looking to go out with a bang, and a fourth straight trophy. What made that look inevitable was the fact that Adeogun, in Season 91, would be playing with his successor at the same time, Donald Tankoua.

And yet, despite not one, but two foreign centers, the Red Lions did not win last season’s NCAA title. Instead, the champions were a team that opted not to field a single foreigner: The Letran Knights. 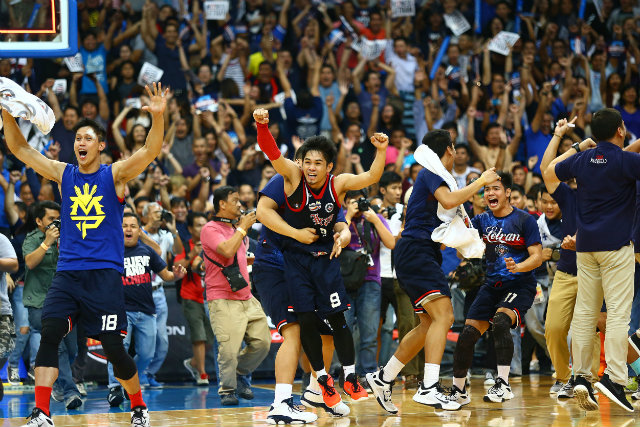 Legendary? Most probably. What is certain is that this team was inspirational. // Rappler

Letran famously, or perhaps, infamously prides itself as an All-Filipino squad. Is that close-minded? Perhaps. But here are a few other adjectives for the Knights: “relentless,” “hard-nosed,” and “tenacious.”

In Season 91, under newbie head coach Aldin Ayo, the Knights took the NCAA by storm with their “mayhem” defense. Behind their high-scoring trio and insane amounts of pressure defense, Letran went to the Finals, and were able to end San Beda’s dynasty in three games.

They didn’t have any towering centers, but the entire squad worked hard, and played smart as a team. As a result, they ended a 10-year title drought, and showed that you didn’t need an FSA to be crowned champs.

So, what’s the common denominator between my examples? The answer is clear – there isn’t one.

San Beda won titles with an FSA and without an FSA. They also lost with two FSAs, and without one.

The last three seasons have seen Ateneo fail to win, without an FSA, and with one.

Letran defied expectations by winning a championship while going all-Filipino.

Troy Rosario is a emerging superstar, and he did it while playing behind and alongside FSAs.

So when someone wants to ban foreign student athletes because they supposedly make teams too tough to beat, or negatively affect Filipino big men, those are simply excuses.  It’s a way of rationalizing losses, much like blaming referees.

It’s also leading us to mediocrity. Instead of making a team want to train harder to be better, and instead of a player seeing it as an opportunity to go up against against better talent, either as an opponent or a teammate in practice, some people prefer to accept mediocrity and call for a ban.

Yes, basketball is a sport where one great player can easily standout versus five good ones. However, FSAs are not a magic silver bullet. They are not a cheat code that automatically results in one team zooming all the way to a championship.

It’s time to stop the mediocrity. The only way we can do that is to stop the finger pointing and instead start the work necessary to get better.