Made Shots, Gave Shots, Rain or Shine Ties It Up

In game one, Alaska took Rain or Shine out of their comfort zone by slowing the game down and banged on the inside.

In game two, the Rain or Shine Elasto Painters returned the favor.

However, instead of banging inside to score points, Rain or Shine went back to their age old reputation of being the most physical team in the PBA and were successful in frustrating key Aces players en-route to a 99-87 victory to knot the best of five series at one game apiece.

In separate pivotal points in the game, both Henry Walker and Gabby Espinas lost their cool and had to sit out and was ejected respectively. 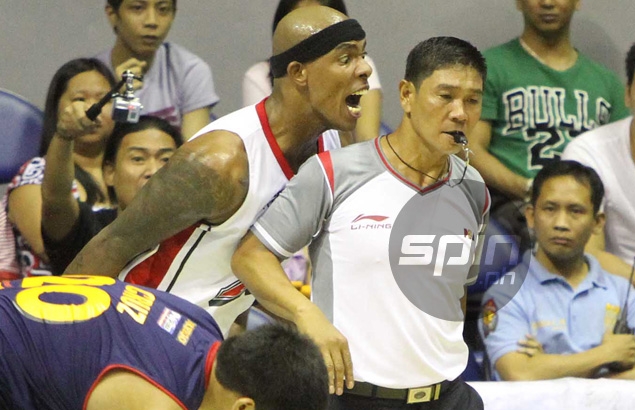 Best caption to this photo wins something (maybe) from Humblebola! Comment below! (Photo Credit: spin.ph)

It seems that Alaska did get the short end of the stick here as they only got to the line 23 times (compared to ROS’ 37), despite attempting 21 more shots from inside the arc. This definitely got into the heads of the Aces as various players were seen complaining to the referees throughout the game.

These two teams are arguably the two most physical in the league today and expect more overly physical battles as the series goes along, with the team that loses its cool probably the one at the losing end of the game.

This was an extremely physical game from the start. (Photo Credit: Pranz Billones, Sports 5)

Without Gabe Norwood, ROS flexed their trademark depth as Chris Tiu stepped up with 10 points, while Paul Lee came through in the clutch, putting in two triples in the final frame to finish off his 21 point, 7 rebound and 2 assist night.

Losing Gabe Norwood for this series is definitely a big blow for ROS, but one good thing that has come from this would be more floor time for more reliable outside shooters in Tiu and Arana.

With the series now tied, what does Coach Yeng have to do to go up 2-1 on Tuesday?

No, I don’t mean continue to hurt other teams, but looking at the stats from both games, we see that ROS has been unable to play their style (force turnovers, get out on transition) against the Aces

This is a far cry from the team’s averages of 17 opponent turnovers and 18 fast break points during their six game winning streak before the playoffs. ROS fans should take comfort in the fact that this series is tied at 1-1 despite the Elasto Painters playing un-Elasto Painter basketball. With the officiating expected to be focused on the play in the interior, ROS could then benefit from turning up their intensity on the perimeter to create some easy opportunities on the break.

Beau Belga definitely got the last laugh from this one. (Photo Credit: Pranz Billones, Sports 5)

Expect Rain or Shine to do just enough to edge Alaska and go up 2-1 on Tuesday.