Know Your Enemy: Eyeing the Competition in the Manila FIBA OQT

In the words of American actor and comedian Kevin Hart, “It’s about to go down.” Nine long months have passed since China iced the Philippines in the 2015 FIBA Asia Championship, setting back the Olympic aspirations of the equatorial archipelago. It was a thrilling chapter in Philippine basketball history—the reduced pregame warm-up time for Gilas due to a bus delay, questionable calls by the refs, and bottles tossed by a trolling Chinese home crowd. There was disrespect, political undertones, and an MVP in beast mode. It was glorious in the most acrid sense of the word.

Now, here we are. The wait has been torturous; questions and hot takes about who should have been included in (and excluded from) Gilas 4.0 continue to pile on through comments and tweets, but it’s time to face the music. The FIBA Olympic Qualifying Tournament is upon us. In the end, only one team will leave Manila happy, with a last-minute ticket to Rio de Janeiro, Brazil. Only one team will earn the right to be called Olympians. Between tip-off on Tuesday and the final buzzer on July 10, expect nothing but Darwinistic survivalism in full display on the court.

It’s gonna be a war, and one hell of a show. These are the squads out for blood:

The View: Team France is the favorite to win Manila because that’s how it is when you’re the highest-ranking ball club in a tournament. The team’s stars, Parker and Diaw happen to be decorated players on one of the best (and “boring”) teams in the NBA. Parker—who’s on his last stint with Team France—runs the offense and can get buckets. Diaw is creative and adaptable. De Colo is the reigning Euroleague MVP, so he’s probably good. It’s worth noting that The Blues are raring to bounce back from their disappointing 2015 EuroBasket finish. They swept their first seven games, but lost in the semis to the eventual champion, Spain. They then defeated Serbia to clinch the bronze medal. Warning: Category V Kaiju. Sound the alarm.

You’ve got dirt on your forehead, mate. // nzhoops.co

The View: New Zealand enters the tournament with a core that is highly experienced in international hoops: forwards Mika Vukona and Tom Abercrombie, guard Corey Webster, and centers Isaac Fotu and Rob Loe.  Expect Webster, a high-volume scorer, to carry the offense. He led the team scoring-wise in the 2014 FIBA World Cup and 2015 FIBA Oceania Championship, averaging 13.7 and 19.0 points, respectively. While Oklahoma City Thunder big man Steven Adams’ absence inspires relief in opponents, Fotu’s versatility demands respect. From a competitive standpoint, the Tall Blacks are more at par with their Asian counterparts than their European adversaries. It will also be interesting to see the Tall Blacks’ collision with Gilas, as they’ll be playing against their former coach in Tab Baldwin. The View: As evinced by Turkey’s drubbing of Gilas Pilipinas in their recent tune-up games, overcoming the 12 Giant Men is no cakewalk by any stretch of the imagination. Former Boston Celtic and Cleveland Cavalier Semih Erden is a strong and quick seven-footer who finishes well around the rim. Joining him in bolstering Turkey’s frontline is New Orleans Pelicans center Omer Asik. His rim protection will prove paramount against smaller teams, but don’t be surprised if opponents attempt to take advantage of his bad free throw shooting (55.2 FT% NBA career average). Ali Muhammed, despite standing at a measly 5’10”, can flat out ball; he averaged 15 points, 4.2 rebounds and 4.8 assists in EuroBasket 2015. The 12 Giant Men may have finished in 14th place in their last international tournament, but they emerge as favorites here, second only to France.

Hamady Ndiaye would like to change into something more comfortable. // fiba.com

The View: Having been drawn with Canada and Turkey in Group A, Senegal is clearly the underdog of the three. This is further emphasized by the absence of their biggest star in Gorgui Dieng, who averaged 16 points, 10.7 rebounds and 1.5 blocks in the 2014 FIBA World Cup and 22.9 points, 14.9 rebounds, 3.7 assists, 1.4 steals and 1.3 blocks in the 2015 AfroBasket. The Minnesota Timberwolf’s inside presence would have warped opposing defensive schemes, creating scoring opportunities for his teammates. But there’s no use in crying over spilled milk. Naturalized recruit Hannah Clevin, a point guard from Liga ACB (Spain), is a bright spot for the Lions; his outside shooting and playmaking will come in handy beginning on July 6. Senegal will direly need solid contributions from forward Antoine Mendy. He was the second-best scorer in the team (after Dieng) during the 2015 AfroBasket, averaging 16.3 points. If the Lions play their cards right and out-hustle the Goliaths in their group, they have a shot at the next round. 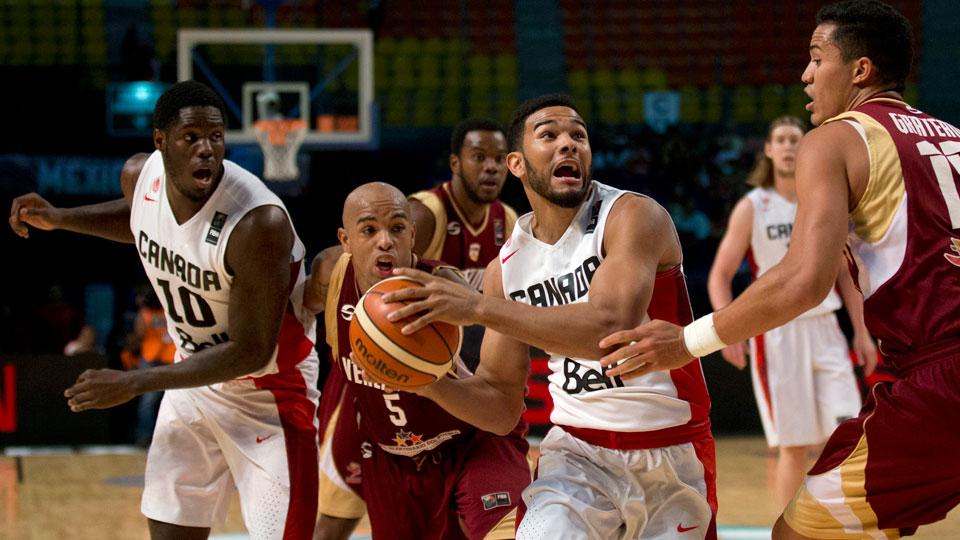 Can anyone guess what ghastly figure Cory Joseph caught sight of? // si.com

The View: If you’re rooting for Canada, the names not in the final roster must be killing you (ex. Andrew Wiggins, Nik Stauskas, Trey Lyles, Kelly Olynyk, Jamal Murray, Robert Sacre) but as with all things, you gotta to work with what you have—and what you have is an intersection between skill, youth, and experience. Cory Joseph, a well-rounded point guard, will lead the charge. His defense, playmaking, and aggressive assaults at the rim have done wonders for his Toronto Raptors and Road Warriors. He makes his teammates better when he’s on the floor and delivers in clutch situations (his game-winner against Mexico won Canada the bronze medal in the 2015 FIBA Americas Championship). Surely, something has to be said about the late addition of NBA champion Tristan Thompson. His efforts on the glass should be an asset for Team Maple Leaf. Hopefully, he has long washed away the scent of champagne as he dons his national colors. The Road Warriors happen to be thin on the wings, so how their backcourt and front court make do will be a focal point as the tournament rolls on.