I had the opportunity to watch the Ateneo-La Salle FilOil Flying V Premier Cup match last Sunday live. Coming into the game, I wasn’t expecting much from the Blue Eagles. In fact, I was expecting for it to be a bloodbath in favor of La Salle. Even just on paper, the disparity in talent and preparation between the two rivals was simply too much. La Salle was bound to destroy Ateneo.

Come game time, my expectations were met. La Salle did indeed destroy Ateneo. The Ben Mbala-led squad simply was more stacked, and more preapred. But even though I had predicted that would be the case, I was still in awe at the performance of La Salle…

… while I was in complete shock over the performance of Ateneo. The last time Ateneo got destroyed this bad? Probably during Season 78 in their first game against the FEU Tamaraws. And that defeat paled in comparison to how the Green Archers pin-cushioned the Blue Eagles.

I usually answer them with a sheepish “no.” I think “Dark Ages” is too much of an overreaction. But after further reflection, that “no” seems insufficient. If asked now, I would answer that question with a statement:

It’s time for a rebuild.

But what exactly is there to rebuild in the first place? Well, let’s look at the Blue Eagles’ glaring weakness over these past few years:

These guys were supposed to continue the Ateneo dynasty. Life just doesn’t work that way. // spin.ph

Did they get the best players who fit into the “Ateneo culture?” Not exactly. They aren’t prim and proper, like the stereotypical Atenean, but then, Ateneo has always had players that don’t fit that bill, like Ryan Buenafe, Eric Salamat, and Rabeh Al-Hussaini. But in the case of the latter players, things worked out in the end. So what has been different with this batch of recruits?

We can easily point fingers at the players because of this whole mishap, and it would not be incorrect. It was their responsibility to go to class and pass their courses, same as non-student-athletes. They weren’t able to do that, and now they have to pay the price. However, they’re not the only one who are also involved in his mess.

The team management also has to reflect on what they did wrong in this whole mishap. Did they stray too far away from how things are supposed to be done in the Ateneo? Were they unable to show enough care with these recruits?

The point is, everyone made a mistake here. No matter whose fault it ultimately is, what truly matters is acknowledging that recruitment has been a failure. No other way to put it. What’s worse is that from the looks of it, Ateneo was looking to build their team around these recruits.

Now, here we are, with Ateneo fans in panic-mode, with no idea where to go next.

Not just yet. I think the better answer to all of these?

But what exactly do we have to rebuild here? Where can we start? We can start with what made the Ateneo program so great in the first place.

Homegrown products. So if there’s #PinoyPride, in this case, we’re going to be talking about #AteneoPride. 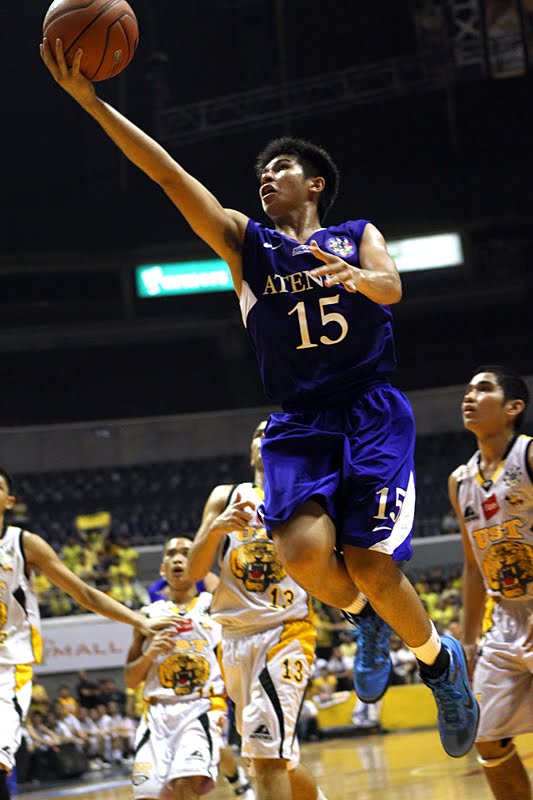 Kiefer Ravena was one of the greatest Blue Eaglets to stay home in Katipunan and don the Blue and White. // google image

The homegrown program has worked for the Blue Eagles. The players whom I mentioned above can easily be considered as legends in Ateneo basketball lore. But what about over these past three seasons? Let’s take a look at the Blue Eaglets who have stayed in the nest:

So we can start with these players. Of course, we can sprinkle in some of our recruits such as Tyler Tio and Adrian Wong, but in the end, we have to realize that the homegrown talent is there. These aren’t just names forced into the conversation. These are players who have made a name for themselves with their overall outstanding play.

We’ve looked to the past, and have just examined the present. But what about the future, you ask? There’s still plenty of reasons to be excited about. In fact, I can give you five.

SJ Belangel is seen by some fans as the heir apparent to Kiefer Ravena’s throne as the Phenom. // google image

These guys are all players who are brimming with potential. They play the right position fit for their height, and if not, they play a smaller position which is usually a good thing.

So what’s the point? The point is, the pieces for a solid rebuild are there. We don’t have to look elsewhere anymore. Mayroon ka na nga, tapos maghahanap ka pa ng iba?

This is a rebuild which won’t be anything like the Dark Ages of the 90s. It won’t take us 14 years to be able to capture a championship once more, or at least contend for one. We happen to have some of the best young players in the country, so why not develop them?

The Blue Eagles are sure to go through some struggles this Season 79. Their roster is young and lacking a clear leader, unlike in past years. Contending for a championship is realistically, going to be extremely difficult.

But that’s a problem for the immediate future. Long-term, the Blue Eaglets have a solid, homegrown program that can produce great players for their Blue Eagle kuyas, who can tow Ateneo back to the top of the mountain.

It will take time, but in the end, it will be worth it.