After a 10 game week in the PBA, only one thing remains certain. The Petron Blaze Boosters will finish the short elimination round as the #1 seeded team. Everyone else from two to seven is still jumbled up, with the bottom two teams only needing a victory and some luck to stumble into the playoffs.

Behind Petron, Meralco has maintained its level of play, while San Mig Coffee has peaked at the right time and has tied with Meralco with a 5-3 win-loss record. We also saw traded players see action for their new teams as Asi Taulava, Joseph Yeo and Mike Cortez all made their debuts this week.

With the elimination round entering its last legs, let’s see who our front-runners are for this week’s PBA Awards Watch.

Petron has looked absolutely dominant after dropping their opening assignment against Meralco this conference. They’re riding an eight game winning streak heading into the playoffs. In Petron’s three game week, Santos averaged 13 points, 9.6 rebounds and 1.3 assists per game while shooting 46% from the field. Marcio Lassiter may be the team’s leading and most potent local scorer, but Santos has been quietly dominant in his own way. In last Sunday’s game against Globalport, he matched-up against Jay Washington for almost the entire game, scoring on the former Booster at will while forcing him into a miserable 36.4% outing from the field with five fouls.

Is another championship on the horizon for Santos? (Photo Credit: AKTV)

Ginebra controversially won its lone game this week as Tenorio submitted a sub-par performance in terms of shooting the ball (30%), but he still finished with an eight point, six rebound and 10 assist night. With Ginebra having two games left and their chances of not making the playoffs still alive and well, expect Tenorio to bounce back from this game strong as he attempts to lead the Gin Kings to a strong finish.

Two straight defeats for the Commissioner’s Cup champs as Thoss slowed down this week, hitting only 40% of his shots and grabbing only six and five boards in the two games. Alaska’s once feared frontline has struggled recently, with both SMC and Petron’s quickness exposing Alaska’s lack of a true rim protector. If the Aces want to enter the playoffs with a twice to beat advantage, Thoss must once again shift his game to a higher gear.

Watching Petron, you don’t really notice how dominant Elijah Millsap is. This team is just playing so smoothly that each and every player seems to blend into and flow with the offense regardless of the line-up on the floor. It is only when you look at the box score do you realize how much Millsap brings to the table for the Blaze Boosters. His stats this week: 26 points, 12.3 rebounds and seven assists. Granted, he also averaged 6.3 turnovers, but that’s forgivable at this point for his team. In their last game, Petron let a Globalport team hang on for too long, forcing Millsap to play 41 minutes, which he converted into a quadruple-double of 18 points, 15 rebounds, 10 assists and 10 turnovers. Compared to other imports, Millsap’s numbers certainly don’t stand out, but he has led his team to more wins than any other import, and that’s the statistic that matters in the end. 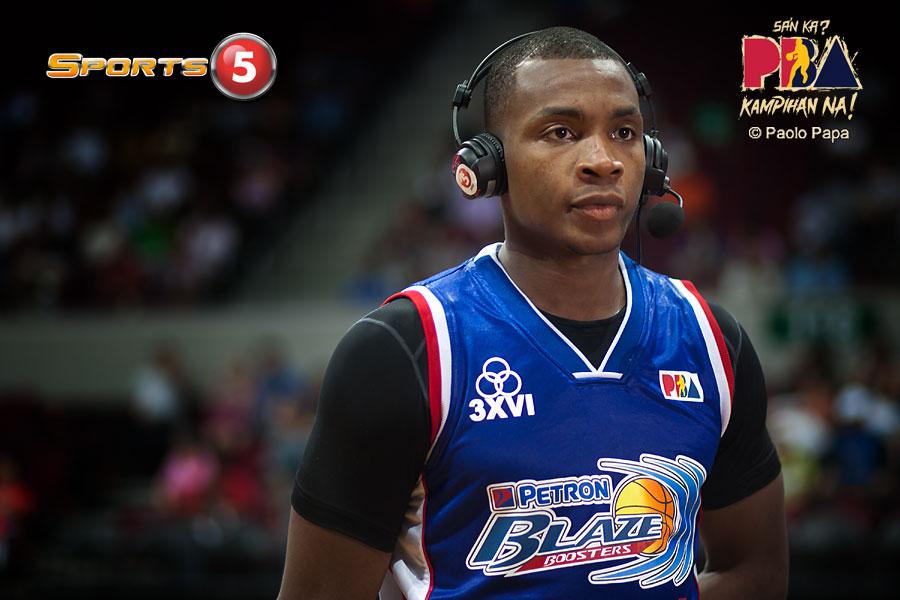 Elijah Millsap and Petron are a match made in the post-Balkman heaven. (Photo Credit: Paolo Papa, AKTV)

Bad week for Barako Bull as they go 0-2. Despite the team’s struggles, the Singletary show continues on its efficient scoring tour. Check out these percentages for him last week: 58.3% from the field, 75% from beyond the arc and 75% from the charity stripe. It’s just too bad he got almost nothing from his local teammates in their two games this week. As far as import scouting (?) goes, you have to tip your hat to whoever’s doing it for the Energy Cola as they’ve brought in two pretty solid reinforcements in Evan Brock and Michael Singletary the last two conferences (Yup, I turned a blind eye on DJ Mbenga).

Mario West continues to carry the offensive load for a Meralco team whose defense may have slipped last week as they gave up 91 points to Globalport and 100 to Alaska. Honestly, West’s percentages from the field are passable at best, but it’s rare that we see someone who can string-up points quite like him. I’m not sure how he does it, but he is just able to produce points exactly when his team needs it. Defense may be the Bolts’ calling card this season, but they can rest assured that Mr. West will deliver when they need some punch on the offensive end.

Cliff Hodge is definitely trying to make the Rookie of the Year race way more interesting than the two-man race between Abueva and Fajardo. In Meralco’s 1-1 week, Hodge averaged 16.5 points, 12.5 boards (7.5 offensive) and 1.5 blocks. This includes their game vs. Air 21 where he exploded for 24 points and 13 boards (six offensive). We know what to expect from Hodge on a nightly basis (relentless energy, feisty board work, tenacious defense), but a consistent midrange to outside shot? That’s something new. We’re still not convinced if the range is the real deal at this point, but his conference numbers of 9/25 or 36% from beyond the arc does already point to his makes being more than just a factor of luck.

Monster week for Fajardo as the Blaze Boosters made it a point to get him going early this week. For the conference, the big man from Cebu is averaging 9.3 points, 8.6 boards and a team high 2 blocks per game while converting more than half of his shots. It’s good that Coach Gee is trying to get Fajardo more involved in the offense as Petron’s hopes of a championship should lay heavily on his wide shoulders.

Abueva finally exploded against Petron with a 16 point, 10 rebound and five assist game in a losing effort. It’s been a tough conference for Abueva since McKines has laid claim to Abueva’s do-it-all role on this team. For the conference, Abueva is not only struggling to score the ball, but he’s also turning the ball over too much (3.7 per game) and is also fouling a bit more than needed (3.9 per game).

In eight games played, Hugnatan has averaged nearly a double-double with 11.9 points and 9.7 rebounds per game. Many have credited Coach Ryan Gregorio for the Bolts’ suddenly impressive defense, but such a thing wouldn’t have been achieved without Hugnatan’s no-nonsense physical game in both ends of the court. There’s a reason he’s getting all this playing time, he’s earned every single minute of it and his team’s 5-2 record supports it.

Hugnatan has reintroduced himself to the PBA with his play this conference. (Photo Credit: pba-online.net)

How happy are we to see him back! Air 21 has gone 1-1 since Taulava has joined the Ube Republic and right off the bat; you know that he is still a game changer at the age of 40. In his 2nd game back, Taulava posted a monster 14 point, 19 rebound performance in a losing effort against the Meralco Bolts. It hasn’t been all that shiny though, as he’s just hit 31% of his free throws and is averaging four turnovers a game. Truly exciting times for Air 21 and I honestly hope that Taulava continues to rock purple next season.

With everybody not named Singletary and Siegle playing inconsistently, Mark Macapagal has carried the extra burden in Barako’s last three games (11, 9 and 16 points scored). True to the Rajko system, Macapagal has made use of his range as he made 50% of his threes in those three games. Have the Energy Cola found another weapon? Or will he end up running out of steam next week?

What do you guys think of our contenders for the PBA awards? Let us hear your thoughts in the comments below!