After two weeks of play in the country’s premier professional basketball league, we have enough of a sample size to release our very 1st PBA awards watch for the Governor’s Cup. We’ll be giving our take on whom we think are the contenders for this conference’ best player, rookie, import and break-out performances. We’ll be “awarding” the players before the playoffs start, so it’s going to be a quick awards watch this time around.

Let’s get the ball rolling below: *just a caveat, with most Gilas stars just getting back into the groove and some teams only being able to play one game as of today, the initial weeks of this feature is bound to see a lot of changes :)

Ginebra may be just at .500 early in the season, but their win over Meralco had LA Tenorio written all over it. Check out this line: 34 points, seven rebounds and seven assists on 11/13 from the field, including 5/5 from beyond the arc. It didn’t matter if one of the league’s best on ball defenders in Chris Ross was on him all night long, he just scored at will and had Ross on a string. Tenorio knew that his team couldn’t start the conference in a 0-2 hole and he went out and did something about it and that’s why he deserves the top spot this week.

With Rain or Shine not getting much out of Gabe Norwood and Jeff Chan early on, the team went to Paul Lee as their main local guy and he delivered in spades. In ROS’ three games (2-1), he has averaged 13 points (45% from the field, 31% from deep), 5.3 rebounds, 4 assists and one steal a game. More impressively, in 90 minutes of total court time, the Angas ng Tondo has only turned the ball over a total of two times, something that is very critical to his team’s offensive game. At the end of the day, It’s this type of complete performance from Lee that has allowed the Elasto Painters to survive being shorthanded thus far in the tournament. The question though, is whether Lee can keep this up when both Chan and Lee inevitably get going.

Like Paul Lee, Sean Anthony has been the beneficiary of extra opportunities because of the rest awarded to TNT’s Gilas players (Alapag, Williams  Castro, Fonacier and De Ocampo. In 44 minutes of play per game, Anothny has averaged an impressive 22 points, 6.5 rebounds, 1.5 assists and 3.5 steals per game. He may not be the shooter that Dillinger was, but at after TNT’s first two games, Anthony has shown that he can be a potent contributor when given the minutes and the requisite shots. Do I expect him to continue this type of performance? No. But, a TNT team at full strength will see Anthony potentially anchoring their bench attack… not bad for someone who averaged only 24 minutes a game for Barako Bull last conference.

Barako Bull currently shares the lead position this conference with a 2-1 record and Michael Singletary has been incredible for Coach Rajko Toroman in those three games. In 42 minutes per game, Singletary has averaged 36.7 points (including two 41 point outbursts), 15.7 rebounds (6 offensive), 2.7 assists and 2.3 steals per game. What’s more impressive with Singletary is the fact that he’s getting these numbers while still playing within the Barako Bull offense. Coach Rajko has smartly tried to stay away from isolations as much as possible with his import, choosing instead to run him off multiple screens every single time on the floor, leading to better and more efficient looks. With Barako Bull in dire need of firepower every game this conference, expect some more monster 40+ point games from Singletary moving forward.

Something tells me that we haven’t seen the last of Singletary’s 40+ point scoring outbursts this season. (Photo Credit: abscbn.com)

Globalport is tied for the #1 spot this conference. Who knew? The addition of Markeith Cummings has definitely turned this team into early contenders. The Batang Pier still have some inconsistency issues to fix, but one thing that doesn’t need fixing is Cumming’s efficiency on the floor. In three games, Cummings scored 37, 23 and 28 points on 70%, 43% and 64% shooting respectively (he averages 58% for the season). That’s an insanely high number especially for somebody that takes the most number of shots for their team. Has Coach Junel Baculi finally found a way to use Globalport’s many threats to his import’s advantage? With a number of shooters effectively spreading the floor and Mercado repeatedly driving and dishing, Cummings has had a relatively easy scoring job this conference.

He may be one of the smaller imports this conference, but Arizona Reid plays with a Pingris-like desire and intensity on the floor that has had Coach Yeng singing him praises. In three games, the former Best Import of the Conference winner has normed 28.3 points, 17 rebounds (7 offensive) and four assists per game. We definitely haven’t seen the best of Reid yet, as Norwood and Chan’s absence has forced him to carry too much of the scoring load, leading to him forcing too many shots at times. His 40% output from the field and 15% showing from beyond the arc are surely products of this.

Surprise, surprise. Could Eman Monfort be this conference’s best feel good story? The 5’7 guard has been given the keys to the Barako Bull offense and has piloted the team well so far. The 16th overall pick is averaging 14.3 points, 3.7 rebounds and 5.3 assists per game while playing with balls as big as a seven-footer. Once he sees an open lane, Monfort attacks without hesitation and when given the chance to bomb away from outside, he’s done so successfully to the tune of 47% from deep. Will teams find something in their scouting reports that can slow him down? I’m sure there’s something out there, but for now, I’m just happy that he’s in the conversation. Emman Monfort has been all over the place for Barako Bull. (Photo Creidt: sports.inquirer.net)

The big Cebuano continues his up and down play. In his 1st game after the Gilas stint, he put up an impressive 12 point, 14 rebound performance only to back that up with a two and four and another twelve and four game. Chances are, Fajardo will usually be the tallest player on the court when he plays this conference, but his lack of motor and intensity allows smaller players to will away rebounds from him. His slow foot speed also leaves a lot to be desired on the defensive end. I desperately want June Mar Fajardo to realize his potential and it’s good now that he has a veteran like Kramer with him to help push him get better day in and day out.

Nope, we haven’t seen a highlight reel dunk from him yet, but what we have seen is solid numbers like his 12 point, 4 rebound, 1 assist, 1 steal and 1 block performance in their opener. He wasn’t as successful in their 2nd game (but, we can call that a wash given how LA played). Moving forward, look for Ellis to stuff the sheets like he has always has.

See above: Best Player of the Conference 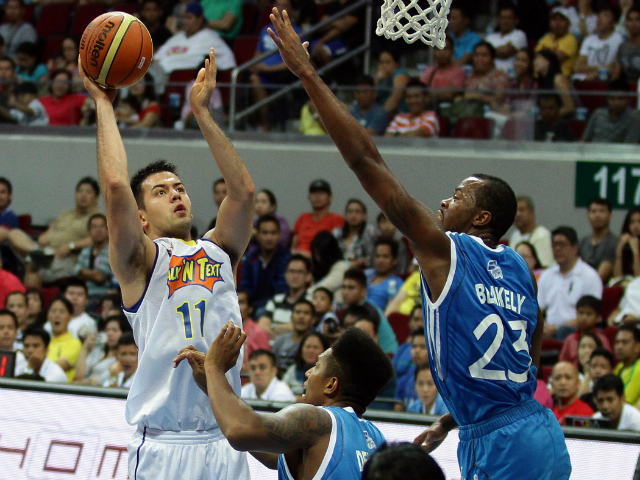 He may need a number of shots, but Sean Anthony’s getting the job done for TNT. (Photo Credit: gmanews.tv)

15.3 points, 9.3 rebounds (2.7 offensive), 1.3 assists and 1 block per game. If you read that, would you think of Reynel Hugnatan? The 10 year veteran has been given a nice opportunity by Coach Ryan Gregorio and has responded by playing his heart out. It’s absolutely fun to watch him play and in many ways, he’s like Calvin Abueva without the flopping and with more hair. I don’t know how he’s getting all those rebounds, but he just finds his way in the middle of the paint battles and somehow tips rebounds to his favor. If Hugnatan continues this kind of play and Hodge elevates his game, then Meralco suddenly has a pretty tough frontline to match up against.

See above: Rookie of the Conference

What do you guys think? Let us hear your thoughts in the comments below!