GIN Team Preview: The Return of the Kings

All Filipino Cup Record: (7-7) 6th place, Lost to RoS in the Quarters

They have a chance to redeem themselves this conference with the addition of 6’10 import Herbert Hill. They also have a new weapon in Mac Baracael via trade at the expense of Alein Maliksi. They also replaced their head coach as Alfrancis Chua will not be calling the shots from the sideline.

For a team that is loaded with superstars, “playing together”  is always the missing link. There were times last conference when they looked unbeatable while there were games where they looked like they don’t know each other. They have arguably the best backcourt in the league in Mark Caguioa and LA Teñorio. When they’re running, nobody can stop them. They are also one of the best rebounding teams in the league. Newcomer Mac Baracael will join Chris Ellis, Elmer Espiritu and Keith Jensen in Ginebra’s athletic wingmen.

Ginebra has a lot of problems chief among htem is stability — they always seem to have a new player every conference. The only holdovers from the last Ginebra championship team are Caguioa, Helterbrand, Mamaril and Wilson. Also, besides Caguioa and Teñorio, no other players averaged double figures in points. Their back-up centers — Mamaril and Taha — are foul prone. Their import, Herbert Hill, who should be a beast inside, is a poor free throw shooter. (Gulp! Vroman is that you?). And there are questions as to whether Alfranchis Chua can lead this team to a title (he’s never won a championship).

Mark Caguioa: He is still the heart and soul of this team. He can still score 20+ points on any given nnight but he knows that if he trust his teammates and share the ball, they’ll have a better chance of winning. When the game is on the line expect Caguioa to have the ball on his hands.

LA Teñorio: He is probably the best court general in the PBA. Aside from points and assist, he’ll provide leadership to this teamand can make clutch baskets. He just needs to realize that he is on the Ginebra now and not on his former team.

Jayjay Helterbrand: Ginebra’s best offensive line-up last conference was with Jayjay joining Mark and LA. Yes, he still needs to adjust to being the back-up point guard on this team. But if when he’s healthy, he can still play well. 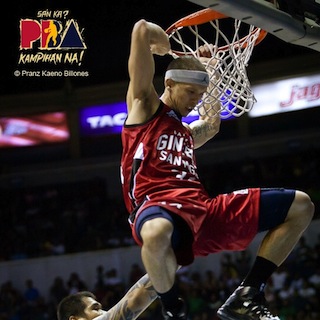 Chris Ellis: Ginebra fans just got another reason to support their team and it’s because of Chris Ellis. Fans see his dunks and acrobatic lay-ups as his only weapon but nobody (I think) realize how great defender Ellis is. He is asked to guard the best perimeter player of the opposing team, day in and day out. He still needs to prove to the league that he can shoot from outside. If he does, that will open up more driving lanes for him to exploit. He also needs to cut down on his fouls.

Billy Mamaril: He needs to be steady and focused while giving their import some breather. He fouls a lot. He can hit occasional jumpers.

Rudy Hatfield: He’s not the same player as hee used to be but he will give Ginebra energy every time he steps on the court.  Hatfield isn’t an offensive threat by any means but his value lies on the defensive end where he’ll dive for loose balls and will be given a task to defend taller imports.

Mac Baracael: He will use the minutes Ababou and Maliksi left. He will provide this team instant offense coming off the bench through his outside shooting.

Willy Wilson: There will be games where he’ll receive DNP’s but when his number is called, he’ll be ready. He can post up smaller and thinner 3’s and provide hustle every game.

Elmer Espiritu: Last conference, Espiritu showed us the type of play that we were used to seeing back in his UE days. You could see the confidence he has in his shots. He makes up to the minutes given to him since Ababou’s injury.

Rico Maierhofer: He’s the most skilled big on this team. He may be thin but he is long and can get those offensive rebounds against bulkier opponents.

Yousef Taha: He is raw but he’ll play with energy.He doesn’t have an offensive game to speak of but he can set picks, block shots and grab rebounds in a limited minutes.

Keith Jensen: He can hit three’s and play good defense.  Unfortunately, he’s the odd man out in the wing rotation.

Kerby Raymundo: Many fans forgot that Kerby is still on this team. Last conference, he spent more time on the bench than on the court. He might still be capable of scoring in the post but he first needs to earn his minutes and play.

Robert Labagala: He’s in the reserve list so barring any injuries, we won’t see him on the court. He’s an energetic guard who can give quality minutes.

Herbert Hill: He’s 6’10 from Providence. He has a little experience in the NBA. He has played for the NBA D-League and other Asian countries. For Ginebra fans hold your breathe, HE IS A POOR FREE THROW SHOOTER.

A Kerby Raymundo trade will happen SOON. Chris Ellis will win the PBA Dunk Contest and Ginebra will make the semis but will fail to reach the Finals.