Game On: Rain or Shine vs. Ginebra

Rain or Shine is currently atop the league leader board with a 2-0 record after dispatching Alaska and Meralco. Next up, they face crowd darlings Ginebra who now boast one of the tallest (if not the tallest) frontlines in the PBA.

The Barangay is coming off a week long break after emerging victorious against San Mig Coffee in their season opener 86-69. They relied on a balanced attack, but outside of Tenorio’s 17 points, most of their firepower came not from the usual suspects as Aguilar (18), Slaughter (10), Ababou (16), and Reyes (10) all got in on the action.

Right off the bat, the Gin Kings tried to make Slaughter a big part of the offense, even to a fault sometimes as they had the tendency to force the action with him even if he wasn’t the best option on the floor. What’s interesting about Coach Ato’s plan for the rookie was that unlike Fajardo who spends a lot of time posting up, Slaughter almost exclusively was featured in pick and rolls. 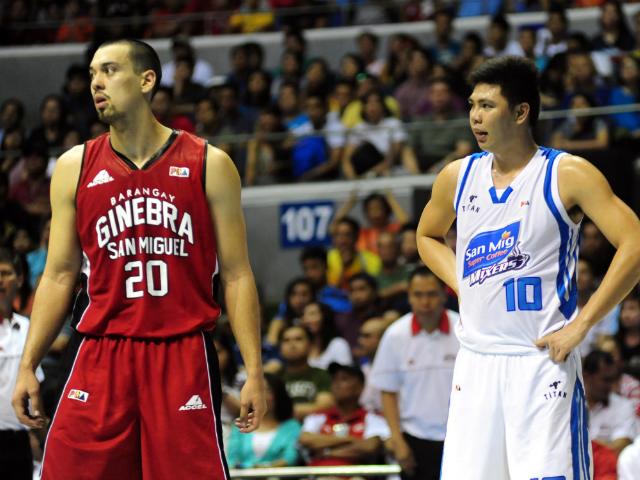 It was a good debut for Slaughter, who finished with a double-double in his 1st game as a member of the Barangay. (Photo Credit: gmanews.tv)

While this wasn’t expected (at least on my part), it actually makes sense since Ginebra is really a team that’s used to attacking from the perimeter, so instead of trying to install new sets to accommodate Slaughter, the coaching staff just dusted off the plays they used with Vernon Macklin and ran with it.

With most people tabbing Ginebra as the team to beat this conference, how should the Elasto Painters play them in order to have a shot at keeping their place atop the league table? We offer our keys to the game:

Rain or Shine needs to keep two things in mind when defending the many Tenorio – Slaughter pick and rolls that will be coming their way.

Fog of War: San Mig Coffee had a lot of success defending against the Ginebra PNRs because they chose to stick the bigger and longer Mallari on Tenorio. Mallari used his physical advantages to bother and cloud Tenorio enough that the Gin-eral had a very difficult time finding open passing lanes, leading to their offense to stagnate or reset with the clock running down. To achieve the same, if not better, results, Coach Yeng should stick Norwood to Tenorio as much as possible in this game.

Initiate Further: Slaughter’s lack of mobility leads him to roll down the lane at a slower pace. His range also doesn’t (seem) to extend out to the free throw area, so it will be important for Coach Yeng to instruct his players to force Ginebra to initiate their PNRs from as far away from the paint as possible. By forcing the play to start from the 3pt line and outwards, ROS will essentially be nullifying Slaughter’s advantage inside (he’s not comfortable shooting from outside the paint and the ROS defenders will have more time to help from the weakside just in case there is an attack towards the basket).

Ginebra has a glut of hyper athletic players that can come out of nowhere to make game changing plays. With the venue sure to be filled with fans of the Barangay, Rain or Shine must make sure that they don’t end up ball watching when their man doesn’t have the ball. The last thing the Elasto Painters need is a missed box out or someone losing his man which will lead to a game changing and crowd charging follow-up dunk off a missed shot.

It’s no secret that Ginebra’s offense goes where Tenorio takes it. If Rain or Shine wants to pull this one out, they will have to hound Tenorio like their lives depended on it. Thankfully, they have one of the PBA’s premiere perimeter defenders in Gabe Norwood, whose speed, height and length should (on paper) give him an advantage in guarding Tenorio.