Game On: Rain or Shine Elasto Painters vs. SMB

Coming off a bad loss in their opening game against Air 21, the Rain or Shine Elasto Painters will go up against the San Miguel Beermen who themselves had a pretty tough outing as well, dropping their first game vs. Alaska. After only grabbing 36 rebounds to Air 21’s 54, the Elasto Painters once again face an imposing frontline with June Mar Fajardo, Ariwnd Santos, Justin Chua and Doug Kramer making up the Beermen frontcourt rotation.

Belga and Fajardo have had classic battles in the past. (Photo Credit: Pranz Kaeno Billones, Sports 5)

With every game carrying huge implications for playoff seeding, Rain or Shine must avoid finding themselves in a 0-2 hole after this game.

Reggie Reginald Williams is arguably the most offensively talented import in this conference. He’s a legitimate NBA scorer as he exploded for 42 points, scoring from all over the court. While he did show some serious offensive skills, there are some who felt that Williams’ defense and conditioning has some room for improvement. 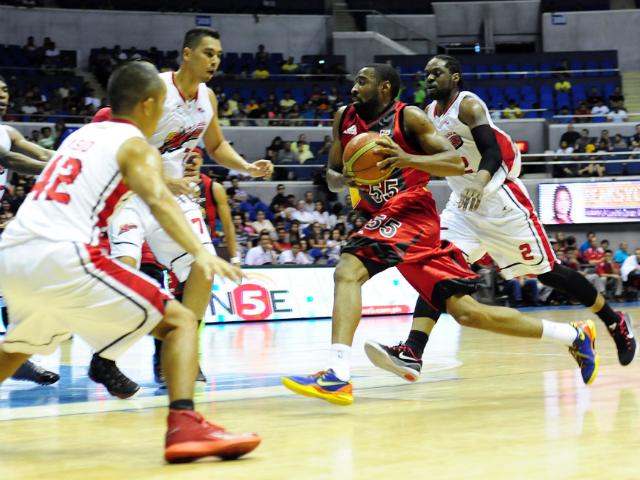 It seems that the Beermen have not fully acclimated their locals with Williams yet and Rain or Shine must take advantage of this. To do this, it will be imperative for the Painters to make Reginald work on the defensive end. With Williams not having much experience guarding post players throughout his career, Rain or Shine should send Belga and/or Reid (assuming San Miguel decides to play Williams at the 4/5), down to the post to tire Williams out and draw fouls on him. An ideal situation for the Painters is for Reid to take Williams (or Santos) into the post with Belga spotting up on the top of the key, maximizing the mismatch with optimal spacing.

On the other side of the court, Rain or Shine must try its best to get Williams out of his rhythm. We all know that the NBA veteran is a deadeye shooter, so whoever is guarding him must make sure that they close hard and effectively to force Williams to put the ball on the floor and get his points off the dribble instead of catch and shoot situations.

Say No to Penetration!

San Miguel Beer employs what could be the best point guard tandem in terms of ability to penetrate and dish the rock. Both Sol Mercado and Chris Ross have, in recent history, led the league in assists Both players are extremely agile with the ball, using their elite speed to take defenders off the dribble before finishing at the rim or finding the open man for an easy assist.

Rain or Shine’s defensive stand will all stem from how they will defend the point. Less point guard penetrations will mean less out of position defense and fewer open threes and easy drop passes for San Miguel. Fortunately, Rain or Shine can put Gabe Norwood to guard the point, using his length and athleticism to hopefully contain the Beermen’s point guard attack.

As mentioned above, the point guard match-up will dectate how this game will shake out.

This is a critical game for both teams as going down 0-2 will make the remaining seven games almost a must-win especially if you want to enter the playoffs with a twice to beat advantage.