Game On: Rain or Shine vs. Meralco

Coming from their very impressive opening day win against the Alaska Aces, the Rain or Shine Elasto Painters now take on a Meralco Bolts team that will be five days removed from absorbing a loss care of a dream debut from Talk ‘N Text rookie, Eloy Poligrates.

Rain or Shine simply played arguably their best game in recent memory last Sunday as they were on point from both ends of the floor, using their active hands and relentless trapping to force the Aces into turnovers if not tough shots. This stingy defense fuelled their offense as they were able to get out on the break early and often, controlling the pace of the contest for three quarters and a half until Alaska played desperation ball from beyond the arc. 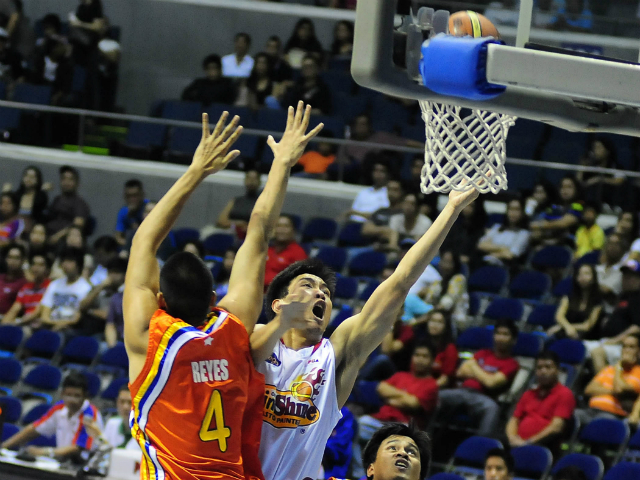 The Meralco Bolts are coming off an off-season that saw them acquire Rabeh Al-Hussaini and Gary David in an attempt to speed up the club’s slow and steady rise to become a member of the PBA’s elite teams. Both players join a team that already feature other notable players in Mike Cortez, Jared Dillinger, and Cliff Hodge among others.

What should Rain or Shine do to gain their very first winning streak of the conference? We offer our keys to the game:

You can be sure that Gary David, Mike Cortez and Dillinger (the three combined to take 57% of Meralco’s shots vs. TNT last Sunday) will dominate most of the possessions of this Meralco ball club out on the perimeter.  The Elasto Painters need to lock the perimeter up and force the ball out of Cortez and David’s hands and make their other teammates carry Coach Ryan Gregorio’s offense.

No defensive possession is complete until the defensive rebound is secured and against the physical and active frontline of Hugnatan and Hodge, the ROS bigs will surely have their work cut out for them. After a really good showing on the boards from Cruz (12), Rodriguez (10) and Belga (9) against Alaska they will surely appreciate the debut of the team’s marquee draft pick Raymond Almazan, whose acumen in terms of rebounding and defense will surely help the team finish up their defensive possessions and own the boards.

The last part of the trifecta will have to be a continuation of the Elasto Painter’s potent transition attack. Despite having very few defensive minded players apart from Dillinger, Hodge and maybe Wilson, Coach Ryan has drilled this team to become a very good defensive team (based on last season’s performance). Given this, Rain or Shine will surely benefit from not allowing Meralco to set up their defense by pushing the ball up the court quick, shooting and attacking without hesitation like they did against Alaska.

Hugnatan will prove to be a tough match-up for the Rain or Shine front line. (Photo Credit: pinoyexchange.com)

Almazan may have missed his chance to go up against Calvin Abueva, but he gets the 2nd best thing in Cliff Hodge in his PBA debut. On the other hand, Belga gets to face another physical banger in Hugnatan. Both frontcourts will surely be crashing the boards hard and don’t be surprised if things get heated midway thru the game. With the battle of the boards a very big key to winning this game for both teams, expect the pair that gets intimidated to be one step closer to a loss without the game not even being finished yet.