Game On: Rain or Shine vs. ALA

What should Rain or Shine do to book their first winning streak of the season and grab a 3-3 record? Let’s check the keys of the game.

Rain or Shine has had trouble in their rebounding this conference, especially against bigger or quicker front lines. It’s a difficult balancing act for Coach Yeng as one of his better rebounders in Almazan often gets taken advantage of by opposing imports on defense.

It may not be as evident when we look at the numbers outside of the Air 21 and Barako game, but Rain or Shine really has to do a good job of rebounding the basketball. There’s no reason for this team to give up 18 and even 24 (8 to Eric Wise) offensive rebounds to any team. Giving up offensive rebounds means not being able to finish defensive possessions, extra opportunities for opponents and more importantly for Rain or Shine, a lost chance to get out in transition.

It definitely won’t be easy, as Alaska employs arguably the toughest frontcourt in the league with Walker, Thoss, Abueva, Espinas and Manuel all accustomed to physical battles in the post. Belga, Reid, Cruz, Almazan, Rodriguez and Ibanes definitely have a lot on their plates in this one. (On a related note, it’s funny how Alaska’s entire frontline are perfect Yeng Guiao guys). 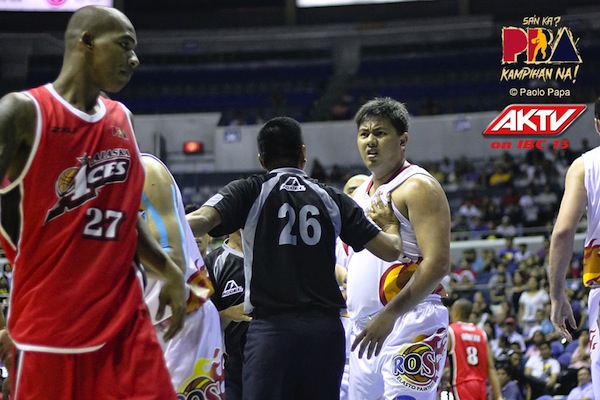 Big Beau has to come up big for the Elasto Painters. (Photo Credit: Paolo Papa, Sports 5)

Henry Walker is not gun shy, this conference, he averages 19 shots, including 6 attempts from beyond the arc per contest. After five games, he’s shooting an impressive 53% from inside the arc and 27.5% from distance. However, after shooting 3/6 from three in his first game, he’s just made one trey in each of his next four games. Trusting that this is the norm for him, Caoch Yeng should structure his defense to give Walker that three point shot.

Limiting Walker’s forays into the paint will also limit his role as facilitator in Alaska’s offense. His nine assists per game keep the Aces’ triangle flowing and taking away his role as a post playmaker will go a long way in grinding Alaska’s offense to a halt.

This one’s going to be tough, but I feel that the Elasto Painters are due for a great defensive game and will be able to do just enough to get the win and be one step closer to ensuring that playoff berth.