Game On: Rain or Shine Elasto Painters vs. AIR

The Rain or Shine Elasto Painters are coming off yet another successful run in the recently concluded Commissioner’s Cup, coming one win away from another finals berth. Since busting thru with Jamelle Cornley in the 2012 Governor’s Cup, the team has continued to put together strong playoff runs, leading up to this conference where they have kept true to their team’s history of continuity and building from within by bringing back Arizona Reid, an import familiar to all Rain or Shine fans.

With a proven import and the team intact, would it be safe to assume another strong run for the Elasto Painters this conference? We take a deeper look below.

Rain or Shine has always been known for their run and gun style of play, with Coach Yeng imploring his boys to attack in transition every chance they get. They’ve consistently been a top three team in terms of pace and in fact led the league in the statistic last conference at 94.6 As expected, they also led the league in defensive rebounds (36.6 / game) and finished 2nd in field goal attempts (83.2 / game).

Despite playing fast and getting a lot of opportunities the Elasto Painters averaged a below average ORTG (98.5) last conference. They were in the middle of the pack in terms of FG% and ranked second to the last in FTAs, averaging only 23 charities per game and making only 75% of them. Clearly, the transition from McLean to Chism midway through the conference affected team’s performance, but the better performances from locals who shot poorly from the field last conference like Norwood (35.2%), Chan (39%) and Cruz, (39.6%).

In his last tour with the Elasto Painters, Arizona Reid averaged a monster 30.4 points, 14.0 rebounds and 4.1 assists in 38 minutes of play. Reid comes in as one of the offensively complete imports, with the ability to score from both inside and outside. His familiarity with the PBA brand of physicality allows him to consistently get to the line, where he averaged eight attempts per game in his last tour with the team. With the Rain or Shine team largely intact from last year, expect Reid to come out strong from the gate, with the possibility of putting up monster scoring outings at any given night.

Being a constantly successful franchise does have its downsides. The deeper a team’s run into the playoffs, the less rest they get before the next conference/season starts. Coming into this conference, the jury is still out on the health of JR Quinahan (meniscus), Chris Tiu (MCL), Jervy Cruz (MCL) and Paul Lee (Cliff, Chris), while Gabe Norwood, Jeff Chan (and to an extent), Beau Belga have all continued to sacrifice their bodies for Gilas Pilipinas.

Despite everything looking good on paper, I do get the feeling that this team is already looking forward to the end of the season for some must needed rest and relaxation. With the resurgence of teams like Air 21 and Barako Bull, expect the Painters to struggle to nab one of the top seeds this conference. I expect them to enter the playoffs somewhere around the 6-8th seed and will have an uphill climb to upset the higher seeds.

Rain or Shine will be opening their conference on Tuesday against the resurgent Air 21 Express, who have brought in a legitimate post presence in Allen Durham to shore up their aged (but still effective) frontline.

With Durham and Taulava manning the paint for the Express, the Rain or Shine frontline will be challenged to continue to dominate the defensive rebounding end of the glass. Belga, Quinahan, Reid, Cruz and Almazan must all play their parts in stopping what looks to be the most imposing forward – center combo in the league this conference.

Despite a plodding center in Asi Taulava playing heavy minutes, the Express did rely heavily on their transition attack to surprise opponents. Last conference, they led the league in fast break attempts and placed 2nd in transition points with 10.7 and 14.4 attempts and points respectively. With players like Yeo, Cardona, Anthony and Poligrates, Air 21 is more than capable of running opposing teams off the court. To win this game, the Elasto Painters must not allow Air 21 to get out in transition. This would mean making sure that at least three out of the five players on the floor get back on defense immediately after a shot is put up, while always putting a man on the ball to slow down the Express attack. 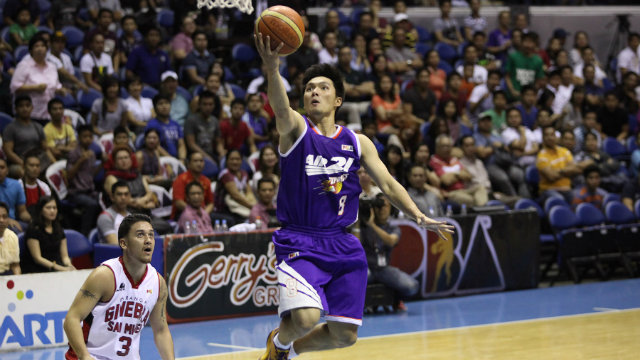 Joseph Yeo and the Express must not be allowed to get easy baskets (Photo Credit: Rappler.com)

Jeff Chan does not need to outscore Joseph Yeo in this one. Instead, Chan will need to do his best to keep the Ninja in check. Coach Yeng can easily put another defender on Yeo, but that might lead to extended bench time for Chan, whose range is needed by Rain or Shine to help spread the floor for Reid to be more effective and he will need to not be a liability on defense to be able to do so.