The Falcons now find themselves at a crossroad, they can either:

a) Play like the contenders they claim they are; or

Whichever they choose, they are going to live with it for the rest of the season.

Looking up at six other teams, the Falcons are in a two-game hole that could get even deeper if they don’t get their act together. They have to forget that they barely escaped with the win in their last meeting. NU is a whole different beast from what it was in round one and Adamson has shrunken in terms of power since then. Even with a determined Bobby Ray Parks Jr. leading the charge for NU as well as the high of drawing first blood on FEU’s seven game streak, Adamson still has the weapons in its arsenal to tame the Bulldogs. The question is, “Are they willing to use them?” 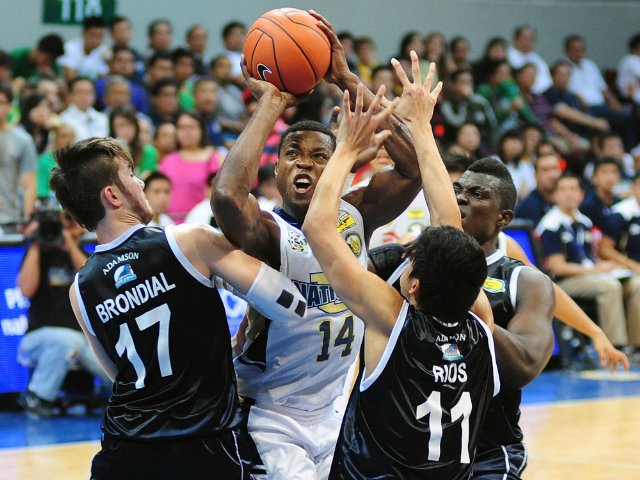 Can they lock NU’s offense up like this, again? (Photo Credit: KC Cruz, GMA News Online)

Even if he didn’t put up his typical numbers against FEU, the reigning MVP is still due a breakout performance. Bobby Ray Parks Jr. is not only a deadly shooter from beyond the arc but also a crafty playmaker who can create space for either himself or one of his teammates. Just like in their first game, Adamson has to work on denying Parks the ball on offense. Sure, he shot 2 for 11 in their win against FEU, but that doesn’t mean he’s going to shoot the same percentage when he gets good looks at the basket. Count on Harry Petilos or Gian Abrigo being assigned to Parks, hopefully one of them can stay in front of him well enough to prevent him from getting any kind of rhythm.

Play him or bench him, Coach Leo has to decide what he wants to do with Sewa. In their last game against La Salle, Sewa went missing. Brondial got his monster stats picking up the slack left by Sewa who only scored once and grabbed a measly (compared to his usual 10) four rebounds. If Sewa is getting boxed out and acting like a wandering soul again on the court, the best thing for the Falcons would be to sit him down and let somebody else get a crack at it. What Sewa brings to the court more than anything else is his imposing presence down low. Passes are disrupted by him just standing in the post because of his size. It’s easy to see why Coach Leo would want to keep him on the floor, but when he’s reluctant to bang it out in the paint because of his bum shoulder, I think it’d be enough reason to change him up for someone who will. Adamson has to be decisive, use it or lose it, they can live with or without him, they just can’t be fickle about it.

Eyes on the prize, boys! One measuring stick for focus is free throw shooting. My favorite example is their September 10, 2011 game. Throughout the season, they were just as erratic from the charity stripe as they are today, but for one game, that single game in which they poured every ounce of focus they had in them, they were perfect. Missing one or two in this game will be okay, but for certain their free throw figures have to be at least on the high seventy percent to show that they mean business. For two games, they could have iced the game had they only made more free throws, to see this fact and not do anything about it is a great bit of negligence on their part. Against FEU, they missed 13 out of 22 free throws in a game they lost by three. Against La Salle they missed 14 out of 30 free throws in a game they lost by only one. Clearly, had they shot better from the line, those games would have been a totally different story.

Falcons have to commit to their scoring wherever they choose to score from. (Photo Credit: KC Cruz, GMA News Online)

I’ve always known Coach Austria as a cool, calm and collected coach, until his players start messing it up, then he goes berserk in an attempt to inspire some desperation in his boys. For some reason, desperation is good for the Falcons. Whenever it seems they are in the brink of losing something big, they always choose to go down swinging. Sometimes they win, sometimes they lose, but they just keep swinging for the fences anyway. A bit of this mentality would be nice. In the first three games of the season, Jericho Cruz was able to score within the first minute of each of them. This set the tone for his team, at least for the first half of each game.

A sign of this pushed-against-the-wall play is how they rebound on the floor. Early in the first round whenever they played big teams like NU, UST or UE, the rebounding numbers were better spread out. Brondial and Sewa had their 10 a piece while Cruz, Julkipli, Rios and the rest would have at least four or five boards each, most of them offensive boards. As guards and small forwards they aren’t really tasked to chase down boards, but when they do, it shows they are doing everything they can to help their team.

In their last game, Brondial got 23 rebounds, but Sewa only got four while the closest to his number was Trollano’s 8 followed by Cabrera’s 3. Cruz got a single rebound that game. The vacuum in rebounding showed how they just relegated rebounding duties to Brondial, possibly thinking, “meh, he’s got that covered.” While it’s good that Brondial was that dominant on the boards, it was disappointing to see how little the others did to help.

One of the biggest contributing factors to their recent loss was their indecisiveness on the offense. Cabrera passing to Trollano, Trollano passing back to Cabrera, Cabrera to Trollano until finally the shot clock just expired. What the Falcons choose to do against NU has to be done with conviction. To quote Yoda, “Do or do not, there is no try.” As to why this is important, I give you Mr. Miyagi, “Walk left side road, safe. Right side road, safe. Walk middle road *squish*.”

Of course they have to make the right decisions too, but they have a great mentor to guide them to what that is, so making up their mind is the more important key. NU’s defense will try to force them to second guess their set plays, but when Cabrera comes off that curl past two screens into the top of the key, he should not hesitate to pull the trigger once the ball lands in his hands.

The Falcons have lost three straight, the most they have lost in a row since Season 75. To lose another game will mean they go deeper into the standings and run the risk of repeating their 3-11 finish last year. There has to be a sense of urgency in them somewhere, telling them that now is not the time to style and profile.

It’s not yet too late to  turn their boat around, but NU will definitely give them a tough time turning that wheel. To stay alive they have to fight, and that’s all their supporters can hope for really.

While they might not need to match their season 73 record of 9-5 which got them into the Final Four to make it this year, they still need every win they can get, including this one if they’re going to keep their hopes alive.

Coach Leo always says, “Walang masamang tinapay sa UAAP (There are no stale breads in the UAAP).” So his boys had better prove him right and not become the first to stale.