After a Jekyll and Hyde performance against UST, the Soaring Falcons will look for redemption against the very team that booted them out of the Fil-Oil Tournament months ago. The Tigers have already exposed how raw they are at the point guard position and they will be facing one of the best floor generals in the league today in Roi Sumang.

These two teams have been dubbed “best of friends” by their fans, including one Facebook page named “AdUE”, devoting themselves to updates about both universities and keeping their friendship alive and public. Their last encounter in the UAAP, however, wasn’t so friendly as the Falcons put up their Season 75 swan song against them in a 30 point rout that allowed captain Eric Camson one last great game before ending his college hoops career.

The Warriors are coming off their heroic trumping of NU while the Falcons will need to shake off the disappointment from their last game. Momentum is on UE’s side but determination is with AdU.

The Falcons defense has to stick on the opposing point guard like the rice delicacy his name turns into sans “g”. Not only did he hit the winning three pointer and free throw against last year’s host, he also led them in scoring with 19 points. In the Fil-Oil tournament, Sumang tore the Falcons defense apart, scoring nearly at will at each possession. If the Falcons stand a chance at winning, they have to defend him well if not stop him. 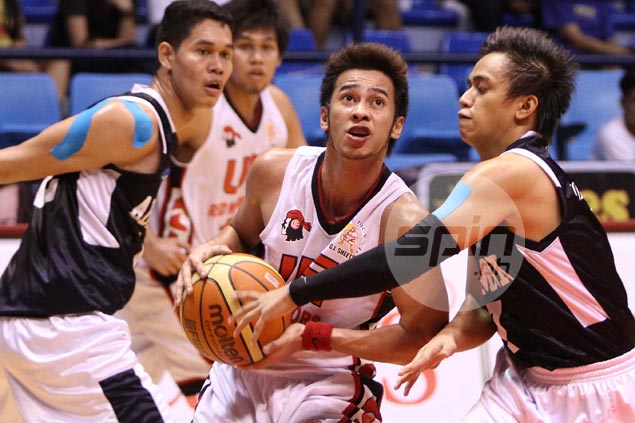 Who can forget how UE’s newest import Mammie wrote “Kill” on his left sneaker and then “Sewa” on his right during their last meeting in the Fil-Oil tournament? In that game, UE was successful in doing so, limiting Sewa’s touches and frustrating him to the point that Ingrid’s big grin turned into giant eyebrows of frustration. Adamson has to return the favor and limit Mammie’s boards, especially on the offensive glass. Mammie got 20 rebounds in their last game against NU, most of which (13) were offensive rebounds! Sewa and Brondial have to dominate the post and continue to deny their opponents second chances while getting their own. 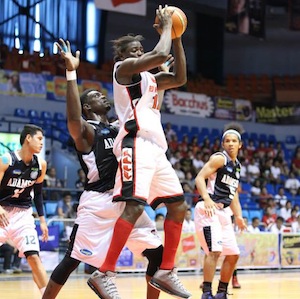 According to the broadcasters, UE likes to run- and why wouldn’t they? They have arguably the best point guard in the league in Sumang who can hit their shooters on the fly. Adamson, while notable for its suffocating defense, needs to setup its defense. If they are going to defend the Warriors’ charges, they need to speed up their transition defense, which means staying on their tippy toes at all times. It also means limiting turnovers and not falling in love with the jumper. If they play smart, they can prevent the running game and take control of the tempo.

Remember how UST forced them to 22 turnovers in their last game? They can’t let that happen anymore. UE will likely run a press on the Falcons at some point in the game and the Falcon guards can’t let that get the best of them. Axel, Ar-rauf, Ryan and Maui have to keep their poise under the pressure while the others have to make their shots in a hurry in order to release some of that pressure on their floor generals.

5. Fire in all cylinders

There’s no time for being conservative in this game, UE won’t let up an inch and neither should the Falcons. Roider Cabrera, Harry Petilos and Don Trollano have to stay confident in their shots and not worry about letting them fly. Jericho Cruz might want to think twice about doing the same.

It will be a game of back and forth runs between these two teams, whoever can make more shots will definitely win the game (a duh?).

UE might have arguably the best point guard in the UAAP right now in Roi Sumang, but the Falcons still have Cruz. While Sumang has proven himself to be respectable from long range, shooting a respectable 2 of 5 from beyond the arc in their last game, Cruz will give the UE frontline nightmares as he will look to attack the rim with his reckless abandon as always.

It will be a game of runs and someone will run away with this game. If the Falcons can manage to hold off the UE blitz and show off some scoring muscle of their own, they can come away from this game with a decent, though not large win.