Game On: Adamson vs NU: Round 1

Just like after their let down against UST, the Falcons are again looking for a bounce back game, but this time it will be against one of the top contenders for this year’s crown. The NU Bulldogs are also coming off a loss and will be looking to get back in the .500 column after getting gored by the hot streaking Tamaraws. It will be a fight to get out of the hole, one that will depend on who can get back on their feet first.

There can be no MVP performances on either side for the Falcons to win this. That’s right. The Falcons stand a better chance of winning when Jericho Cruz doesn’t use as many possessions, while the Bulldogs absolutely need to run their offense through Bobby Ray Parks Jr.

Adamson has beaten teams while going to Cruz 30% and has also done the same going to him only 27.7% of the time.

NU has only won whenever they fed Bobby Ray Parks Jr. the ball more than 30% of the time (except against UP).

The Falcons have to prevent Parks from attacking the rim and having an MVP game (Photo Credit: Roy Afable, InterAKTV)

Now, you’re probably thinking, “But they won against UP with him using only 25.9% of their possessions.” Correct. But that’s UP.

The type of offense both teams rely on are very different, that being said, Parks is a do-it-all type player. He hits the three, drives, does layups, runs the fast breaks and so much more – that’s why he’s the MVP. Cruz on the other hand is a slasher and a close-to-the-basket scorer. He doesn’t shoot well, which means he has to rely a lot on his teammates in spreading the floor.

Based on these numbers, we can see that NU stands their best chance at winning if they go to Parks more often in the game. Adamson on the other hand needs to keep the ball moving and not let Jericho Cruz take too many shots (especially long range ones).

If Adamson wants to win, they have to stay away from playing MVP basketball and not allow NU to do it too.

NU often runs a half-court set similar to a five-out (if it isn’t already one). This means Parks or whoever has the ball will often be driving in the lane looking to kick the ball out to a shooter at the three point line. The Falcons have to recognize this and time their defense just right. Of course they can’t let off the pressure in the paint, but it means they can’t just collapse and let it be. NU will force their heads to swivel and they should be ready for that. Collapse in the paint while contesting every shot should be top priority on defense. The only person who should be allowed to shoot uncontested shots from outside is Emmanuel Mbe (but not too much, ok guys?).

Coaches will always say, “Force someone else to beat you.” The same goes for this game against NU. The Falcons must force the ball away from NU’s two key players- Parks and Mbe. This means easing off players like Villamor or Javillionar  in areas other than the mid-range. Chances are, if NU will score off those players off those areas, it won’t come very often. Mbe will face heavy opposition in the paint against Sewa, so guarding Parks will be the bigger problem. Possibly Harry Petilos or maybe Jansen Rios should be on him, definitely not Jericho Cruz as Cruz likes to gamble too much on defense, which Parks will likely make him pay for.

The Falcons got burned in their last game for not executing their sets properly. They put up too many contested long range bombs and settled for too many jump shots. They made only a quarter of their long range shots that game, forgivable if the total number of outside shots didn’t nearly equal the number of inside shots they took (32 3 point FGA; 37 2 point FGA). They have to go back to what allowed them to break their game against UE wide open and attack the rim. This means more feeding Sewa, more driving from Cruz, more screens from Brondial and a lot of off ball movement from everyone else.

Like the Sewa-Abdul matchup, this one will come down to pure brawn against veteran smarts. Mbe was able to take apart UP’s front court, juking and jiving in the paint while Sewa did the same through his brute strength. The amount of points and rebounds that these two paint behemoths can get will spell the difference of their team leading by a few or trailing by a mile. Both of them average around 10 points and 10 rebounds for their teams, in a league that averages 60 points and 40 rebounds a game, that’s nearly 1/5 of all the points and ¼ of the rebounds on a single player against 19 others. Expect Sewa to push his way into the paint again while Mbe will try to contain him. 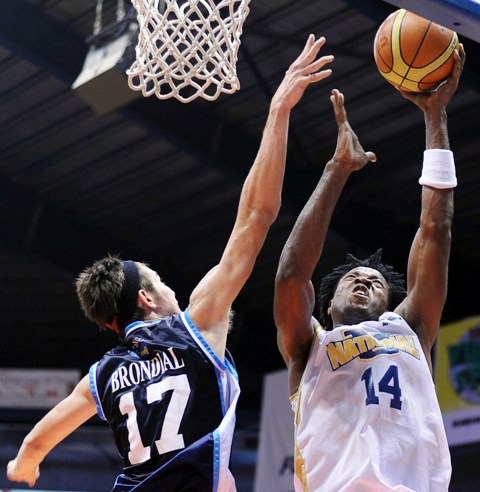 Mbe will face new opposition in the paint as Sewa will be there to stop him for the Falcons (Photo Credit: KC Cruz, GMA Online)

Both NU and Adamson are coming off losses. The Falcons need this game to bounce back again and to erase the doubt generated from their loss to Ateneo. Adamson is the more well rounded team, since they have scoring options other than Cruz. I’d chalk this up for Adamson, but that’s if they learned their lesson.