Game On: Adamson vs. De La Salle, Round 1

After escaping by the hair of their teeth against NU, Adamson has no time to rest on their laurels until the end of the first round. Yes, round one is almost over but the teams that stand in their way are itching to send them sore and sorry before the break.

This green team has had its late game melt downs in previous games, but that doesn’t mean the Falcons should or can count on it happening again in their game.

The Falcons have to keep the game close. True, no lead is safe in the UAAP, but Adamson is hardly the team to overcome such a big deficit. They’re more used to dishing out the damage and breaking away, but even that is dangerous.

This season, the Falcons have not won a game after being down more than 5 points going into the fourth quarter. While they have won their other games, Adamson has allowed their opponents to catch up to them in the fourth quarter, luckily they built big enough leads or found just enough fire power to hold them off in the long run.

In the only game (against a team that now has at least one win) which La Salle won, Jeric Teng posted only 13 points, but he had a 31.4% USG rating for La Salle but only having an eFG of 35.3%. The rest of his team had much better field goal effectiveness but not as many touches.

So allowing Teng to hog the ball all of the time while keeping the ball away from his teammates will mean La Salle will have a very difficult time scoring since he will likely make only 35.3% of his field goals. Sending him to the line won’t be that big a worry either as he is notorious for missing horribly at the freethrow line, especially when it counts. He made only 1 of 7 in one of their wins. 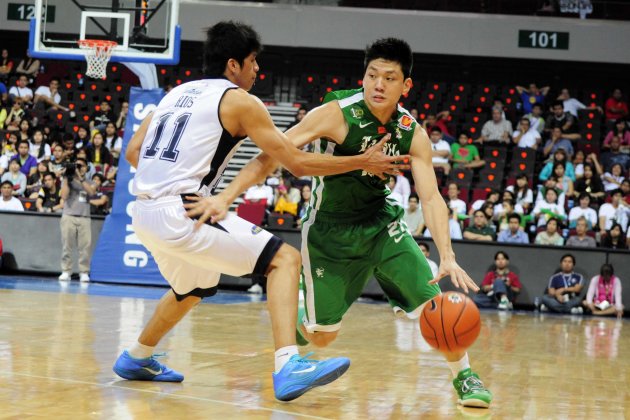 Teng hasn’t been producing efficiently, so Adamson has to force the ball to him and make him force bad shots up. (Photo credit: NPPA images)

Adamson has two of the top 10 rebounders in the UAAP in Ingrid Sewa and Rodney Brondial while La Salle only has Norbert Torres in the top 10 rebounders. This will eliminate second chances from all those Teng misses. Not allowing La Salle to get good shots while denying them the rebound further tightens their grip on La Salle’s already struggling offense. 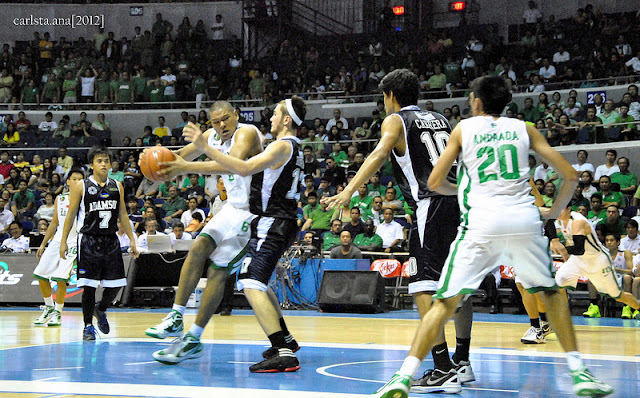 Torres will be the lone strong rebounder against Sewa and Brondial (Photo credit: Carl Sta. Ana)

Jericho Cruz will be able to have his way in the paint this game as La Salle doesn’t have many shot blockers to stop his drives. Teng will have a very difficult time against Adamson’s defense, with fast and tall defenders such as Harry Petilos, Jansen Rios or maybe Gian Abrigo guarding him, we might expect his eFG to drop even lower. Whichever one of these two scorers can have their way on the offensive side will bring the win for their team.

Unless La Salle can come up with an insane three-point performance from Almond Vosotros and Thomas Torres, or if Adamson decides not to defend at all, Adamson can stomp this game with ease from up close to the basket.