Game On: De La Salle Green Archers vs FEU, Round 1

The 77th season of UAAP is finally here!

And while we are it, they’ve been generous to treat us a battle between two potential Final Four contenders in De La Salle Green Archers and Far Eastern University Tamaraws. This is it! All the X’s and O’s, the summer trainings, FilOil Pre-season tourney, all that the teams have been waiting for.

Three things that we think, should be the deciding matters of the main set of the opening day are as follows:

La Salle was one of the leading rebounding teams in the UAAP last season. It’s hard to keep the gigantic frontline of the Green Archers off the backboards so winning this category is one-third of the battle done. FEU allowed La Salle  its best rebounding games in their matchups last season. In the first round, they let the Archers collar 52 boards to their 51, and in the next encounter, a huge 59-36 cleaning edge.

It’s no secret that La Salle is one of the most horrid shooting teams out there with only three players hitting at least 40 percent from the field. So how do we see the Green Archers this season? Should they be better or a lot worse? The offseason should have cured the jumpshot-happy offense of Jeron Teng and Almond Vosotros and the two should have worked on their driving games and even those small, easy pull-ups in the paint. As for FEU, while Terrence Romeo was a known chucker, Mike Tolomia was worse, shooting somewhere around the 30 percent range. Mark Belo has to stay razor-sharp for the Tams to keep up in what I think will be a brick-laying game. 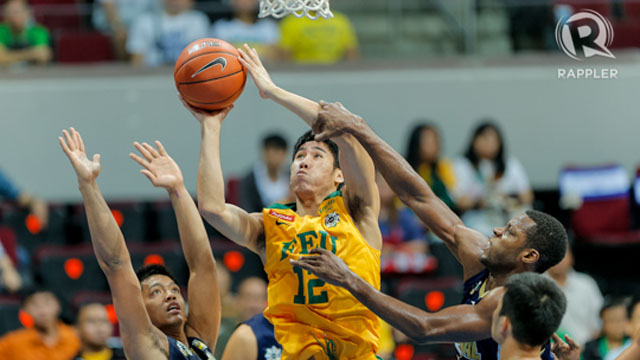 Matchups will play a key role here since there are a couple of two-way players who should be up each other’s grill all day long. Those two are Mac Belo and Jeron Teng. Belo has blossomed after a surprising initial campaign last year. He was a nightmare being able to play four while also quick enough to slide down to the three and cover other small forwards. That’s a boon to have if you are Nash Racela. Teng meanwhile, for a three, is bull strong which allows him to take it to weaker power forwards to make up for the height discrepancy. The only knack on the King Archer is that he cannot make free throws on a consistent basis in the eliminations. It is also imperative to note the matchup that Anthony Hargrove and the comebacking Russell Escoto have on their plates: Norbert Torres, Jason Perkins, Matt Salem, Arnold Van Opstal, Prince Rivero, and Abu Tratter. Those kids are big. Too big.

The X-factors here are Tolomia and Vosotros. If they are not building a new condominium, boy we are in for a firefight. They can each tip the balances for their team’s favor. Also, how Russell Escoto performs is considered a question mark. The kid was great in spurts providing energy, rebounding, and shot alterations. After an injury that may have limited his explosiveness, it remains to be seen how effective he can be.