Finals On: Rain or Shine vs. SMC

Familiar foes meet once again as the Rain or Shine Elasto Painters meet the San Mig Coffee Super Mixers in the 2014 PBA Governor’s Cup finals. The Elasto Painters continue their consistent and successful run ever since the 2013 Philippine Cup, while the Super Coffee Mixers go for a historic grand slam and their fourth title in a row.

Let’s take a look at the build-up to this series that will surely be one for the ages:

In a “non-bearing” elimination round game for both teams (since their quarterfinal berths were already secured), Arizona Reid buried a baseline jumper with 1.1 seconds left to push ROS over SMC 95-94. This game didn’t show us much, but it did reinforce some statistics that could shape this series.

Rain or Shine Will Lose the Rebounding Battle

Against SMC in the elimination round, ROS got out-rebounded 60-41, including giving up 25 offensive rebounds. This has become a consistent theme with ROS this conference as they allowed 52.4 rebounds per game, worst in the league.

This is somewhat expected given ROS is the PBA’s perennial leader in terms of pace (the number of possessions the team has over a ball game). Leading the league in pace (93.9 after the elimination round), means that the team had more scoring opportunities / shots at the basket and thus more possible rebounding opportunities for opponents. What is a concern however, is the amount of offensive rebounds the team gives up… and this is where ROS finds itself struggling.

Against Alaska in the semifinals, the Elasto Painters gave up an average of 16 offensive rebounds per contest, higher than the elimination round league average of 14.7 offensive boards per game. Add into this equation SMC’s second ranked ORB% of 34.4 percent and ability to rebound across their entire lineup may just be too much to handle for ROS.

The Rain or Shine frontline will have their hands full vs. SMC. (Photo Credit: solarsportsdesk.com)

Turnovers, Thefts and Transition for Both

Here’s how ROS finished the elimination round

Everyone expects this from the Elasto Painters. They swarm on defense and their fresh legs are able to force a lot of turnovers that they quickly convert to fast break attempts and points.

Let’s now take a look at how SMC did in the same categories.

Who would’ve thought that SMC would essentially be Rain or Shine-lite in terms of this style of play? It’s true that the Triangle is a slow it down, half court system, but Coach Tim has clearly taken advantage of his team’s long and athletic players to create mismatches and have also given them the freedom to run and score easy baskets.

Live and Die by the Three

Here’s how both teams shot the ball from beyond the arc after the elimination round:

It’s clear that one team prefers to shoot the three ball more than the other and shooting beyond the arc could possibly decide the outcome of this series. This has the makings of a fun chess battle between Tim Cone and Yeng Guiao as ROS will try to force SMC into taking threes while SMC does the opposite. ROS should welcome a looser interior defense, but they should not completely abandon the trey as this is one of the pillars of their offense. A good three point shooting game by ROS could allow them to steal one of the three wins needed for the championship. On the flip side, while ROS would be happy with SMC shooting from beyond the arc, special attention must be paid to Allein Maliksi (40 percent), Joe Devance (33 percent) and PJ Simon (38.5 percent) as they are SMC’s only consistent shooters this conference. 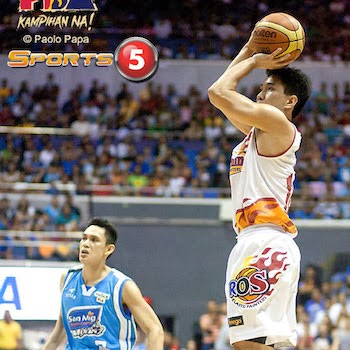 ROS shooters like Jeff Chan need to get hot for multiple games if ROS wants to add another trophy to their collection.

If there’s one Achilles ’ heel to this SMC team, it will have to be their ability to shoot free throws. This conference, the team has shot only 170 of  268 or 63.4 percent from the charity stripe. While ROS should force SMC out to the perimeter, fouling them hard and forcing them to make their charities should be the order of business if the Mixers get inside.

There’s no denying that Rain or Shine are the underdogs in this series. Coach Tim Cone will most likely slow the game down and limit ROS’ transition attack. The Elasto Painters should be able to steal a game by shooting lights-out from the perimeter, but SMC should be able to take care of this series in four games.

I sure hope that I’m wrong.