Falcons succumb to UST in game of two halves

(A Tale of Two Cities, Dickens)

A distraught Rodney Brondial could do nothing but scream at his teammates while UST faced its crowd to sing their school hymn. “Panalo na diba!? Nakakahiya sa kanila!” (We had it in the bag! It’s such a shame!) Why wouldn’t he? His team built a 10-point lead at halftime only to see it dissolve before their eyes toward the final buzzer. Even before his teammates realized they were missing their valuables, the veteran Falcon center already knew they had been robbed. 67-62, UST took the victory from right under their noses and all they did was watch.

It was as if there were three games played that afternoon, NU vs. UE, UST vs. AdU-A and UST vs. AdU-B. Like in their last game against UST in Season 74, Coach Leo wished games were 20 minutes shorter. Different teams stepped onto the court each half as Adamson opened up the game attacking the rim with drives from Jericho Cruz, Ar-rauf Julkipli and Ingrid Sewa. They finished the first quarter with 22 points while allowing only 18 from the Tigers. The second quarter saw the Falcons flexing their muscle as Roider Cabrera opened the quarter with a three-pointer followed by a put-back jam by Sewa. This allowed them to build a 34-26 before heading into the locker rooms for halftime.

But upon switching courts, so did their fate. After opening the half with a fastbreak layup by Cruz, the Falcons were simply parched for points. Only Brondial and Cabrera would score for them in the third quarter while UST put up a scoring run that stole the lead from them 45-41 going into the fourth quarter. The Falcons play catch up the entire fourth quarter as they see the opponent’s lead grow to 12. Back-to-back three pointers from Don Trollano finished by a Cabrera trey capped off a 9-1 run with time running down to bring the Falcons to as close as two points. But MVP candidate Jeric Teng hit the nail in the coffin with 11 seconds left to end this tale of two halves.

Reviewing Keys to the Game

1. Battle of the Boards

The Soaring Falcons out-rebounded the Tigers, 52-39, with 21 offensive rebounds. They failed to capitalize on their second chances getting only four-second-chance points. The Falcons may have won this battle by a lot but it didn’t help them in the end.

He still hasn’t found his “J!” He tried to look for it in the second half, oh boy did he try… but it would not be. The first half saw Cruz getting to the paint like he should. Through these attacks to the basket the Falcons were able to rack up as much as a 10-point lead over the Tigers before the halftime break. It all fell apart when the Tigers tightened their penetration defense and forced Cruz to search for his “J.” He tried, and tried, and tried, but unlike Little Bo Peep who lost her sheep, Cruz’s “J” simply didn’t return. The Tigers defense ended up forcing him to only 15 points on 6 of 18 shooting from the field as he missed all of his five attempts from beyond the arc.

UST  slapped on a press in the third quarter which put the Falcon point guards on their heels. From committing 10 turnovers each in the first half, the total for the Falcons escalated to 22 at the end of the game while UST’s slightly grew to 14. This is what allowed UST to come back from the eight-point hole they were in by halftime.

At the first half, the Falcon point guards were doing a great job of exposing the Tigers’ lack of ball distribution, forcing big man Karim Abdul to resort to long-range bombs to get his shots. The second half was UST showing the Falcons how much they miss Lester and Jerick, pushing around rookie Axel Iñigo to several turnovers which they readily pounced on.

While AdU had a wealth of point guards, their rawness opened up the opportunities for UST. All the Tigers needed to do was press them with their size and force them to cough up the ball. While they couldn’t catch a break on the half court set, the Tigers made do with fast-break opportunities they forced. 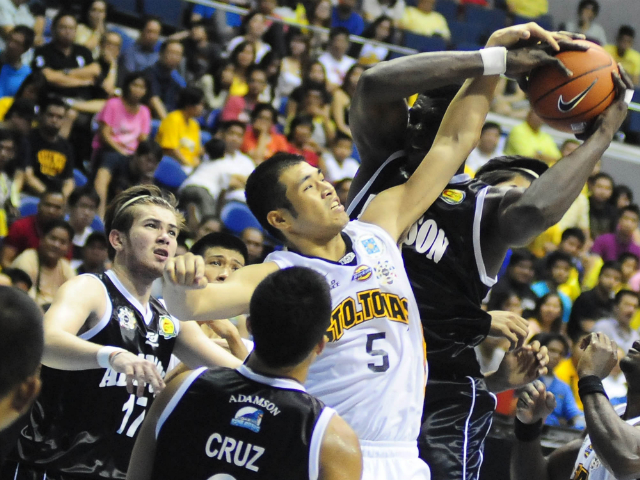 Ingrid Sewa trying to force it in the paint against UST defender Kim Lo, getting 13 points in the first half (Photo Credit: KC Cruz, GMA News Online)

Battle of the Behemoths!

Ingrid Sewa evidently was able to frustrate Karim Abdul. The UST big man was so frustrated he resorted to long-range bombs since he couldn’t post Sewa up.

Veteran poise won the game, however, as Sewa racked up 13 points in the first half, only to never make a single basket coming out of halftime break. Abdul who had only two points on 1 of 9 shooting in the first half-finished with six points. Yes, not a lot, but it meant that he actually played meaningful minutes in the second half. Not to mention his team didn’t need him to score as Kevin Ferrer gunned down the Falcons with 17, Teng with 15 and Bautista with nine.

As the same angry Rodney Brondial said to his teammates, “Lamang tayo ng 10! Nagkanya-kanya lang tayo. Hindi tayo mananalo niyan pag puro tayo ganito. Hindi na ito pwede maulit!” (We were up ten! We were so selfish! We won’t win if we keep doing that. This cannot happen again)

While this game exposed how raw the Falcons are as individual players, it also showed how well they work as a team. They are their greatest foe and this game just showed it. They fell in love with the jumpshot and couldn’t hold on to the ball.

The final sequence of the game sparked a tiny bit of hope for Falcon hopefuls, though. At the very least, faced with great odds, they still put up a fight. Too little too late, but a 9-1 run against another team in another game with seconds left in the clock is definitely one heck of a feat.

The Falcons need to focus on running their plays with more confidence. If opponents can just slap a zone on them and ruin their game plan, it will be a long hard season for them.