Two ways you can view this game:

Either way, we lost to a more determined team. They needed the win to clinch the Final Four spot and we tried to get in their way. 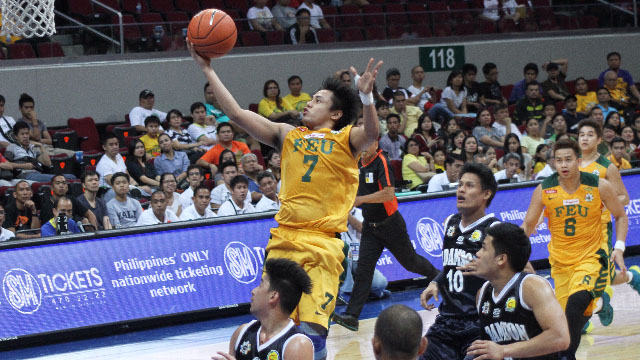 Nope. Romeo clearly had his way. Not only could they not make Romeo miss, but they allowed him to attack the paint. Romeo finished with 32 points off a tremendously efficient 10 of 13 shooting from inside the three point arc. His inside score made up for what should have been a bad percentage from beyond the arc at 3 for 11. This gives Romeo a total of 13 for 24 from the field, one of his most efficient outings this season, thus leading to his career high in points.

For the majority of the game, Romeo was being guarded loosely from outside. While it did result in him taking a lot of outside shots, it also resulted in open driving lanes which he happily exploited. Not to mention the numerous turnovers Adamson gave up resulting in easy layups for the MVP candidate.

Nope again. Romeo was having such a good game Tolomia was not needed. He played only 15 minutes and attempted only 5 shots, one of which went in. Instead of Tolomia, FEU teammates Mark Belo and RR Garcia were the other scorers for the Tamaraws. Belo shot a very efficient 2 of 3 from beyond the arc and 5 of 6 from inside. That’s a total of 7 for 9 from the field. He was hot! Garcia also helped the hot streak with 5 of 8 from inside the line.

This is why it was important to force Tolomia to take the shots instead of the others. Had Tolomia taken more shots, based on his field goal percentage, he would have hurt the team. If he put up his usual 10+ shots a game, he would have made only 2, compare that to Garcia and Belo’s output, Tolomia would have helped the Falcons a whole lot more.

We were out-rebounded. This spelled ultimate trouble for the Falcons because FEU was shooting 56.1 percent from the field at 72.1 percent from within the arc. 72.1 percent!!!! Are you kidding me!? Nobody was in the paint to defend OR rebound?!

Who were FEU’s top rebounders? Belo with 9 and Romeo with 8. Romeo with 8!!! Romeo is a point guard and he out rebounded every Falcon not named Brondial. While it only resulted in 7 offensive rebounds, that’s because they were so efficient from inside the paint.

Well, Sewa DID only play 15 minutes, but that’s a frustrating effort from the backcourt not bodying up their man when the shot goes up.

We made 44.9 percent of our shots from the floor, which is pretty decent. I have to give it to Celedonio Trollano Jr. for leading the scoring. He shot a remarkable 8 of 11 from within the line but his percentage dropped because of his 3 for 8 shooting from outside, though it’s still not that bad. Cruz, who was not 100 percent, contributed 13 points on 6 of 17 shooting. Had he not taken so many outside shots, his percentage would have been much better.

Despite these two players going on a decent scoring show, the Falcons offense was still very stagnant except for a few plays wherein the ball moved beautifully on offense.

Trollano and Cruz are shot creators. Trollano, for all his three point shooting prowess, has no qualms in putting the ball on the floor, taking his man on the isolation and getting the points they need. The same can be said for Cruz sans the three point shooting prowess. Their points often came from plays they make for themselves. Not bad on its own, but the impact on the team means the offense stagnates.

Why was getting Cabrera and Brondial their touches important?

Look at Brondial’s shot percentage. That’s 4 of 7 from inside with 5 attempts from the line. Brondial is (other than Sewa) their most efficient scorer at the moment simply because his mode of attack comes from inside the paint. While he does have tendencies to settle for outside shots, his shots tend to be less contested from the outside compared to those of Trollano or Cruz. More touches for Brondial means the offense is moving well enough for him to receive the ball in the post.

Cabrera, just by being Cabrera, can attract the defense. If he’s not taking shots while on the floor, he’s doing the opponent a favor. While Cabrera only attempted 3 shots all game long, it means they weren’t looking for him, or the offense wasn’t working off the ball well enough for him to get his shots.

Coach Leo emptied the bench in this game. He knows a lot of his players won’t be coming back next season and these no-bearing games are a perfect way to give the rookies some playing time.

It’s a matter of playing for two seasons, now. The Falcons aren’t going to move up in the rankings no matter what at this point, so the best thing they can do is work out the kinks in their system and learn as much as they can from it.

As sad as it is to be in this situation so early, it opens up new opportunities for seasons to come. Who knows, maybe this time next year we’ll be writing about our plans in the Final Four, then again, maybe not.