There are few more frustrating losses than in a game where consistent free throw shooting could have made all the difference. Free throws can show you the amount of poise, polish and focus a team has; not making free throws shows you how all-over-the-place a team is.

As Almond Vosotros hit the game-winner to seal in yet another La Salle victory over Adamson, I couldn’t help but feel that we had it coming. 70-69 does not reflect the kind of game Adamson played. Frankly, the game shouldn’t even have gone into overtime, or have been as close as it was had Adamson played at a caliber worthy of being considered as contenders.

Review of Keys to the Game

They got this right. Jason Perkins virtually vanished from the game, scoring only 6 points and two rebounds. This meant Adamson was able to double off Perkins to help on the other bigs, which helped to some extent. Ultimately, it didn’t matter that Perkins wasn’t producing, because La Salle found help from their other players. 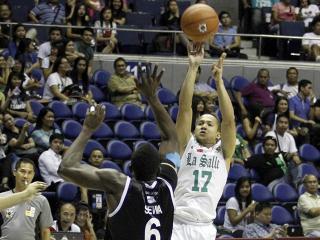 This one was executed partially. While Perkins and Norbert Torres were held down, Arnold Van Opstal went crazy posting up Adamson’s bigs. Using speed, size and skill, AVO was able to capitalize on each of his hat tricks at least once in the post before his defender finally found out how to defend it. Adamson ended up throwing quick double-teams at him in the post but that led to shooters opening up.

Another unfortunate development for Adamson was that one of the guards shot well for La Salle. Almond Vosotros tore up Adamson’s defense from the perimeter, hitting mid-range jumpshots and causing a lot of problems for them, magnified by the fact that AVO was dominating the post. Vosotros ended the game shooting 8 of 18 from the field including the game-winner.

Jeric Teng was held to bad numbers, though. Had the ball gone to him a bit more, the story might have been a little bit different. Among the top scorers of La Salle this game, Teng had the ugliest field goal numbers, hitting only 4 of 14 shots from the field. Clearly Adamson would have wanted Teng to attempt more baskets.

This key is more of playing the percentages. In the end, even if Vosotros did beat them, he was doing it on a true shooting percentage of 52.7%, a much better gamble than the 76.9% TS% Perkins had in the first round.

I can’t believe how hard this one bit us in the butt. The tables were turned. La Salle was sent to the line only nine times (good). Adamson went to the line 30 times (better)! Problem? Adamson missed on 14 of those 30 attempts (fine). Even worse, Adamson really needed all of those free throws, because Adamson had 12 less field goal attempts than La Salle (worse). Not only did we shoot less, we shot worse making only 24 of 66 shots to their 29 of 74 (horrible).

It’s great that the main men of Falcons are finally fixing their free throw acts. Brondial made 5 of 8, Cruz made 6 of 8, Cabrera made 2 of 3, that’s all fine and dandy. What bugs me is the supporting cast who missed on what few attempts they were given. Trollano hit only 1 of 3, Monteclaro struck out with nil for 2, Mike split his two free throws, Julkipli made only one out of four.

I could forgive Brondial missing a big bunch of free throws because a lot of them were bonus shots anyway, but to his credit, he hit two big ones that tied the game and sent it to overtime so that’s a lot of poise coming from “El Kapitan”. But for the rest who shot under 50%, that’s a big lapse right there that showed they weren’t ready to compete.

Review of the key matchup

Neither of them were a factor for their team. Sewa’s only basket came in the form of a dunk while for the rest of the game he was frustrated and lackadaisical in his movements. Perkins didn’t need to put up big numbers as his teammates were doing fine without them.

Rodney Brondial showed why he was “El Kapitan” for his team, carrying the rebounding load for a missing Ingrid Sewa and also the offensive load of a very confused Adamson offense. His 19 points and 23 rebounds reflect just how much they needed him to clean up after them, after all, he’s not their go-to scorer and offensive rebounds come off your own missed shots.

Their bad spacing on the offensive end negated any effort they put in on the defensive end. Everyone looked confused on offense, everyone was trying to get himself going one way or another, and everyone was trying to do it on his own. There were moments of individual brilliance, but that’s not what made them look like contenders, it was the team work and selfless play that caught the attention of naysayers.

Now, Adamson sits quietly, alone at seventh place, looking up and seeing the anomaly on FEU’s record. Doubt starts to creep in toward them as to whether or not they can still call themselves contenders this year. Some might even say they just don’t want it as much, other will say, “I told you so.” There are still a hand full of Adamsonian hopefuls who refuse to write off their team despite this last performance, myself included, they have to reward them for their faith.

For the next few games it’s not going to be about winning or losing but how Adamson plays. They cannot afford to act confused on the court again or they can kiss their championship dreams goodbye.