Falcons get fried by 32 against Bulldogs

There was tension among Falcons after the game, why wouldn’t there be? They just dropped a game by 32 points against a team that they sent into the same desperate mood in the first round. Not only was NU playing hot, Adamson just allowed them to get hot and stay hot. There was no fight in them and so the lead just ballooned.

If there was a time to show their true colors, this game would have been it, but based on their late-game defense, it showed they were just a group of punks, not ready to contend for the championship, well and happily content with the 3-4 first round they squeezed out.

It was hard to watch the Falcons commit turnover after turnover, heave bad shot after bad shot, most Adamsonians pretty much wanted to hit start and quit game midway through the fourth. They were bad last year, but they never allowed themselves to be whooped like this.

He scored 16 points on 7 of 12 shooting from inside the line, 1 of 3 from beyond and 1 of 3 at the stripe. No, they didn’t lock Bobby up, in fact, they allowed him to just put up his shots. BRP was taking on the Falcons defense and just schooling them on why he’s MVP. Not only did he score, he also found his teammates for five assists. The defense seemed disinterested and this was the result. 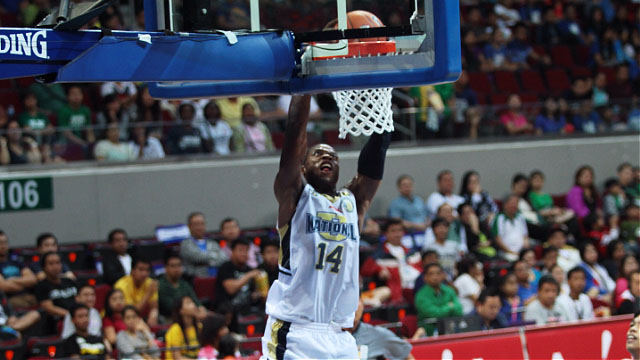 In all fairness to Sewa, he tried. He was 3 of 4 from the field and split his four free throws. They wanted to get the ball to him, but they found him a bit too late. Yes he made a small run before halftime but after that run, NU was able to collapse on him, taking him out of the picture yet again. Adamson has yet to wring wins out of Sewa and already teams have learned how to stop him. They knew what they wanted to do with Sewa, but so did NU. NU read them like a book and Adamson couldn’t respond.

They shot 7 of 16 for 43.8% from the free throw line. Cabrera hit 1 of 5, Cruz hit 1 of 3, no, they were definitely not focused. They were so all over the floor they turned the ball 23 times leading to 20 points off turnovers for NU. I’ve mentioned before that Adamson lost games from the line, this game isn’t one of them, but a healthy free throw percentage could have helped at the very least.

They threw up desperation heaves, they were desperately trying to get going, but no. Even in the first half where they were still somewhat in the game, the Falcons were already playing sloppy. In the first half alone they already turned the ball over 11 times. Sure, NU turned over the ball 10 times but at least NU didn’t allow 12 turnover points! Adamson rewarded NU’s pressure defense while Adamson couldn’t score off the ones they forced. Not good at all considering they have one of the best coaches in the league on their side, yet couldn’t get their offense together.

By the looks of it in the fourth, I guess they sort of did. They made up their mind to let go of the game. By the five-minute mark, the Falcons were playing defense with their arms and hands down, not even bothering as Bulldogs took turns scoring on them. It’s okay to be overwhelmed, it’s okay to be beaten, it’s okay to lose, but I haven’t heard of a time (other than the NBA Finals) when it’s okay to just give up and call it a game with minutes left on the clock.

On offense, they were looking for Sewa (good) but in the process, missed out on several potential attempts for Cabrera off the curl. It was good they were looking for the high-percentage shot but their ball movement suffered. Double screens on top of the key for Ryan Monteclaro doesn’t do much to wither down the NU defense, especially if a) Ryan Monteclaro isn’t going to attack in any form b) the screeners won’t roll into the paint c) the shooters aren’t going to cut or move.

In the end, Adamson fans don’t really need a winning team, we’re used to the heartache. All we ask of our team is to play with the heart that got them their first twice-to-beat advantage ever. We all know that Adamson can bury teams by thirty, but more than that, we want to see our team be resilient, the same way UE clawed its way out of the 30-point rut Adamson put it in. We know that Adamson has no Roi Sumang or Kiefer Ravena, no Terrence Romeo or Bobby Ray Parks Jr. which is why all we really come to expect from our team is to play with relentless tenacity and desire to if not win, at least compete.

They’ve already proven me wrong. With 6 losses, it’s impossible to get the 9-5 finish I predicted, but at least they still have a chance of making the Final Four. It will be a tough battle, it will be an uphill fight, it will take every ounce of determination they have to get there- ask me if they have it in them right after the FEU game, I wouldn’t have hesitated to answer, “Yes.” Right now, all I can offer is an, “I don’t know.” It’s up to the players, really, if they want to get to the final four. They can’t count on anyone else but themselves. Coach Leo has coached his way to a championship in the international scene, the Adamson fans have been rabidly supporting them through thick and thin, the alumni support, the school support, everything they could ever want is already in place, but all that support can only do so much. We have to reward the faith of the faithful and slacking on defense just because we’re down isn’t the way to do it.