Falcons drop out of F4 race with loss to Tigers

It is now mathematically impossible for the Falcons to make a bid for Final Four. With three games remaining and four games behind the closest contender, the Adamson community face yet another disappointing season.

The fight to stay alive was going well and strong until the fourth quarter. Tigers went down, got iced, stood up and came back on the floor. Their captain was still sidelined with a hamstring injury and quite frankly, this was a very disappointing game execution-wise.

The final score of 80-67 does not begin to surmise how closely fought this game was.

They were doing this so well for 35 minutes of the game. The Tigers shooters finished 23.5% from beyond the arc, a big factor being the pressure applied on them. The problem for the Falcons came when UST started hitting crazy shots and pulling up in transition, there’s nothing you can really do about those.

This is what I meant about UST’s bullying ability, they’ll be more than happy to drain a three if you let up on them for even just a second, making them a very tough team to guard because the same people who hit the threes are more than capable of taking the ball straight into the hoop.

Sewa played eight minutes less than Abdul, which was sort of expected. Abdul still got his 12 rebounds, but what Sewa’s presence on the floor did was force Abdul to think twice about his shots. An average 44% shooter from the field was forced to take 24 shots to get the 19 points he needed to lead his team to victory. That’s a total of 9 of 24 field goals made for significantly lower 37.5% from the floor considering Abdul is a center.

Spacing on the floor

The Falcons really need to work on this. It really looks like they don’t trust the system enough. They often find themselves dribbling too much and then end up having to take a one-man drive or just heave it up. Right now I’m speculating that this is a result of confusion as to player roles and the system, what they should and should not do versus what they can and cannot do as to personal ability. For the most part, they were spaced too wide for the pass but too close for the drive. 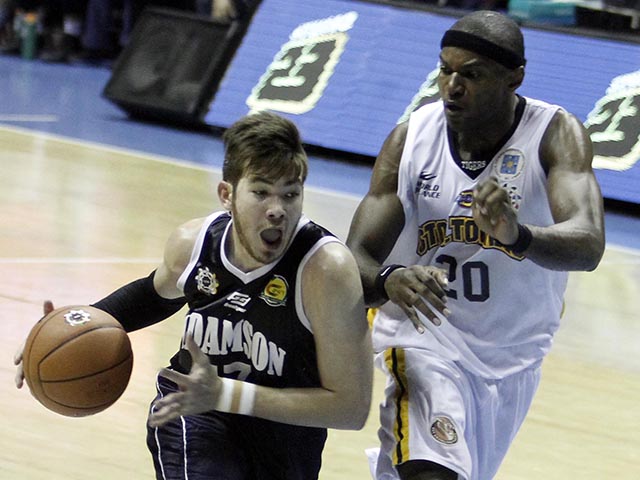 They tried, I can honestly say they tried. Unfortunately all their tries just wouldn’t fall for them.

There were numerous attempts from Cabrera (in fact, 11) from beyond the arc, many of which were wide open or came of a curl into a catch-and-shoot situation, attempts that on any other day would have gone in. I will never have a qualm in giving Cabrera a three-point shot as long as it comes from an open look or at least one that was orchestrated for him, the fact he only made one shot this game can be shrugged off to being on an off night. No matter what, when Cabrera gets those open looks, you want him taking them.

The rest of the team tried to pitch in too, Brondial made one, Cruz attempted one, Trollano made a couple, Monteclaro, Petilos and Iñigo tried to contribute as well. No, they weren’t enough, I would have liked to see Monteclaro get at least four attempts from beyond the arc, acting as a one-two punch between him and Sewa or Brondial, but I guess those two attempts will have to do.

Unlike the Falcons, the Tigers have a constant green light to heave from long distance, this includes Abdul, reason being they also know when to put it on the floor. This is why they can bully teams around, switching from one mode of attack to another, an ability the Falcons clearly lack. 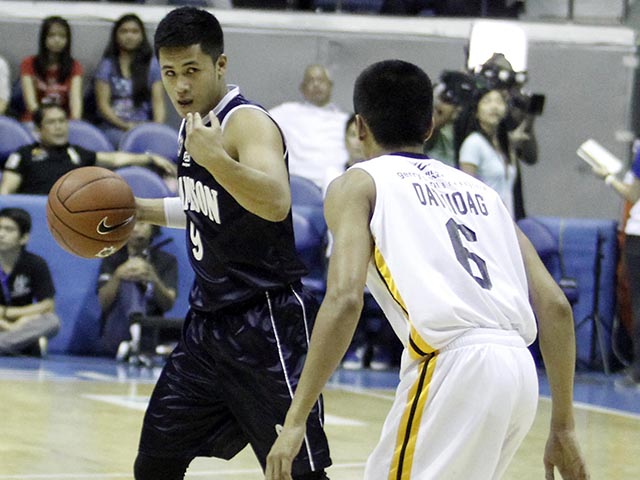 Cruz dares Daquioag to guard him. He gave up six turnovers in the game, but I still wish more Falcons had this kind of guts. (Photo credit: KC Cruz, GMA News Online)

The Falcons are done for the season, the last three games will be spent playing for pride. They run the risk of matching last year’s record of 3-11 but also have the chance to better their Season 72 record of 5-9. Whichever the case, the Falcons need to start rethinking how they approach the game, the system and their roles.

In Season 74, Coach Austria said, “We don’t have to change the system. We don’t have intentions to change it.” He’s right. In the long run, as a grind out team, this system can weather any storm. The only problem the Falcons are facing right now is having the likes of Nuyles, Lozada, Cañada, Alvarez and Colina as the mold for running the system. Cruz and they others play very differently from when the Falcons saw the height of success under Coach Leo, maybe it’s time to decide on one thing: whether they will run it like the old “glory” days or run it their own way, learning mastering and absorbing the system to fit their personal strengths and weaknesses.

At this point, Adamson wants to finish strong and to make it to sixth place at the very least to get them a ticket to the PCCL where they have a chance of repeating their performance of tearing teams a new one. But getting there still requires them to win games. They are three games behind the sixth place, they have three games left, they know what to do.