Changing a culture with a law

Following the controversial board resolution of the UAAP which tried to prevent student-athletes from jumping ship to different UAAP schools, the national government has decided to put an end to the controversy by legislating against it. Senate Bill 2226 has already passed its first reading in the upper house and if it does not meet opposition in their coming meetings, it will likely be passed into law.

(To know more on how bills become laws, please check out this link)

I am not about to discuss the wisdom behind the proposed law or weigh in on whether or not it is beneficial, but I will be speculating based solely on the legal and other possible implications it could have on the UAAP and other collegiate leagues in the country based on how we apply laws in the Philippines.

The Black and White

Under this proposed bill, there are a number of things that are made clear as day:

2) They want student-athletes to remain “amateur”; and

3) Residency rules have a maximum of 1 year.

That’s where the clarity stops. From this point forth, the proposed law is marred with incomplete policy that reeks of loopholes and undue delegations of power. 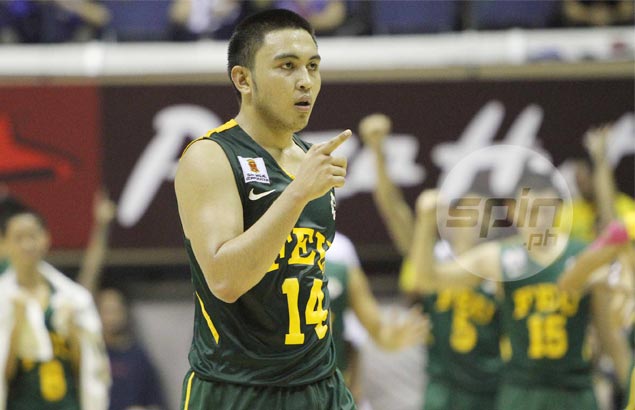 The UAAP came up with the new residency rule after reports that Jerie Pingoy would leave FEU to play for UAAP rival Ateneo. (Photo credit: Spin.ph)

Administrative agencies are sometimes imbued with quasi-legislative power, often times this is used to better serve the intent of the law or to supply the lawmakers with the specifics that only the agency’s expertise can provide. Section 7. Reads:

SEC. 7. Benefits and Incentives.-Schools may give deserving Student-Athletes the following:

The bothersome line is in paragraph 3 when it states, “which shall be in accordance with the Implementing Rules and Regulations of this Act, as approved by the director of the school’s athletic program or his equivalent and standaradized by the athletic association that the school is affiliated with.” Through this paragraph, the Senate is effectively handing over the legislative power in determining what “A reasonable living allowance” is to the implementing agencies which are DepEd and CHEd.

As I stated earlier, it’s normal for Congress to allow agencies to fill in the blanks for them in case of technical questions. This is not a technical question. It’s a very political question that requires at least a hint of legislative intent. It gives free reign to the agencies to base the reasonable living allowance on anything they want and it wouldn’t be against the law as long as it’s approved by the sports programs and the associations.

In effect, if the agencies suddenly decided that shoe size would be a basis for computing what a reasonable living allowance is since bigger feet need more material and for some reason the schools agree, it becomes part of the law and all schools that wish to participate in the future have to abide by it.

Frankly, this is not allowed and if taken to court, might be taken down for being unconstitutional. If it does, it will strike down the paragraph that describes a livable allowance and student-athletes will not be allowed to receive an allowance from their school due to the other restrictions in the act.

Adamson’s Ingrid Sewa before a game during the 2013 Fr. Martin’s Cup. Adamson’s Cameroonian center in Season 76 had to serve 2 years before being allowed to play in the UAAP. The new law would have reduced his waiting time to only 1 year and if the foreign student were a freshman, no waiting time at all. (Photo credit: The Adamson Chronicle)

Remember those giant foreigners who hang around the athletes but you don’t actually see in the UAAP games yet? Yes, the ones who are still serving their residency years. Well, they’ll be a thing of the past since they won’t have to wait a second more just to play for your University.

The law explicitly prohibits associations from drafting any form of rule that would add a residency requirement for incoming college freshman athletes and all high school athletes. This effectively includes prohibiting residency rules on incoming college freshman foreign students. In the application of laws, there is a principle we follow that goes, “Ubi lex non distinguit nec nos distinuere debemus.” (Where the law does not distinguish, do not distinguish)

Section 6 of the bill does not state if the student athlete would have to be a Filipino, all they need to be is enrolled into that school with good academic standing. It also does not make any distinction on whether the school the student is transferring from is in the Philippines or not.

This means the current UAAP 2-year residency rule for foreign players would be deemed null and ineffective because of the law. This would open the flood gates for immediate playing of foreign college freshmen and a reduced residency for college transferees.

Sec. 8. Commercial Consideration. – Schools shall not offer a Student-Athlete or his immediate family members benefits or incentives beyond that enumerated under Section 7, which are contrary to the nature of amateur sports and which may result to the commercialization of a Student-Athlete.

This section makes it clear who may or may not do what to whom. It makes it so clear that it’s like setting up an impenetrable wall 2 feet wide to guard a 50 foot door. Yes, the SCHOOL can’t offer a Student-Athlete or his family any benefits, but it does not prohibit other entities from doing so. In effect, the alumni association of the school or PTA of a certain school can do it for their stead. There’s no catch-all phrase to include these similar entities from performing the prohibited acts. As long as you aren’t the school administration, you can offer any athlete any benefit to play for your school.

I’m not saying that there are organizations that might engage in it, but it becomes a big possibility given how small the scope is on the prohibition. In interpreting a prohibition, there are no, “It’s understood to part of the prohibition”. Anything that is not prohibited is allowed. The inclusion of one excludes everything else.

These are just some of the legal implications that are most apparent. Some might be good for the league, some might be bad, but what worries me is that some provisions will not function the way they intend it to. Hopefully the future drafts of this law will close the loopholes and that the implications the laws bring are the ones they intend to happen. Will it make for a better UAAP? Who knows? All I know is that if it gets passed, big changes to the culture of all collegiate sports will take place, so brace yourselves, sports fans.

The author is a 3rd year Law student of Adamson University and has completed units in Statutory Construction and Laws on Agencies.