Burnt out Falcons snuffed out against Raging Warriors

There is just no fight in them anymore.

Against a team that has their team firing them up despite getting knocked out of the Final Four race, an exasperated Falcons squad stood no chance.

After learning that their coach may or may not be back despite everything he has done for them throughout their careers, the fire that once burned in them in the first round was taken out. Like night and day, it’s hard to believe that in the first round, this was the same team that led by 30 points over UE.

Reviewing The Keys to the Game

The Falcons have had enough to eat, they couldn’t handle Mammie anymore. Mammie broke out for 24 points and 24 rebounds, not exactly numbers you want to see if you were trying to stop him. On his own, Mammie produced more than half of Adamson’s total rebounds. Sewa was only able to match up with him for 15 minutes on the floor while Mammie nearly never went to the bench. This caused Mammie to be able to exploit a distinct height, weight and size advantage over other Falcon centers, especially Mike Agustin.

This kind of domination from Mammie made up greatly for the absence of Roi Sumang. 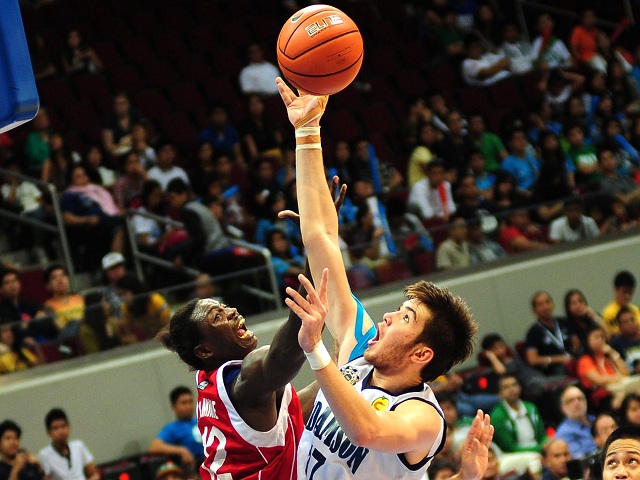 Only Celedonio Trollano Jr. was able to make a significant contribution to the offense. In the absence of Cruz’ scoring, it seems like the Falcons have found a new scorer in Trollano. Monteclaro tried to get into the action, but on drives. Cabrera and Brondial were missing from the offense, neither could get anything going and the shots were spread around a bit too thin. Only Trollano took more than 10 attempts.

I think the fact Mammie got 24 points and 24 rebounds speaks for itself. UE had 20 second chance points on Mammie’s 10 offensive rebounds and 26 total offensive rebounds. Mammie having his way in the post opened up the perimeter for  the rest of the team which shot 8 of 23 three pointers.

The Falcons couldn’t return the favor with only Trollano having to “diskarte” his way into the 17 points he got.

It was a nightmarish game to end a nightmarish season. After learning their managements wants to rip apart what good is left in the team, it’s easy to ponder on the “what ifs” this season could have been.

Maybe next season, maybe the one after, maybe…