The darlings of Philippine Basketball today are the (Smart) Gilas Pilipinas National Team. And, why not? After all, they are the first Philippine Basketball Team to make it to the World Cup after so long. Add the fact that Gilas finally eclipsed the Korean Curse, it just makes the story even more sweeter. It was the perfect underdog story for Filipinos. Filipinos were emotional about this underdog story, and for good reason. Those 11 magical days in August will forever be etched in the minds of Filipino basketball fans out there. A month later, September 25, 2013, another underdog story was unfolding before the eyes of Filipino basketball fans.

Enter the story of the Batang Gilas Pilipinas National Team.

This term paints the image that is Philippine basketball. It’s very cliche in our country, but it is also cliche for a reason. It’s cliche, because, it is what Philippine basketball is. Whether it be kids playing “kalye ball” or even professional teams grinding it out, #PUSO is the very center of their games. Pinoys love that underdog mentality. For Batang Gilas, Mike Nieto embodies that spirit. 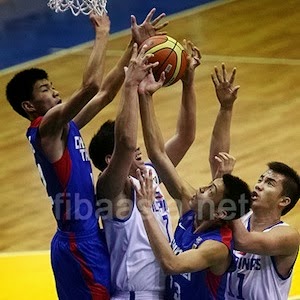 Undersized? Sure. It doesn’t matter to him, and the team anyway. (Photo Credit: fibaasia.net)

Mike Nieto, the Batang Gilas Pilipinas Team Captain, is a known commodity around Philippine Basketball, although for the wrong reasons. Sure he may grab tons of rebounds, but critics always slam him for playing out of position, and for being too small for a center. Critics give him remarks like, “Sus wala yan pagdating ng seniors.” The same could be said for the Batang Gilas Pilipinas Team.

Past iterations of the U16 Team had a sponsor backing them up, and talent was abundant in these squads.  The 2009 squad had Nokia to back them up, plus, they had names like Kiefer Ravena, Jeron Teng and Kevin Ferrer leading that team, all established stars during their High School Days. The 2011 team had Energen as their sponsor, and they had names like Jerie Pingoy, Kyles Lao and Prince Rivero leading the team. In short, they were teams that received tons of support not only from benefactors, but also from schools. The same couldn’t be said for the 2013 team.

First, they had trouble getting a sponsor to fund their team entering the FIBA Asia U16 Tournament. As the team captain, Mike was visibly worried. “Siyempre problemadong problemado kami kasi unlike the other RP Teams na may budget, kami wala, tapos kami lang ata yung RP Team na walang allowance going into the FIBA Asia Tournament,” The bigger Nieto states. “And another problem was the availability of players. Kasi nga diba ongoing yung UAAP at NCAA kaya may players na hindi pinayagan.” If Gilas Pilipinas had problems getting players from SMC funded teams, the Batang Gilas had trouble getting players AND money. Turns out that wasn’t the only problem they had to face.

Motivation. This was still a motivated group of guys who had so much taken away from them. They could have just pulled out from the FIBA Asia Championships, but they didn’t.

Turns out this motivation was the stepping stone to the success Batang Gilas was about to attain.

TEAM Pilipinas for a reason

Filipino basketball is often criticized for being too iso heavy, especially in Barangay leagues. One may ask, “Why compare kalye ball to organized basketball?” Well, the habits one gets from kalye ball are hard to unlearn, even when playing in an organized structure. Well, Batang Gilas was not having any of that.

Matt Nieto, known as the Junior Phenom to many, is known in the Philippine Basketball community as a pure point guard. It’s actually pretty evident given that Jimmy Alapag of the Gilas Pilipinas Squad is one of his idols.  But just like his other idol, Jayson Castro, he can run too. And that’s the specialty of Batang Gilas Pilipinas, running.

The tallest member of the team is Richard Escoto, and he only stands at a measly 6’3″. If you compare to that the heights of teams like China and Japan, the U16 squad would look like a bunch of Grade Schoolers playing against High Schoolers. Given this fact, Matt, being the starting point guard of the team knew already what the pace of the game had to be for the team to have a chance entering into the FIBA Asia Tournament.

The team was motivated. It knew its strengths as a team very well. It was time to put those two into place.

Young, undersized, but deadly at the same time

The Batang Gilas didn’t only have one of the smallest teams in the FIBA Asia tourney, but they also had one of the youngest members in the tournament in Jolo Mendoza. In fact, because of their deficiencies, no one really expected them to excel in this tournament. They already had doubters from the beginning. It was time to silence those doubters.

Often compared to Kiefer Ravena, Jolo now has one thing that Kiefer doesn’t; a ticket to the FIBA World Championships. (Photo Credit: fibaasia.net)

Batang Gilas Pilipinas started the FIBA Asia tournament with a close win against Kazakhstan. Afterwards, they ended up losing a close one against Chinese Taipei. After that, however, Batang Gilas decided to turn it up.

They would go on a 4-game onslaught before facing the same team that beat them in the preliminary round; Chinese Taipei.  It was their one chance at glory. If they got that win, not only would they avenge their only loss, but at the same time, they would replicate the achievement of their kuyas, a chance at the World Championships. Jolo was young, sure, but he didn’t seem to care. “Ako lalaro ko lang yung laro ko, and I’m going to do my best to help the team,” the underage phenom states. Help the team he did.

In that Semifinals game, Jolo went H-A-M, to say the least. He scored 28 points in that game, going 11 of 16 from the field, along with a 4 of 7 shooting clip from three.  Along with Jolo’s supernova performance, Mike and Matt Nieto had 17 points and 14 rebounds and 11 points, 6 assists and 4 rebounds respectively.

“Paulit ulit na namin sinasabi na umabot kami FIBA Worlds, tapos yun, umabot kami,”  proudly states Mike. The dream was now a reality. This team, seemingly from the dead, made it to their goal. The chance to compete at the FIBA World Championships was finally theirs.

While interviewing the three Ateneo Blue Eaglets prospects, I noticed a certain spirit that they would circle around. That spirit, was the spirit of service to the country, and a love for the game.

“Kagaya nga ng sinabi ni Coach Jamike, ‘Hindi ka naglalaro dahil gusto mo sumikat, naglalaro ka dahil gusto mo talaga maglaro ng basketball.'”, says the Batang Gilas Pilipinas Team Captain. That’s exactly what they did during the FIBA Asia Tournament, they just played the game that they love for the country, and look where it has brought them to.

When asked about the prospect of being scouted and recruited by international teams, all of them had one resounding answer: “FIBA Worlds muna.”“Kung gusto nila ako, eh di pag- usapan na lang namin.”, Matt Nieto jokes. Despite the calm attitude the starting point guard is showing, indeed, this team has the WE, not ME mentality.

What are we to expect from the team? After all, they have been practicing thrice a week despite the hectic schedule that they have not only with their varsity teams, but also with school. They are STUDENT – ATHLETES after all. Expect them to put up a fight despite the level of competition that they are to face. “Yung goal namin is to show na may laban kami, na maging competitive kami, at siguro matalo naman yung first assignments namin, yung Angola at Greece para pagdating sa quarters, hindi gaano malakas makalaban namin,” says the smaller Nieto. This team isn’t going to go to Dubai just for the heck of it. Expect them to give future NBA Prospects Ivan Rabb and Seventh Woods the fits during their game against Team USA. They will make the time for their opponents a living hell, all for their beloved country.

This is Batang Gilas Pilipinas. They’re undersized, they have gone through numerous trials and tribulations, but in the end, they are World Championships bound. They are Golden Underdogs. They are underdogs on a mission; to bring pride and honor to the Philippines. In order to do this, Batang Gilas asks for one thing: support from you, the Filipino fans.