San Mig Coffee placed 2nd in the elimination round of the Philippine Cup, earning them the twice to beat advantage. After eliminating Petron in just one game, San Mig struggled during the semi-finals, against a team that they’ve had issues with in the past few conferences — the Rain or Shine Elasto Painters. The Painters took a commanding 3-1 lead and eventually finished the series in 6. Some would say a semi-finals finish is not a bad finish, but we are talking about an ALL Filipino traditional powerhouse in the Purefoods franchise, led by Superstar James Yap and coached by the great Tim Cone, so anything less than a championship is a disappointment .

During the off-season, The Mixers got involved in a huge 5 team, 10 man trade. They traded away  Jonas Villanueva, JC Intal and Aldrech Ramos and got Alex Mallari, Leo Najorda, Lester Alvarez and a 2014 1st round pick. A huge shake up for a team that reached the semi-finals of the previous tournament.  Mallari can play a bit of the point forward for the Mixers while Najorda can add toughness alongside Sakuragi. Lester Alvarez can be a good chief backup for the Coffee prince and might spell Baroca from time to time. And yeah, for those who are interested in the players personal lives, San Mig Coffee traded away Bianca Gonzalez, but added Miakka Lim.

The Mixers are the defending Commissioner’s Cup champions. They will show a lot of pride in this tournament, especially after a disappointing ending in the previous conference. James Yap struggled during the last few games of the All Filipino Semi-finals so expect him to come back strong. Peter Jun Simon  played great during the previous conference, expect him to continue his strong showing in the 2nd conference. Marc Pingris will prove to everyone that he deserves a Gilas spot. A lot of the Purefoods fans are disappointed that Denzel Bowles won’t be their import, or at least not yet, because of contract issues with his Chinese ball club. But Tim Cone and his staff knows how to pick imports so expect 1st time PBA import Matt Rogers to fit right in. Cone said that he prefers imports from smaller schools because they tend to be star players for their schools, and we all know imports here are expected to play like superstars. Defense is one of the strength of the Mixers for the last several conferences. With the addition of new and younger talents, they’ll have fresher legs , and hopefully that would mean that the rotation of SMC will be deeper, a problem they had the last conference. With a deeper rotation , SMC can have more legs to hold up for defense.

If Rogers can’t play like Denzel Bowles, then SMC might struggle especially against teams with dominant imports. Also, there will be chemistry issues when you change players. It’s up to the coaching staff and the players to get their chemistry right ASAP and for the new players to learn the triangle. That’s easier said than done but with a great coaching staff and veteran stars, it is possible. A key weakness for last conference is that they had hard time dealing with deeper teams, like ROS in the semis and TNT in the eliminations, partly due to a shorter rotaion. Relying on star players to play more minutes is not advisable when facing the deeper teams of the league, whose stars are fresher. Hopefully,the mixers can find the right mix for a longer rotation, and their new players may just be what the doctor ordered.

Matt Rogers played for Southwest Baptist University.  He played in the NBA Summer league and for the Texas Legends in the NBA D- league. His numbers aren’t really impressive, just 7.1ppg and 4.4rpg in the D-league but Tim Cone is determined to give him a chance. According to an interview in the NBA D-league website, he likes music, singing, playing the guitar and he graduated with a degree in Bible studies. He would need to be assertive and play a lot like Bowles to free up the local scorers of SMC.

James Yap:  The star player of the franchise, he will be the vocal point of the offense as always. Big Game James needs to be healthy if SMC wants to repeat. 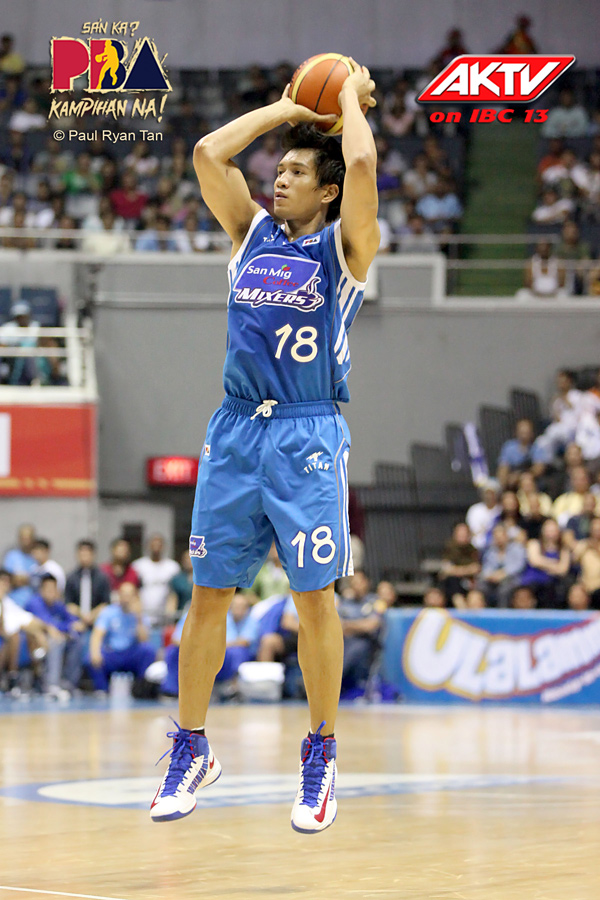 PJ Simon: Some say he is the Pippen to Yap’s Jordan. But there were a lot of games last season where Simon was the one who led the team in victories. Simon needs to prove that last conference was no fluke and if he can continue to have an ALL star type of season, SMC can be back in the promise land.

Wesley Gonzales: Tim Cone really likes this guy. With his fellow Atenean Intal traded, maybe he can get some of Intal’s minutes and contribute in his own little way.

Rafi Reavis: His length and athleticism are  crucial especially in defense.

Lester Alvarez: The former Adamson falcon and ABL player can be the chief backup for this team and a solid contributor off the bench.

Jewel Ponferada: This former bulldog can add bite and toughness to a team perceived as a glamour team.

Leo Najorda: He can be the other sakuragi,  off the bench

Mark Barrocca: He is now the starting point guard and expect him to blossom more. And he wants a repeat of that classic championship celebration!

Jerwin Gaco: The former enforcer of DLSU and Harbour Centre can still be an enforcer in the PBA, if given consistent playing time.

Alex Mallari: Can play the point forward. Time for him to prove he deserves the #3 pick.

Will Mallari finally show his worth this conference? (Photo Credit: spin.ph)

Chris Pacana: Another PG in the rotation.

Joe Devance: One of the best players for this very talented team. He really fits Tim Cone’s system well.

Yancy De Ocampo: This former #1 draft pick had a good conference last year and had several good games. He just needs to be consistent and if he is consistent, he will be one of the crucial big guys on both ends of the floor.

Its hard to give predictions to a team that went through a big trade and with a new import. But assuming things work out according to Tim Cone’s plans, SMC will reach at least the semi-finals. Best Case scenario? Back to Back Commissioner’s  Cup championship for the Purefoods franchise. Who knows, maybe another great Alvin Patrimonio hugging an import moment, and another awesome championship celebration thanks to Marc Barroca.