Before I start what hopefully is a piece that won’t be too lengthy, I would just like to thank Humble Bola and the people behind it for allowing me to share my words and thoughts about the PBA and basketball in this space. Getting an opportunity to contribute alongside great minds is truly an honour.

Nobody can deny the powerful resurgence the PBA has experienced these past two years. Much of the league’s recent success may be attributed to its strong partnership with AKTV and its ability to place the local league in the limelight and give it the premium TV exposure it deserves.  Of course, the modern era has helped propel and expose the charismatic personalities of the league’s current stars to the millions of Filipino Netizens through Facebook & Twitter.

Also, legions of fans that once were turned off by the “palakasan” and under the table dealings that were once commonplace amongst chummy owners of teams are now back cheering for their favourite teams largely due to Commissioner Chito Salud’s firm stance when it comes to fair trades and transactions. No longer is the league dominated by a few teams every single conference. Now, every game has the potential to be a classic, with traditionally weaker teams now able to match league powerhouses punch for punch until the final buzzer. None of this is better exemplified by Powerade’s Cinderella run into the finals of the 2011-2012 Philippine Cup, taking out top-seeds BMEG and an up and coming Rain or Shine team to become the first 8th seed to reach the finals in PBA history.

Before we claim that the PBA has once again entered another Golden Age, there seems to be one more element that’s missing in the equation… a rivalry.

Previous generations were treated to some intense rivalries, the best probably being that of Crispa vs. Toyota in the 70’s. Currently, PBA patrons consider the “Manila Classico” as the rivalry in the league. For the uninitiated, the Manila Classico is a match-up between two SMC owned teams, Ginebra San Miguel (formerly Ginebra) vs. San Mig Coffee (formerly BMEG Llamados, formerly Tender Juicy Giants). The history behind this rivalry is blurry at best, with many a fan not knowing exactly why these two teams are rivals in the first place.

Here’s where Rain or Shine and San Mig Coffee come in.

These two teams can’t be more perfect for each other, let’s break down some key areas: 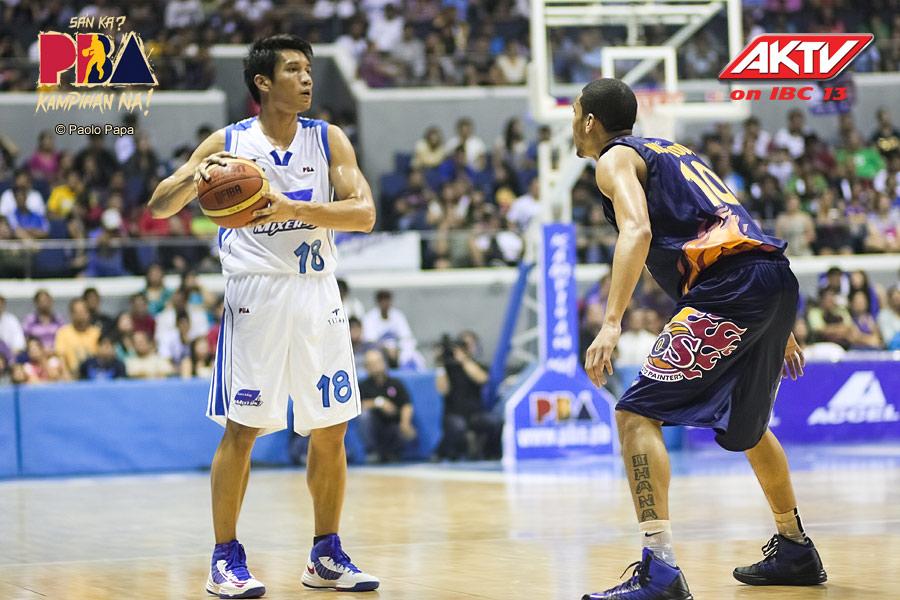 San Mig Coffee (SMC) is owned by none other than the San Miguel Corporation, which gives them the advantage of arguably having the deepest pockets in Philippine basketball. On the other hand, Rain or Shine (ROS) is owned by Asian Coatings Philippines’ Raymond Yu and Terry Que. While very successful businessmen in their own right, their resources can be considered limited when compared to corporate giants San Miguel.

Classic David vs. Goliath if you ask me.

What’s a rivalry without two of the best coaches in the game today? Both Tim Cone (SMC) and Yeng Guiao (ROS) are the best at what they do, but for different, yet equally effective reasons.

Tim Cone, outside of those who directly work with triangle practitioners in the NBA, could be the most knowledgeable and scientific coaching mind when it comes to teaching and installing this complicated offense. I read an article before that quoted a member of a Los Angeles Lakers staff commenting after attending a Tim Cone practice, that Tim runs even more complicated Triangle schemes than the Lakers. Then there’s the recent comments current 3rd string center, Gerwin Gaco on an online show, mentioning how much time Coach Tim invests in teaching all the intricacies of the offense to all 15 members of the team, regardless if you’ll be playing 40 minutes or not playing at all.

Now we flip the board to Coach Yeng. I think that once he retires from coaching, he should start giving some lessons on motivational speaking, because it is insane how well this man is able to motivate a team. ROS does not have any marquee names like James Yap or Arwind Santos, but they don’t seem to care at all. In fact, I think they like it that way better. It takes a special coach to mold a team like ROS to what it is today and that’s what Coach Yeng is. Plus, it really doesn’t hurt that he has, quite arguably, the worst temper in Philippine basketball.

If there’s a team that should be the role models when it comes to being patient with their young guys, then ROS should be that team. Fielding a roster with their own picks playing key roles, the team exhibits a certain level of trust and cohesion that only a combination of time and a good system is able to breed. Currently, original draftees Gabe Norwood, TY Tang, Jervy Cruz, Paul Lee, Chris Tiu and Ryan Arana all play key roles of Rain or Shine.

Looking at SMC, the team has talent in almost all positions from the likes of Marc Pingris, Wesley Gonzales, Jonas Villanueva, Joe Devance and many others, but in my mind this team will live and die with the sweet scoring machine that is James Yap. Personally, I’ve seen James Play countless times both n TV and in person and I am really willing to say that he is the closest player we have to Kobe Bryant in terms of putting the ball in the basket. Watching him live during Game 7 of last year’s Governor’s Cup, I was absolutely floored at the countless ways he is able to score the basketball. Treys, pull-ups, post-ups, floaters, & acrobatic drives are all in King James’ arsenal, ready to be deployed at a moment’s notice.  In true Kobe fashion however, he does force things sometimes, but even when he does, those shots look so on line that you find yourself expecting them go in… and shaking your head in disbelief when they do.

In terms of looking at the playing styles of the two teams, both can’t be more far apart. While I am not the best judge when it comes to dissecting professional basketball schemes and tactics, watching a team like ROS play gives me the impression that this is a team that just plays so damn hard and is a team that has so much confidence in each other. In each game, you’ll never know who will step up and take on the scoring load or get that defensive stop. Of course, being this unpredictable does present challenges. There will be times when they can’t find anyone that’s got the hot hand in a game and when that happens, their offense can go really, really cold.  For ROS though, there are only three constants, 1) Defense 2) Unpredictability (can be good or bad) and 3) Screaming girls (Thanks to Chris Tiu).

SMC on the other hand, is a system team. Bannering the Triangle Offense, the team hopes to confuse opposing defenses with their own flavor of unpredictability, since the Triangle Offense requires all players to be able to read and quickly react to the situation that the defense is giving them. After some trouble transitioning to the Triangle last year, it was able to bring them the championship during the Commissioner’s Cup and a finals seat in the Governor’s Cup, so being in the semis of this year’s Philippine Cup is right where SMC thought they would be.

Guys, while San Mig Coffee vs. Rain or Shine is still not yet a rivalry for the ages, we should already take this chance and get to see these two teams battle it out as many times as we can. Both teams are so opposite to each other, making them perfect opponents for 48 glorious minutes of PBA basketball action. Who knows, with Coach Yeng mulling a return to politics after this season and James Yap getting older each year, we might not have too much time left with this cast of characters. Let’s enjoy them while we can.

Game 1 of their best of 7 semi-final series starts tonight.