It’s been a while since we last talked PBA and what better way to get back at it than to discuss the saga that unfolded inside the Ginebra/San Miguel Corporation camps.

Joining us for this post would be three of our PBA writers, RJ Salido, Arnold Villa and Ven Dionisio. We have three questions in store for them, so let’s see what they think about this most recent round of drama in the association.

1. Thoughts on the entire saga? What do you think was the root cause or main issue behind everything? And in the end, did San Miguel do the right thing?

RJ: I thought it was crazy. First, Coach Olsen and Coach Al enjoyed their first conference as full-time head coaches of Petron and Ginebra respectively. If not for the Balkman incident, I think Petron would’ve been a contender, while Ginebra finished as the runners-up in Coach Al’s debut. Despite all of that success, the shuffling of coaches happened. Obviously, the fans became anxious and took to social media to air out their opinions. In the end, I think SMC did the right thing by pulling Noli Eala out of his post. I guess after all that, the “haters” were barking up the RIGHT tree.

Arnold: As a long-time fan of San Miguel or Petron and its two sister teams, this is the first time that I have seen the SMC Umbrella in such a bad light. I’ve seen them struggle before but the past three years has got to be the worst that I have witnessed. The last three years saw a lot of prominent personalities who spent most of their careers with the organization, from players to coaches, walk out of the door and jumped to rival companies. Players and coaches from the three teams seemed uncertain and unsafe of their jobs because of the unending wheeling and dealing every conference. I still can’t fathom why they needed to make trades every time they fell short after a certain conference. I think Eala was always looking for stop gap measures thinking that a temporary solution will help the teams to fare stronger in each conference, which obviously had the exact opposite effect.

It has always been this way since 2011, if your team fails to qualify for, let’s say, at least the semifinals, expect them to do trades or reshuffle the coaching staff. It sucks for a loyal fan to see these three teams like this. Patience and chemistry seem to be missing in the dictionary of the upper management nowadays. Have they forgotten that the success of San Miguel was built through patience? The “Win Now” mentality of the management and Eala’s axe to grind against the MVP Camp proved to be detrimental to the whole organization. The urge to always get the upper hand against their arch rivals was right in a sense but their decisions on how to do it were always wrong.

Petron, (San Miguel back then) has always been known to have a strong roster but the hoarding of star players has never been this bad. Some of the young players that have the materials to become star players in the PBA who ended up with SMC seemed to never have reached their full potential (Rabeh Al Hussaini, Noy Baclao and Rey Guevarra). The axing, or should we say, the “re-assignment” of Noli Eala is a good move. It may not be seen in the next two or three conferences, but it will be beneficial to the whole organization as long as they appoint the right person to replace the spot left by Eala. All they have to do is get rid of the players that have turned out to be black holes in the three teams and put premium to chemistry, just like the old days.

Did Rabeh’s development suffer when he was with Petron? (Photo Credit: Nuki Sabio, AKTV)

Ven: Personally, I actually liked the moves that the SMC organization made this season. The Coach Olsen Racela and Rajko Toroman partnership in the Philippine Cup for Petron could’ve been great if given time and the chances of the Chua-led coaching staff eventually bringing Ginebra a title sooner rather than later were pretty solid. When all the drama started unfolding, I was just flat-out confused. Why transfer someone after just one season? Why change a college team’s coach just days away from the opening? Why bring in another foreign consultant when the first experiment didn’t work? It just didn’t make sense.

But, after giving it some thought, I finally realized that it’s really the lack of trust from the management (including, but not limited to Mr. Eala) that’s the root cause of this entire SMC issue. To me, the way the San Miguel management treated Petron and Ginebra clearly shows a lack of trust in its personnel. If they trusted Coach Olsen from the start, why would you need to stick Toroman beside him? If they trusted Coach Alfrancis, then why overhaul his entire coaching staff and make trades without (allegedly) his consent? If they trusted the players they have on their rosters, why stockpile even more players on the bench that are itching to replace them? There is absolutely no way that you can get a group to perform at their best if you don’t trust them and vice-versa. It’s no wonder then that Petron suffered from Petronovela and Ginebra suddenly got its act together under a coach that well… simply didn’t give a f*ck what management thought. In the end, while it may not have been 100% Eala’s fault, letting him go re-assigning him was probably the only move SMC management had in order to quell the uprising not only from the fans, but also within its own ranks.

RJ: The San Miguel teams will be alright. I think Petron and Ginebra will suffer from all the changes and drama of the offseason as they will have another new coach and yet another foreign consultant on the bench. For Ginebra, the team will be living in uncertainty. Even if SMC released a statement saying that Coach Chua will just be taking a temporary leave of absence, I still doubt his return this season.

Coach Alfrancis Chua, in or out for the Governor’s Cup? (Photo Credit: Paolo Papa, AKTV)

Arnold: The recent developments within the SMC Umbrella is going to be beneficial for the three teams. If and only if they appoint the right person in lieu of Eala, then they are going to relive the glory days of the organization in the PBA. For San Mig, I think they are safe as long as Tim is there, he knows what to do and he knows what he is doing. For Petron, all I want is for them to remove the black holes and be patient no matter what happens in their campaign in the next two conferences. As for Ginebra, I don’t think Coach Alfrancis will return this season but my gut feel says, he will be back next season. Again, the benefits of Eala’s “re-assignment” might not be seen in the next two conferences (I hope I am wrong) but in the long run, this will be good for the whole SMC in the PBA.

Ven: First of all, nothing changes for San Mig Coffee. Tim Cone runs that boat and they’re better off that way. As for Petron and Ginebra, I hope that these two teams start to experience some form of continuity once management settles on a new boss for them. These two teams are built well and definitely have the potential to face off against each other in the finals of a conference in the next season. Unfortunately, we will still see some residual effects of the Petronovela rear its ugly head in the Governor’s Cup and even Coach Alfrancis’ return to the Ginebra bench will not magically blend Aguilar into the team nor give Tenorio’s tired legs a rest. With the right management style from the SMC big bosses, Petron and Ginebra may finally play up to the level of talent that they have.

3. How does this affect the PBA? Does this change anything?

RJ: This will have both a positive and negative effect on the PBA. First the positive, suddenly, the Governor’s Cup becomes even more of a must-see conference with all this added drama. I’m pretty sure that the PBA will be happy with the added eyeballs glued to their TVs or butts in the seats just to see how the SMC teams will react to all the changes that happened. The negative part? If things don’t turn around for Ginebra quickly, some fans may just boycott their team next conference.

Arnold: Eala’s departure from SMC’s operations in the PBA, in my opinion is going to do good for the whole PBA. In the last three seasons, there were a lot of young players who have the materials to be superstars in the league from smaller market teams who ended up with the SMC and found it hard to get a break that resulted to wasted potentials(thanks to Eala’s penchant in stacking up the three teams through hoarding of players). His departure may also lessen the lopsided trades and the unethical pirating of players and coaches from other teams. Another thing, SMC has been known to help the national teams in the past regardless of who the sponsors are but when Eala came, SMC has become strict in lending their players to help the national cause. Hopefully, this is something that will change when all the dust settles. All in all, this is going to be good for SMC and for the whole PBA as well.

Ven: I completely love Arnold’s point about the national team and hope that SMC finally relaxes its stance on letting their players play for the flag. As for the PBA itself, well… allow me to be idealistic to answer this last question. I wish that all three SMC teams are to be managed as individual teams. To some extent, we already see it with San Mig Coffee head coach Tim Cone calling the shots. Why can’t Petron and Ginebra do the same? God knows what that will do for the stability and credibility of the PBA. Will it happen? Probably not unless they get another high-profile (Pido? Jawo?) coach to head either Petron or Ginebra. All I want is a fair and credible PBA… libreng mangarap diba? 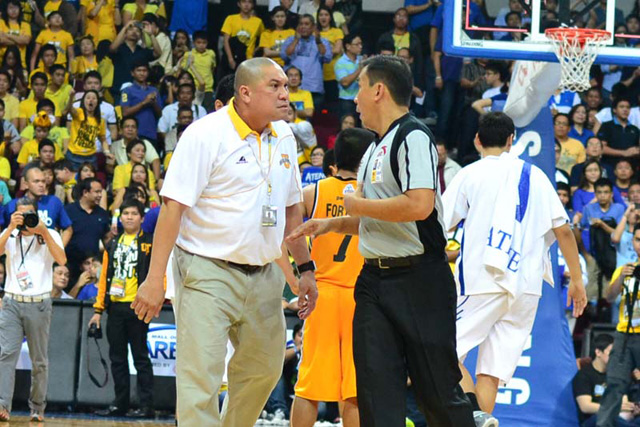 Will a coach like Pido Jarencio command the same respect from SMC management as Tim Cone? (Photo Credit: SlamOnlineph.com)

That’s it for this edition of the Humblebola Roundtable! Hope you guys enjoyed reading it as much as we enjoyed putting it together.

Agree? Disagree? Let us know in the comments section below! We’d love to hear from you.