Kraken vs. Blur: Breaking Down The PBA MVP Race After Two Conferences

[notification type=”note” title=”This article was first sent out to the HumbleBola newsletter, The Hoop Scoop.”]If you want first dibs on exclusive content straight to your e-mail inbox every week, join The Hoop Scoop here![/notification]

The Most Valuable Player award is arguably the most coveted, decorated and controversial award in basketball.

In the PBA, it’s mostly controversial.

This was especially evident when Arwind Santos, Mark Caguioa and Jimmy Alapag were crowned as MVPs during the 2013, 2012 and 2011 seasons respectively. Some said that Arwind and Mark’s respective teams did not succeed enough to warrant consideration for the award. There were also some that mentioned other names to be more deserving when Jimmy won the MVP in 2011.

Why all the controversy when it comes to the crowning of the award?

Well, one reason for this is the subjectivity of how VALUABLE a player is.

The same thing is bound to happen this year, as “The Kraken” Junemar Fajardo and “The Blur” Jayson Castro, are both having phenomenal seasons, along with a championship for good measure.

Get ready for the trash talk between fans of the two Gilas 2.0 stalwarts.

Get ready for the debates regarding the value of the player.

Thankfully, here in HumbleBola, we have the stats to show who among the two players is the most valuable.

How We Will Determine The MVP

To determine the MVP so far, we will be using a different, albeit slightly similar formula to that of the PBA’s.

There will be four main factors in determining the MVP. These are Value, Stats, Team Record and Intangibles.

Value will be determined via statistics instead of subjective comments that have no basis. The stats that will be used are the ORTG, DRTG, Win Shares and most importantly, the On – Off statistic of Fajardo and Castro. Also, the Shot Chart of each player will be taken into consideration as well, since this gives us a better look at how efficient (or inefficient) a player really is. 40 points will be allotted for this.

Team Record is pretty self-explanatory. We will take a look at how the player’s team performed, and the championship(s) that they won. 20 points will be allotted for this.

Intangibles is where it gets REALLY interesting (which pretty much means, this is where the arguing starts). For this, we will consider the Story of the player (how he performed in the eyes of the people, what he did to lead his team etc.), how the Media looks at him (since in reality the media really does have a say when it comes to the MVP) and the stuff that he brings to the team that don’t show up in the box score (PUSO, HUSTLE LOYALTY RESPECT etc.). We decided to add this factor despite our constant cry for objective analysis because hey, it does make the conversation much more interesting right? 10 points will be allotted for this.

Castro. Fajardo. Who will reign supreme between the two? Let’s get it started!

Other possible MVP candidates based on statistics and value as perceived by the public such as Greg Slaughter, Terrence Romeo and Paul Lee were not included in this article because in reality, the ones with the best chance of winning the MVP are those who have won BPCs, thus their exclusion.

Can The Kraken complete his quest for a back to back? (Photo Credit: Pranz Kaeno Biliones, Sports 5)

Junemar is the reigning MVP for a pretty good reason. He is the biggest guy on the court (most of the time), so he instantly attracts a lot of attention from opponents. He’s not just a big guy; he’s also a big guy with a lot of skill. He has one of the best low post arsenals in the country today. He has strength to compliment his height. Lastly, he has an ever developing mid-range game, so that should make opponents think whether they should give him space to operate, or they should close out on him because of a possible pull up.

His contributions on the less glamorous side of the court are also as important. The Kraken gives the Beermen an anchor on defense, and he uses his length and shot blocking ability to alter the shots of opponents.

The stats back it up. His value to the team is SOMETHING ELSE. When he gets out of the court, the offense of the team suffers, and that’s no thanks to SMB not having any other option in the low post. Since that’s the case, I give Junemar 40 points for value.

Fajardo’s stats are arguably one of the most well-balanced in the Association. Other than putting up the expected stats of that of an effective Center (Blocks, Rebounds) he also puts up solid offensive numbers. The former University of Cebu stalwart has one of the best scoring averages in the league, and at the same time, he’s one of the most efficient when it comes to putting the ball through the hoop.

If there’s one caveat when it comes to June Mar’s stats, it has to be his turnovers (2.5 a game). You may argue that he is a big man after all who has to go through numerous double/triple/quadruple/quintuple teams every game, but he has to find a way to take care of the rock for the sake of the team. Despite that, I’ll still give Junemar 29 points for this component of the MVP race.

SMB has one of the most bipolar team records. For the Philippine Cup, they pretty much ran over everyone (except Alaska during the Finals), then they performed poorly during the Commissioner’s Cup. This doesn’t help Fajardo’s case at all, since consistency is very much appreciated when it comes to those crowned MVP. For this, I will give Junemar 17 points.

This is where it gets interesting.

Junemar’s stats are DEFINITELY incredible, and that alone gives Junemar a crazy edge against all the other MVP candidates. The problem is, compared to other players, he isn’t exactly the most vocal. Sure you can argue that he is a humble, gentle and kind giant who is after all known for his quiet demeanor, but you could say that Kevin Durant is the same. He is known for his quiet demeanor and being a humble and laid back guy, but despite that, he still has that edginess that separates the stars from the superstars.

That’s not to say that Junemar isn’t a superstar. He is undoubtedly a superstar. Plus, despite him not being the most vocal of players, he still provides so much on the court. For one, his size is a pretty big plus for the team in terms of their offense (JMF commands so much attention) and their defense (his length can disrupt a lot of shots). Also, Junemar has a lot of PUSO (uh – oh here we go). Despite being injured, Fajardo still played majority of the Game 7 thriller against Alaska in the Philippine Cup Finals, and he put up a hell of a fight (21 points and 25 rebounds) all for the sake of a championship.

Finally, the media actually likes Junemar. He is a nice guy after all. The only thing that may get in the way of the media actually voting for him is the recency bias they may have for Jayson Castro, but that’s pretty much it. For Intangibles, Junemar gets 9 points. 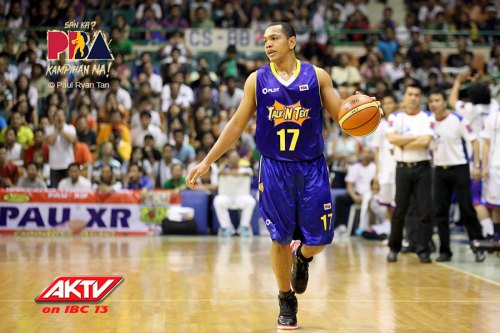 Based on stats, Castro isn’t as valuable as people perceive him to be. Sure he still has a decent On-off statistic, but the result that comes up isn’t as great compared to Junemar, his main rival for the coveted award. The Win Shares stat isn’t that kind also, as Jayson has 2.5 Win Shares, while Junemar has 4.0.

However, Castro averages 2.5 turnovers per game, something which isn’t that surprising since he is the main ball handler of the Tropang Texters, and he is prone to having the ball swiped off his hands because of his ability to penetrate inside the lane. For Stats, I will give Jayson 27 points.

Alongside Rain Or Shine, Talk ‘N Text is arguably the most consistent team in the league. The MVP backed squad has reached at least the semifinals for the past two conferences, and at the same time, they have been atop the league in terms of offense. If only they didn’t get swept by the Beermen in the Philippine Cup, I would have given them a perfect score. But either way, Castro receives 19 points for his team’s efforts these past two conferences.

This is where Castro shines the most; the intangibles that he brings into his squad.

As mentioned before, Castro is one of the main penetrators for the Tropang Texters’ three point heavy offense. He instantly attracts the defense with his speed and ability to finish, plus, he has the range to give opponents the fits when defending him one on one.

The most important intangible that Castro brings is his leadership. Recently, Jimmy Alapag retired, thus giving the Tropang Texters a big hole in terms of having a leader.

Castro was the one who took the reins as the leader of the Tropang Texters, and eventually, he led the team to a championship. He became more vocal within the team, and at the same time, his team mates respected him.

In terms of his reputation within the media, well, it’s never been better. He has the advantage in terms of recency bias, so all in all, Jayson gets 10 points for his Intangibles.

The race between Jayson Castro and Junemar Fajardo is one that is looking to be a memorable one. Clearly, Junemar has the edge in terms of stats. He’s the more efficient between the two (he does do most of his work inside so it’s a given), plus, his basic statistics are much more solid compared to that of Castro’s.

However, what Castro brings to the table in the MVP Race are his intangibles and the record that the Tropang Texters has. He’s the more vocal between the two, and, people are convinced that Jayson was the one who led the Tropang Texters to the championship. This is unlike Junemar’s case, where some people argue that the guy who led the Beermen to their championship was 2013 MVP Arwind Santos.

No matter, because for this version of the MVP Race, the winner is The Kraken, Junemar Fajardo!